You might think the words “award winning” and “peanut butter and jelly sandwich” don’t belong in the same sentence. But you would be wrong.

“I was surprised to win,” Orr says. “I thought if flavor was going to win I might stand a chance. I go by taste, not fanciness.”

The contest was held on a sweltering Sunday. On the PB&J’s Facebook page, Orr expressed gratitude to her helpers (food truck operators served $2 samples to fairgoers all day), to State Fair officials for spotlighting the diversity of mobile food vendors across the state and to the judges “for giving a simple sandwich a shot at being a winner.” 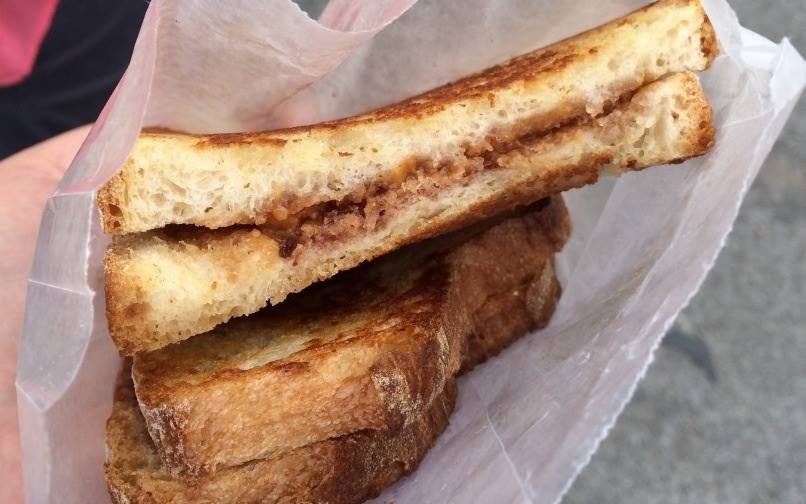 For the State Fair competition, Orr added toasted, chopped pecans to her sandwich for a bit of crunch. Usually, she sticks with the tried-and-true formula we know and love: peanut butter and grape jelly on store-bought bread that she describes as a cross between Italian and French bread. The bread is buttered and the sandwich is grilled until golden brown — and slightly oozy — and cut on the diagonal.

She used to set up her cart on weekdays in downtown Syracuse’s Armory Square, in front of the Milton J. Rubinstein Museum of Science and Technology (MOST). She didn’t like the “lottery system” for downtown street vendor spots and says the fees for the licenses and permits that are necessary for vendors to operate are excessive for what is a largely seasonal business.

Instead, she has been setting up at a variety of sites, such as St. Joseph’s Hospital Health Center and Costco in Fairmount, while construction was in progress. Orr has also taken part in the local food truck round-ups that have sprung up this year. She’s joining the Chicken Bandit, the STIR Mobile Eatery, Toss ‘n’ Fire Wood-Fired Pizza and others each Wednesday at the new food truck rodeo at Lyncourt Plaza, at Teall Avenue and Court Street.

Orr says her State Fair win has brought her some new gigs. She was invited to set up for the Sept. 12 National Drive Electric Week event at the MOST and for the Sept. 13 City Market in Armory Square. Publicity and good word-of-mouth have also brought a steady stream of customers wanting to try her award-winning sandwich.

“The amount of grilled peanut butter and jelly I’ve sold since the fair has been a bit crazy,” Orr says with a laugh.

Not in the mood for the childhood favorite? Orr’s menu also includes hot dogs, hamburgers, sausage, pepper and onion sandwiches (made with Basilio-Buda Italian sausage, from Canastota), grilled cheese sandwiches (plain and with special add-ons, like spinach and tomato), Philadelphia cheesesteak sandwiches and “American tacos” with chicken, bacon and ranch dressing.

With cooler weather coming, Orr is looking forward to offering items like homemade soups, chili, macaroni and cheese and goulash.

“Not just hot dogs and not just PB&J,” she says. “I love to cook and I love things that are homemade.”

For more information about PB&J’s Lunch Box and where you can find it, visit the PB&J’s Facebook page. Owner Pat Orr can also be reached at 884-9071.