Haudenosaunee have traveled internationally on passports from their sovereign nation since 1977. But for the second time in five years, the United Kingdom has refused to admit a Haudenosaunee lacrosse team, preventing the players from competing in a game their ancestors created.

The Haudenosaunee Nation Women’s Lacrosse Board withdrew its under-19 team from the 2015 Federation of International Lacrosse (FIL) U19 World Championship. The squad was scheduled to compete in the world tournament July 23 to Aug. 1 in Edinburgh, Scotland.

“I’m proud of them. They stood their ground,” said Oren Lyons, Onondaga Nation faith keeper and an All American lacrosse player at Syracuse University. “They understand the principles of sovereignty and identity.”

In 2010, the Iroquois Nationals men’s squad withdrew from its world tournament in Manchester, England, after several days of diplomatic efforts that included then-Secretary of State Hillary Clinton, then-Syracuse-area U.S. Rep. Dan Maffei and Rochester-area U.S. Rep. Louise Slaughter. British officials have said the Native Americans could enter the United Kingdom using Canadian or American passports in addition to Haudenosaunee passports, a compromise Lyons and others are unwilling to make.

“The right to identity is a fundamental human right,” he said. “Any compromise you make may be the end of your people. You can’t make that compromise to play a game.” 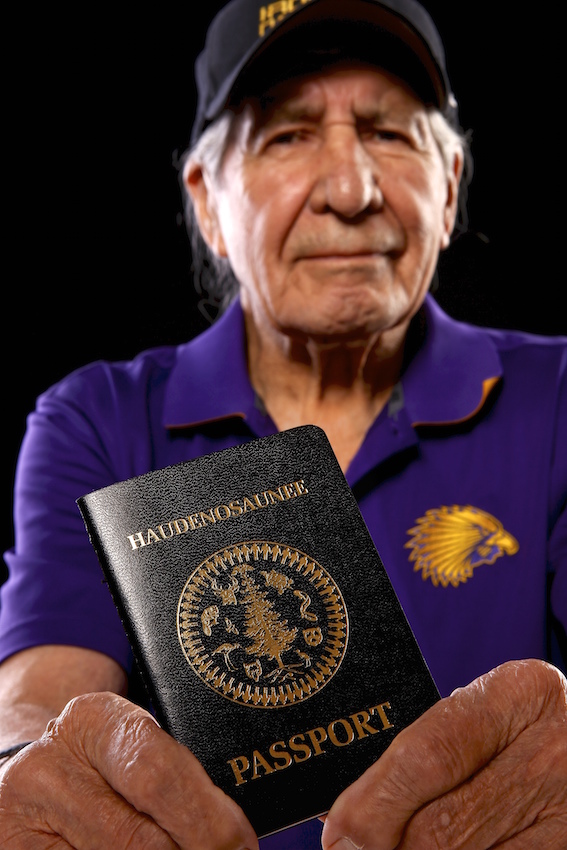 The Haudenosaunee Nation Women’s Lacrosse Board learned in February that U.K. officials would not allow the team to enter Scotland with their Haudenosaunee passports. But they were hopeful they could find an arrangement that would satisfy U.K. officials and the Haudenosaunee. With no agreement in sight, the under-19 squad withdrew from the tournament. About 30 people, including 18 players ages 15 to 19 who live on the Cattaraugus, Six Nations and Akwesasne reservations, had planned to make the trip.

“Of course they’re sad,” said Amber Hill, spokeswoman for the team. “They wanted to compete and represent their nation.” Hill is a former captain of the under-19 team and played lacrosse at Syracuse University. She now works for New York Life Insurance Company and plays on the women’s Haudenosaunee team.

“Our kids are brought up and taught the real history, that Columbus did not discover America and we were here first and we are the indigenous people,” Hill said. “They are raised to know who we are and who we represent. We’re not American and we’re not Canadian. We’re Haudenosaunee and we stand by that.”

Haudenosaunee Nation Women’s Lacrosse was founded in 2006 as the female counterpart to the Iroquois Nationals, which dates to 1983. The women’s team finished sixth out of 11 in the 2007 FIL U19 Women’s World Championship in Peterborough, Ontario. In 2011, they finished eighth out of 12 at the FIL tournament in Hanover, Germany.

When the team traveled in 2007 for the FIL tournament, Germany allowed them to travel on their Haudenosaunee passports and sports visas. They also traveled to the Czech Republic in 2009.

“The advantage we had in those places is we had a person who went to bat for us,” said Kathy Smith, who chairs the Haudenosaunee Nation Women’s Lacrosse Board. “The U.K. is very strict. There’s such a hierarchy there. They don’t bend for anyone.”

She’s confident that the United Kingdom’s position is based on security, not hostility to indigenous people. But the experience taught the girls an important cultural lesson, she said.

“Nobody wants to mix politics and lacrosse,” Smith said. “The reality for us is that it is political. There are bigger issues there.”

FIL president Stan Cockerton told LaxMagazine.com the organization could not resolve the passport dispute. “We cherish the history and culture of the Haudenosaunee as it has to do with lacrosse. And we are proud to recognize them, for our sport, as a nation,” he told the news outlet. “But we’re a lacrosse body. We’re not a political body.”

The United Kingdom will host the 2017 Women’s World Cup and 2018 Men’s World Championship. The FIL is also trying to get lacrosse included as an Olympic sport; if it does, both the men’s and women’s Haudenosaunee teams would like to compete, wherever the games are held.
“Hopefully, something will change that will clear the way to travel,” Smith said.

The passport flap comes ahead of the FIL World Indoor Lacrosse Championship at the Onondaga Nation, capital of the Haudenosaunee, or Iroquois Confederacy, from Sept. 18 to 27. Teams from 13 nations, including the United Kingdom, will participate in matches and cultural events at the Onondaga County War Memorial, the Onondaga Nation and the Carrier Dome. (For information, visit wilc2015.com.)

The championship is held every four years. In 2011, it was in Prague, Czech Republic. The defending world champion is Canada; the Iroquois Nationals finished second and the United States finished third.

“These games provide a historic opportunity to put the important issues of sovereignty and indigenous peoples’ human rights in the headlines while celebrating the thrilling game of indoor lacrosse on a global level,” Erick Weiss, chief operating officer and executive producer of the games, said in a news release.

Despite the United Kingdom’s refusal to accept Haudenosaunee passports, the Native Americans will welcome the team from the U.K.

“Our theme is friendship and world peace,” Lyons said. “Why would we provoke another country? So we extend our hand and hospitality.”

To the Haudenosaunee, lacrosse is a gift from the Creator. They’ve played the game they call Deyontsiga’ehs, “They bump hips,” for centuries.