Hot women like hot cars, right? And if a loser guy drives a hot car, the ladies will find him more attractive, right? The relationship between cars and sex appeal is accepted as gospel truth by many American men.

It turns out that a majority of women associate fancy cars with negative thoughts about the guys who drive them, according to a Harris Poll conducted in March on behalf of the dating website AnastasiaDate.

Fifty-six percent of the women surveyed thought men who drive exotic or fast cars are show-offs or arrogant, and 17% of the female respondents thought these men were insecure.

Only a fifth of the women (21%) said they thought a man was more attractive after they saw the car he drove.

The survey was conducted online and polled more than 2,100 American men and women on the relationships between attraction, “dateability” and car choices.
It concluded that women prefer men who drive sensible cars because they believe that reflects his level of stability. About a third (32%) of women thought that the kind of car a man drives will determine what kind of family man he will be. So, a guy who drives a Camry or an Impala, say, would be preferable to one who drives a Ferrari or a Corvette.

Almost half (48 percent) of the women said that a guy’s car reflects his economic status.

“It’s no surprise that men fantasize about driving an exotic car with a beautiful woman in the passenger seat, but this new data proves that fantasy is better left for a weekend with the guys,” said Lawrence Cervantes, AnastasiaDate’s chief communications officer, in a press release. “When it comes to dating, women want a grounded man, and his car is a clear reflection of this.”

As for the men’s survey responses, they weren’t as clear, but 38 percent of men surveyed said they see women who drive or ride in exotic or fast cars as being show-offs or arrogant.

The survey was created in anticipation of this summer’s Gumball 3000, an annual 3,000-mile international motor rally that will run from Miami to Ibiza, Spain, and include U.S. stops in New York and Atlanta. As one of the Gumball 3000 participants, AnastasiaDate will have two female members driving a 2010 Lamborghini Gallardo LP560-4 Spyder. These women were selected by the website’s user-base via a Facebook poll, and the car was selected as a nod to the opening scene of the iconic 1981 film The Cannonball Run for hard-core automotive fans. 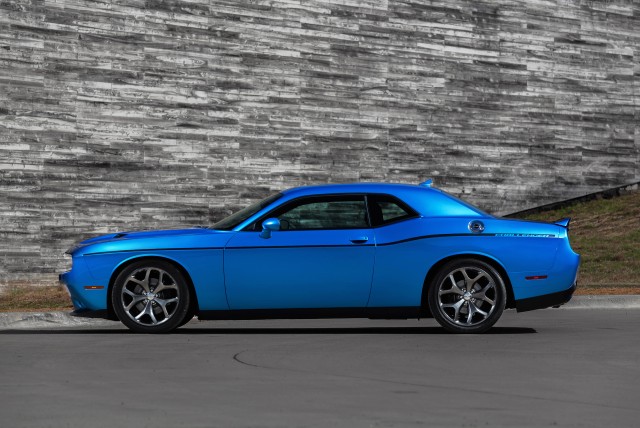 Fans of old-school muscle cars can finally get a look at the much-anticipated 2015 Dodge Challenger. The pony car still has a retro design, but the look has changed because it’s based on the 1971 Challenger, not the 1970 model, as was the previous generation of the car’s modern version.

The 1971 Challenger was the most potent version of the old muscle car, notes Inside Car News, and among the changes to the 2015 model from the 2014, is a deeper air dam, quad headlights with LED halos, LED taillights, a thinner front grille, larger bulge in the hood and revised front and rear fascias, according to Dodge.

ClingClanger is a new phone app that identifies weird sounds your car is making. It has a library of car trouble sounds you can compare yours to, and it will eventually have a sound-recognition feature to help make a tentative diagnosis. It doesn’t replace a real mechanic, but it can give you an idea of what’s wrong. It costs $1.99 and will cost when the improved edition is ready. – Autoweek