What do female elephants and humans who practice mindful parenting have in common?

Plenty. They are both present to their child in the moment with all senses switched, and they have a strong desire to communicate, protect and show affection. If they are fortunate, they also benefit from a community of caregivers.

“The elephants’ social structure is focused on taking care of the babies,” says Ted Fox, director of the Rosamond Gifford Zoo at Burnet Park.

Parenting for people can involve extended family members, and elephant calves are tended not only by their mothers but also by other females of the herd. Elephant moms and their female family and friends might be helpful examples for raising emotionally and socially healthy children. On the walkway overlooking the Asian elephant preserve, where two of the group—Kirina and her mother, Romani—are eating hay for lunch, Fox and John Moakler, collection manager, talked about elephant mothering and the tight bond and constant communication of the zoo’s elephants. 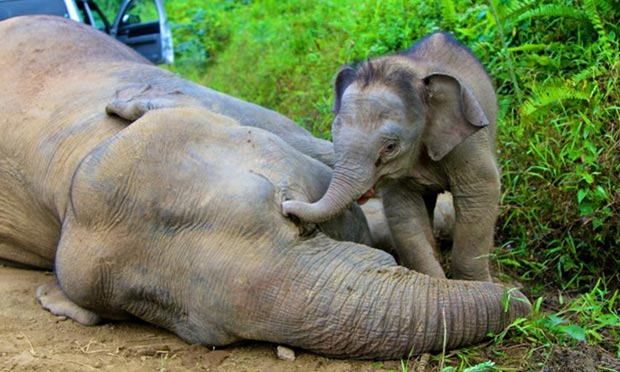 Mindfulness relies on sensory awareness to stay in the present moment.

Much of elephant childcare relates to their senses.

“Elephants are very sensory-oriented,” Moakler explains. “Calves use smell to find their mother to nurse. Elephants touch each other with their trunk or their legs.”

They flap their ears, move their bodies and show concern and affection. When one of the females was alarmed by something, Moakler saw another female come over to touch their back legs together.

“They communicate with {all} their senses,” he says. “They are very protective of each other. If a baby is scared by a woodchuck or something running across the grounds, they let out a series of chirps, trumpets, and they surround the younger one to protect them. They can be alarmed by anything from a snake to a turkey vulture or low-flying airplane. When a younger member is alarmed the whole group reacts to it.”

In addition to standing together against the perceived threat, with the young behind them, “There are ‘appeasement vocalizations’ to calm the baby down. The baby is the focal point of the social structure.”

Sharing emotions through communication is evident when family members or friends meet, especially after a long time apart. This is also a teaching time for their young. In 2011, the youngest elephant at the Rosamond Gifford Zoo, Chuck, his mother, Mali, and his grandmother Targa returned to the zoo after a temporary stay in Ontario. When Targa arrived, she gave her family a quick once-over and then turned her attention to Indy, at the time the zoo’s bull elephant, Mali’s father. She flapped her ears and vocalized frequently to greet him. When Siri, Romani and Kirina entered the barn, Targa and Mali began greeting them immediately with trumpets, toots, rumbles, squeaks and roars, which built to a deafening crescendo.

Finding joy in the present moment and expressing positive emotions in front of and to children of any species can strengthen their ability to do the same. We copy what we see. It is the same for elephants and people.

Elephants have another way they communicate called infrasound, a low-frequency language in a range humans can’t hear. Such sounds can travel for miles. Researchers say the infrasonic calls enable elephants to reunite with friends and family members. This type of communication can be felt early in the morning in the zoo’s elephant barn.

“You can feel it in your head and your chest,” Fox says.

“If you put your hand on their forehead, you can feel the vibrations,” Moakler says.

Human mothers can communicate with just a “look,” which reminds us to be aware of our silent signals and their effects. 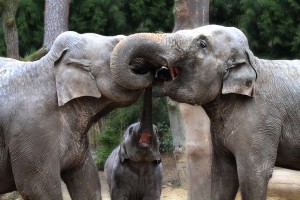 Elephants remind us of the benefits that a community can play in raising our young. “When Kirina was young,” Moakler says, “Targa helped out Romani. Targa {the zoo’s other older female} grew up in a social group, so she knew what to do.”

Elephant calves nurse frequently, and their mothers can get very tired. “The moms often pick ‘aunties’ to be their backup when they need to rest or sleep,” Moakler says. “Elephants are there for each other as a family group.”

Play is another important component of growing up well for humans and elephants. Typically, elephants begin a playing session by trumpeting, and engage in solitary play as well as group play. At the zoo, Moakler says, “One female in the group would toss around a ball by herself, but if her child wanted to play with it, she would step back and let them.” Group play is usually between the younger elephants.

As people, we have plenty of ways to play with our kids. Engaging in healthy fun activities keeps us active, while encouraging cognitive, emotional and social skills in our children. Taking time out to enjoy a quick game of PIG with a basketball or to play a board game gives us a chance to be “present” to our children, and it’s fun.

While elephants by their nature live in the moment, human parenting can benefit from the practice of mindful behavior.

Living in the present relieves us of pentup guilt, anger and frustration and also doubts and fears we may hold for the future. Research shows that incorporating mindful awareness into parenting can allow parents to stop and shift their awareness to view their present-moment experience within the context of their long-term relationship with the child and attend to their child’s needs while exercising self-regulation and wise choices.

Jane Agostini, president of Friends of the Zoo, relates the child-focused mothering style of Romani: “A few years ago, it was noted that Kirina was putting on weight over the winter {about 400 pounds}. It was discovered that Romani was allowing Kirina to eat her own dinner and then scoot over to her mom’s ration of hay and gobble that down, as well. Even as a teenager, Kirina’s mother couldn’t say no to her.” The keepers later managed Kirina’s mealtimes.

It is important for human parents to nurture themselves and their children, but awareness of a child’s needs is still vital. Mindful parenting and acceptance of our children and their needs allows for more satisfaction and enjoyment in the parent-child relationship. What might be considered the “terrible twos” or “dreaded teen years” can be re-envisioned as simply more daily opportunities for nurturing experiences, expressions of affection and shared good times.

Parenting experts suggest that bedtime can be an optimal bonding time for parent and child. Moakler, who has cared for elephants for 20 years, tells a sweet bedtime story: “One night, one of the moms got hay for food, but instead of eating it all, she threw it up in the air and covered her baby with it. The baby ended up very content, laying next to her, covered in hay.”

Affection shared, mothering done well, and one little elephant on its way to a good night’s sleep.