(Rant & Rave) Should you lose your job for a thought crime? Why can’t I enjoy the greatness of Wegmans?

WAR IS PEACE, FREEDOM IS SLAVERY,  IGNORANCE IS STRENGTH

Should you lose your job for a thought crime? One unrelated to your job? 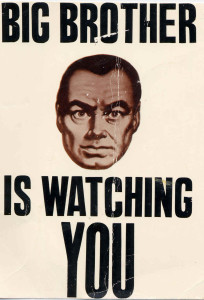 In George Orwell’s dystopian novel 1984, a thought crime is the criminal act of holding unspoken beliefs or doubts that oppose or question the ruling party.

Mozilla, the not-for-profit owner of the Firefox browser, hired and fired CEO Bendan Eich in a whirlwind 11-day span. Bad publicity centered on Eich from several groups led company officials to see him as a problem for its market share and business standing, and they got rid of him. (“Resigned” is the public posture, though resignation under pressure is pretty much the same thing as fired.)

Companies hire and fire CEOs for all kinds of reasons all the time, and it’s no problem, a big so what.

What’s a problem is this: “I never saw any kind of behavior or attitude from him that was not in line with Mozilla’s values of inclusiveness.” So said Mozilla Executive Chairwoman Mitchell Baker, in whose name the company issued its official statement on the firing.

But then, what had Eich done? A thought crime, the evidence for which is that six years ago he contributed $1,000 to California’s Prop 8, a state constitutional ban on same-sex marriage that was later nullified by federal courts.

That’s it, nothing more, and nothing central to his job at Mozilla: No claim of discriminatory behavior, or of behavior transgressing Mozilla’s culture, or concerning his operational or engineering talents. Note that Eich was no interloper at Mozilla. He was company co-founder, its chief technology officer for nine years and creator of Javascript and the Rust programming language. Impressive. But none of that mattered to the company or to his critics compared to that 6-year-old act, the proof of his transgression.

Baker’s official company statement on the firing pointed only to that prior act as making his relationship with the company impossible (“people are hurt and angry”), and then she said, astoundingly, that Mozilla’s culture “reflects diversity and inclusiveness” and that it “welcomes contributions from everyone. … Our culture of openness extends to encouraging staff and community to share their beliefs and opinions in public …”

Yet his views in 2008 were orthodox, held at the time by President Barack Obama, Hillary Clinton, and by the 7 million Californians (52 percent of the electorate) who voted for Proposition 8. They are views held by most people throughout history and still held today by devout Catholics, Jews, and Muslims. Are all these people to be excluded from future CEO searches, per Baker’s corporate executive criteria? Believing Catholics, Jews, and Muslims need never apply because job performance and accomplishment is less important than mental conformity. Think as we think, feel as we feel, now and forever, or lose your livelihood, standing and reputation. Is this really what she meant, or what any of us want?

I believe that the issues raised by this controversy are broader than any individual position on same sex marriage and are potentially destructive to core values of a civil society. Debate is good for an open and democratic society, but corrupting the language destroys any possibility of civilized discussion, and leads, as in this case, to acts of bullying and threats whose purpose is to deprive people of their livelihoods for reasons unrelated to job performance.

Bigotry is defined as “intolerance toward those who hold different opinions from oneself.” What this instance shows is that no one has a corner on it. It is one of those horrible vices that anyone can participate in, even those who consider themselves the most open and who often seem to call the loudest for tolerance and inclusiveness.

What should have happened? As a thought experiment, try this: Imagine Eich’s thought crime to have been the reverse of what it was, that he was drummed out of Mozilla for supporting same-sex marriage. What then would be the cry, and the outcome?

Bob Herz is a writer, editor and publisher who lives and works in the Syracuse area.

WHY DO WE NEED A ‘MAJOR’ SUPERMARKET DOWNTOWN WHEN WEGMANS IS IN DeWITT?

(Editor’s note: Last week, Nicole T. Samolis wrote in this space about people who whine about downtown parking. She and her husband, Kevin, moved downtown in March 2011. Today, we hear from Kevin.)

“The other lynchpin for downtown is a supermarket. A major supermarket,” laments Bob Niedt.

“The lack of a grocery store downtown has long been an issue for residents in the neighborhood,” comments Kevin Tampone.

I bet these talented Post-Standard reporters have visited a Wegmans grocery store once or twice; maybe even a member of their household goes once a week. They enjoy the vast selection and variety. The DeWitt Wegmans store has more than 50,306 different items. Yes, I counted online.

So Kevin and Bob, why can’t I enjoy the greatness of Wegmans simply because I live downtown? Why do I need a downtown grocery store to make my Dey’s Plaza apartment viable?

You drive to work downtown from your suburban Liverpool, Manlius and Cazenovia five days a week, yet one five-minute drive to DeWitt on Sunday afternoon to the mecca of food shopping is repugnant? The last thing downtown needs is a “major” supermarket. I don’t need to feel guilty driving past it every week on my way to Wegmans.

What about that midweek quart of milk or dozen egg? Syracuse is both a walkable city and a drivable city. I can walk the two blocks to Alamo’s Food Market for the eggs. But I’m not going to walk with 10 bags of groceries from your major downtown supermarket on Sunday. I am going to drive to the utopia of a grocery store, in DeWitt.

Syracuse itself is a major grocery store. This week we had a Thai pizza and steamed broccoli at Ale N Angus. It’s not on the menu, but if it’s in Matt Beach’s kitchen, he will prepare it however you want it. Monday was a long day at SKY Armory, so take-out from Otro Cinco was the ticket. Still blows my mind that I can get a three-course meal for two for less than $30. Tip: Always order the specials, you will enjoy a vast and ever changing variety of excellent Spanish and Mexican fare.

But don’t deny me the pleasure of shopping Wegmans with your romantic dreams of yesteryear about what a downtown should look like.

Kevin Samolis and his wife, Nicole, are redeveloping the former Wells & Coverly building, between South Salina and South Clinton streets.