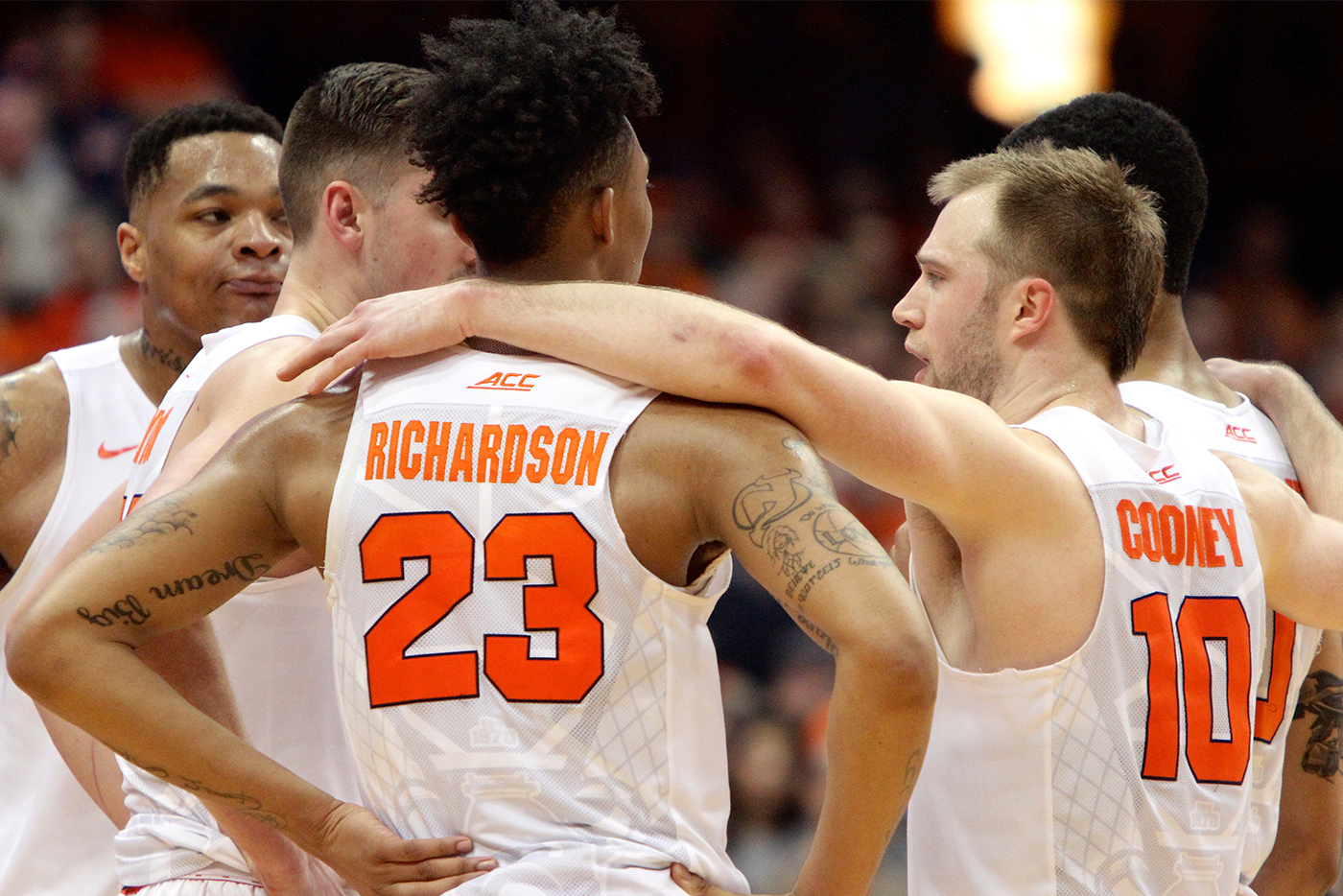 He was critical. He was snarky. He was dismissive. But more than anything in the moments following North Carolina’s 84-73 win over the Syracuse University men’s basketball team on Jan. 9 at the Carrier Dome, Orange coach Jim Boeheim was defiant. 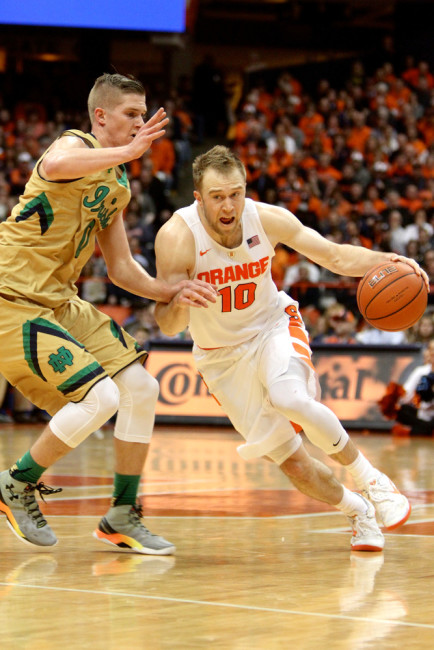 But how many out there really believed it? The Orange had lost its first four Atlantic Coast Conference games (and seven in a row over the last two seasons), there appeared to be deficiencies up and down the roster, and the ACC schedule wasn’t going to get any easier.

But once again, we should have listened to the 71-year-old Hall of Fame coach who has been going around this block for 40 years now. After that loss to North Carolina, the Orange had won five of its last six games entering the Feb. 2 game against Virginia Tech at the Dome.

During that stretch, the Orange defeated then-No. 20 Duke at Cameron Indoor Stadium (where once every 10 years or so an official’s late-game call actually goes against the Blue Devils), then-No. 25 Notre Dame, and a pesky Georgia Tech team that upset then-No. 4 Virginia earlier this season. Syracuse’s only loss was at then-No. 13 Virginia, where, as Notre Dame coach Mike Brey said, “No one wins.”

Yes, the Orange will be fine.

“I think they’re a confident team,” Brey said. “When you go down there and win at Wake (Forest) and then win at Duke within three days, you’ve got something to work with there. No one wins at Virginia, so I wouldn’t even count that one.

“I think Syracuse is an NCAA Tournament team, and obviously having Jim (Boeheim) back with them now, they have that look,” Brey said.

The Orange went 4-5 under assistant coach and head coach designate Mike Hopkins during Boeheim’s nine-game, NCAA-imposed suspension that ran from Dec. 5 through Jan. 5. No one with the program is saying the Orange would have done better with Boeheim, and clearly the team needed time to mesh with a forward-turned-point guard (Michael Gbinije); a shooting guard playing small forward (Malachi Richardson); a forward often playing center (Tyler Lydon); a center returning after missing two years because of injuries (DaJuan Coleman); and three freshmen among the team’s top seven players (Richardson, Lydon and Frank Howard). 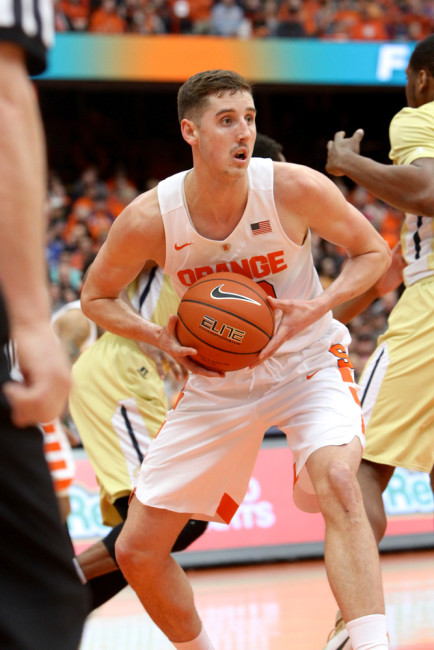 Still, there’s no question the Orange got its swagger back when Boeheim returned. Two recent examples: After getting into a scrum with Notre Dame’s Matt Ryan that resulted in a double technical foul, Richardson immediately answered with a 3-pointer; and, after getting poked in the eye “like the Three Stooges” by a Georgia Tech player, Gbinije sat out a few seconds and sank a 3-pointer as soon as he returned.

“We all had a positive mindset,” Richardson said when asked what the players were thinking after the North Carolina game. “We knew we weren’t going to be losing every game. It just took a collective effort and we needed everybody.”

Richardson, who’s averaging more than 15 per game and has made numerous clutch shots in ACC play, has been one of the keys to the turnaround. Junior forward Tyler Roberson, who was one of four ACC players averaging a double-double in league play entering the Georgia Tech game, has also stepped up his game. The defense, particularly in the frontcourt, has also improved.

“Like Coach Boeheim said, we had a really long season ahead of us so we had to keep practicing hard and getting better,” Roberson said. “We had to come together and keep fighting and things will turn around.”

With seven games remaining, the Orange now controls its own destiny as far as making the NCAA Tournament. And there’s more good news: Boeheim, who tends to know about these sort of things, said there’s still room for improvement.

“We still got a lot of work to do, I think, and hopefully we’ll get better,” he said. “Although I think we played well (recently), I think we can play a lot better and hopefully that’s what is ahead of us.”

“There’s no better guy and there’s nobody who means more to our basketball program than Dwayne Washington,” Boeheim said. “So I appreciate all that’s been done for him and the thoughts people have come forth with. It means a lot to me and means a lot to him.”

“For us, we hear the things like, ‘That team shouldn’t have been there, shouldn’t have done this or that,’ we overachieved,” said Jim Lee, one of the team’s stars. “But I’d rather be an overachiever in life than an underachiever and I think I speak for everyone on our team when I say that.”

The 1975 Orangemen finished 23-9 and won the Eastern College Athletic Conference title before losing to Kentucky in the Final Four.

“I think it’s the greatest feat Syracuse basketball has ever accomplished,” Danforth said. “It was the first time that it happened, and it’s always difficult to get over the hump the first time.”

That’s What He Said: Syracuse basketball coach Jim Boeheim on the ACC schedule makers who had the Orange playing three games in seven days before an eight-day layoff: “It’s just stupid. And it’s really scary when the people that are doing these things don’t see that. Really, really scary.”

News and Blues
South Side Supermarket Is Super News
To Top