Since the SU Orange’s predictable but still disappointing 0-2 start, SU has won two games by a combined scored of 106-17, found a starting quarterback in dynamic sophomore Terrel Hunt and unveiled all-blue uniforms with a funky helmet that’s a mix of metallic blue and orange.

Next up in this season of change under first-year coach Scott Shafer is SU’s first league game as a member of the Atlantic Coast Conference. And it’s a doozy.

The Clemson Tigers, who entered the games Sept. 21 ranked No. 3 in the nation in the Associated Press poll, will visit the Carrier Dome Oct. 5 at a time to be determined. Led by senior quarterback and Heisman Trophy candidate Tajh Boyd, the Tigers (3-0 with a home game against Wake Forest Saturday, Sept. 28) feature an explosive offense, swarming defense and one of the nation’s top kickers in Chandler Catanzaro.

After the SU Orange’s 52-17 romp over Tulane Saturday, Sept. 21 at the Dome, Shafer implored SU fans to fill the venue and make it rock against Clemson. In the Orange’s first two home games, against Wagner and Tulane, SU announced crowds of 33,299 and 36,128 in the 49,262-seat Dome.

“Let’s shake this place. Let’s have a blast,” Shafer said. “Let’s get our kids to play as hard as they can. Let’s get the fans juiced up to say, ‘You only live once, let’s have a blast.’ The best player in the country is coming into our house; let’s see if we can’t trip him up a little bit.” 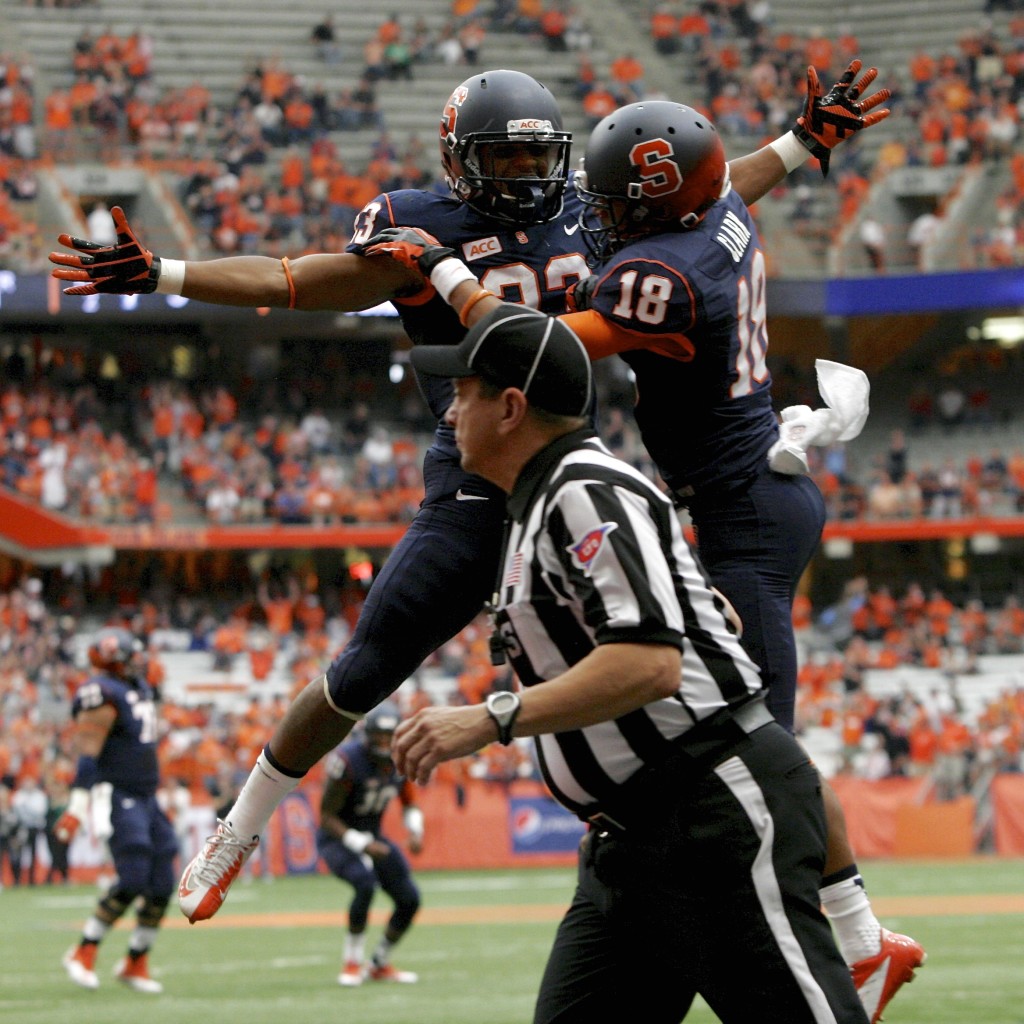 Three weeks ago, after then-No. 19 Northwestern humiliated the Orange 48-27, it would have been laughable to think SU had even a puncher’s chance against Clemson. But since Hunt replaced Drew Allen as the starting quarterback in the first quarter of the Wagner game, the Orange offense has been unstoppable–albeit against a Football Championship Subdivision (formerly Division I-AA) opponent in Wagner and a weak Tulane team.

Eleven receivers caught at least one pass against the Green Wave, and the Orange went 8-for-8 (seven touchdowns, one field goal) in the red zone (inside the Tulane 20-yard line). Hunt has engineered 19 drives this season; the Orange has scored a touchdown or field goal on 15 of them.

Of course, the SU Orange defense and especially its special teams did its part against Tulane as two blocked punts by Darius Kelly and Eric Crume and Devante McFarlane’s fumble recovery on a muffed punt set up three short scoring drives. The defense sacked Tulane quarterback Nick Montana–son of Hall of Famer Joe–three times and drilled him into the turf on several other occasions.

“The defense just kept giving us the ball, so our offense kept moving,” Hunt said. “It just made our job easier. We were right near the end zone every time we got the ball.”

Wearing all-blue for the first time against Tulane–the players said they love it, even if traditionalists cringe because there’s very little orange for a team called the Orange–SU recorded the 700th victory in program history. SU, which notched its first win against the Syracuse Athletic Association in 1890, joined Virginia Tech as the 15th and 16th programs in NCAA history with 700 wins.

“It means a lot,” Shafer said. “We have such a storied tradition here. It’s one of the most underrated traditions in the country, in my opinion, and I still think we have underrated fans. You can nitpick and say there we don’t have enough people here and I understand that, but the ones that are here I appreciate, I really do.”

This brings us back to filling the Dome against Clemson and the start of the Orange’s inaugural ACC season. Looking at the schedule before the season started, most fans were resigned to a 2-3 start with losses against Penn State, Northwestern and Clemson and wins against Wagner and Tulane. They figured, correctly, that SU’s bowl hopes will ride on the “swing” games against ACC foes North Carolina State, Georgia Tech, Wake Forest, Maryland, Pittsburgh and Boston College.

But now that Hunt and the offense have changed the vibe, and with a week off before the Tigers come to town, the fans and players can dream a little, right?

“Everybody is ready to go,” said wide receiver Chris Clark, who had four catches for 60 yards and a touchdown against Tulane. “We’re excited to bring them here. It’s the first ACC game. Bring them in here!”

“We’re going to all rehab and get our bodies right and get our minds in that playbook and scout and watch that team and be ready to play,” added linebacker Cameron Lynch.

But while acknowledging that Clemson will be the best and fastest team SU will play this season, Smith said the Orange can take advantage of the week off and give the Tigers all they can handle.

“I think we have to keep riding off this, keep riding the wave, and keep taking care of business,” Smith said. “Don’t change anything, and we’ll be fine.”

Tickets for the Clemson game are available at wwwcarrierdome.com/tickets, the Carrier Dome Box Office (Gate B), or by calling (888) DOME-TIX.

Before, during and after the Tulane game, Syracuse honored longtime SU athletic department official Rob Edson, who died Sept. 14 at age 45 from an apparent heart attack. Edson most recently worked as the athletic director at Onondaga Community College.

Rob’s wife, Sue, is an assistant athletic director for communications at SU and is the primary sports information director for the football team. After the Tulane game, Shafer said, the players signed a game ball for Sue Edson with the words “No. 2 for Sue,” meaning the second win of the season in her honor.

“God love their family,” Shafer said. “Great family. They will fight forward. Those {Edson} kids {Thomas and Tracey} are great kids, and they don’t get any better than Sue. It was an emotional week. Now we’ve got to keep fighting on and being there to support one another.”

SU’s Carrier Dome staff painted the initials “RE” in the west end zone, and a moment of silence was observed before the game. On the quad on SU’s campus, fans were able to purchase “Rise Up For Rob” T-shirts for $5 with the proceeds going to the creation of a scholarship in Edson’s name. OCC athletes had the idea for the T-shirts because Edson always encouraged athletes to “rise to the occasion.”

A New Era for SU Hoops
To Top