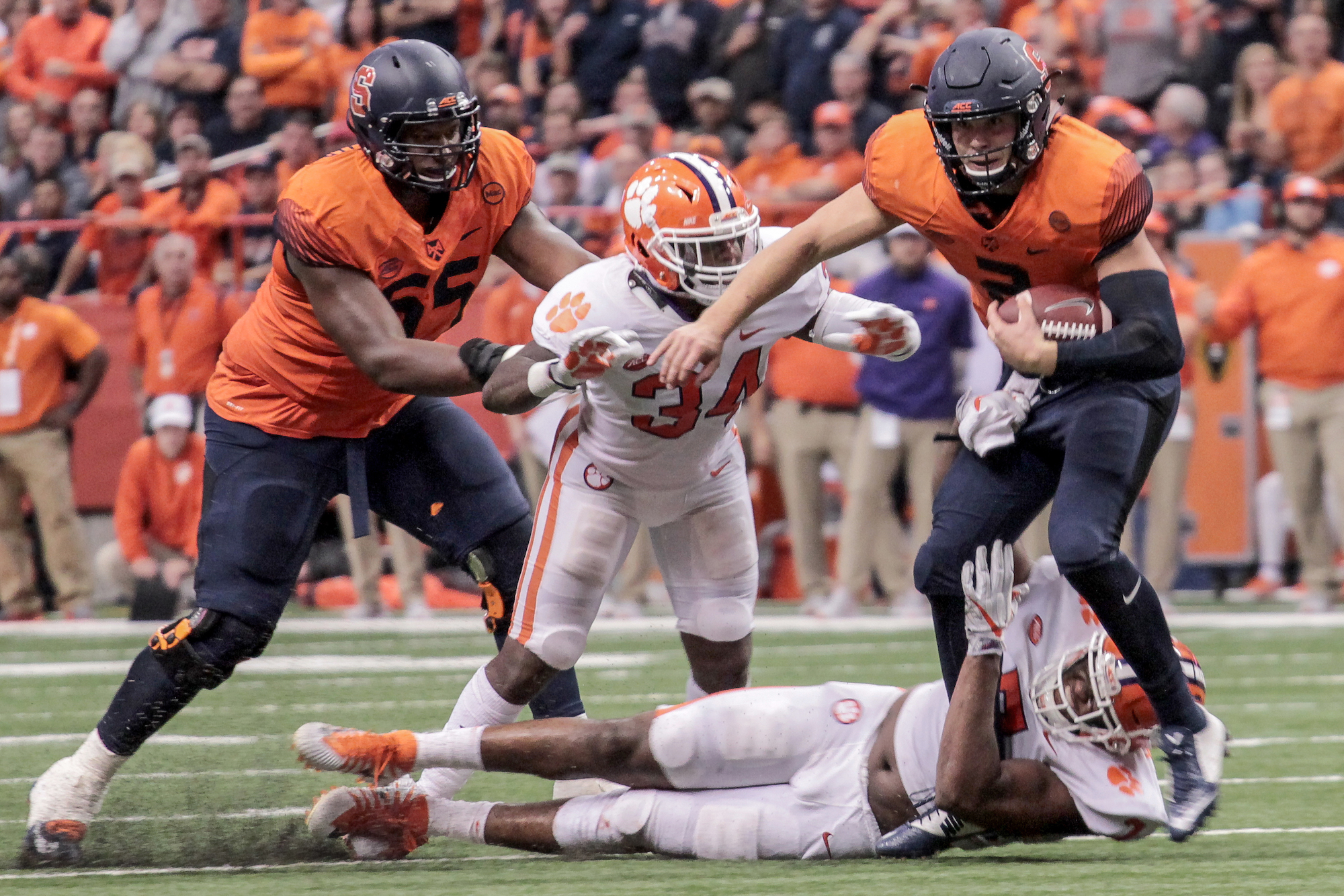 That was one of legendary Syracuse University football coach Dick MacPherson’s favorite “Macisms,” and that’s what he would have likely said to current coach Dino Babers after the 21-point-underdog Orange stunned second-ranked Clemson 27-24 Oct. 13 before a raucous crowd of 42,475 at the Carrier Dome.

Sadly, Coach Mac died in August at 86. His passing and the 30th anniversary of his undefeated 1987 team raised more questions than usual this year about whether Syracuse could ever reach those lofty heights again.

For MacPherson, the watershed moment occurred during his third season in 1984, when the Orange upset No. 1 Nebraska 17-9 at the Carrier Dome. Three years later, Syracuse went 11-0-1 and finished fourth in the nation — its highest ranking since winning the national championship in 1959. The 1987 season started a 15-year run under MacPherson and Paul Pasqualoni that included a 127-49-4 record, a 9-2-1 record in bowl games, and nine Associated Press top-25 finishes. 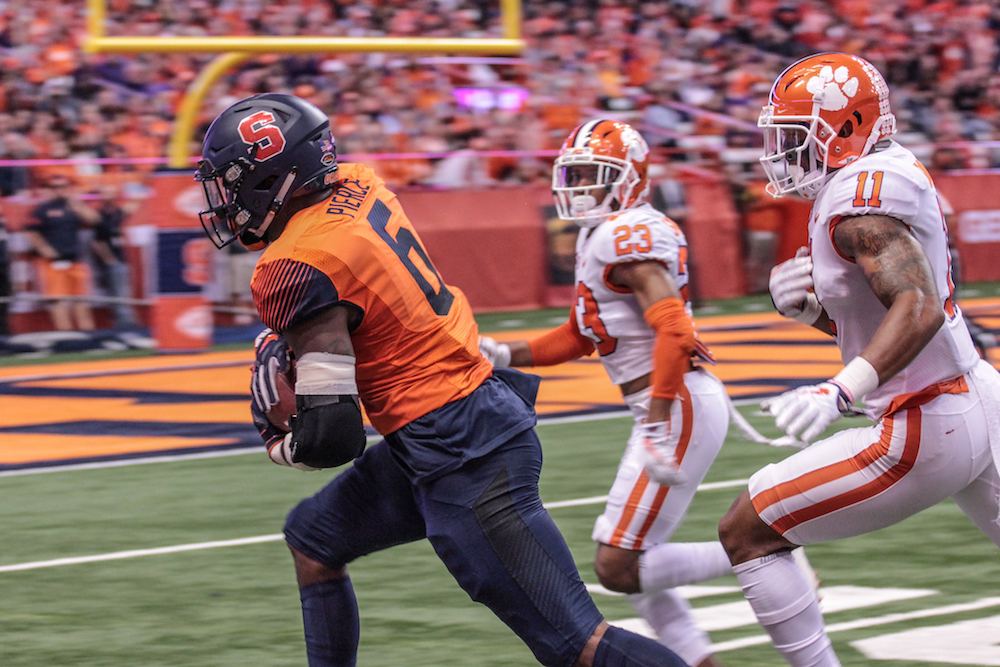 Those days seemed long gone, but now Babers and the Orange have given SU fans hope that Syracuse is not destined to be a middling Atlantic Coast Conference team that will never challenge the likes of Clemson, Florida State and Miami.

“This is big. Capital B, capital I, capital G. Full caps, exclamation, exclamation (Translation: BIG!!),” said SU athletics director John Wildhack. “I’m so proud of coach, our staff, our team and thankful to our fans. Coach and his staff put together a great game plan, the team executed it, and the fans were huge. They made a difference. The 12th man was there, the 12th man was impactful. There’s no question.

“Tonight’s a big, big step forward,” added Wildhack, who was a high-level ESPN executive before moving to SU in July 2016. “Now we’ve got to figure out how we get better, right? The fact that it was on national television — ESPN, prime time, the only college football game — it’s a great showcase for the program and a great showcase for the university and our community.”

Babers promised big things at his introductory news conference in December 2015 and for the most part he has delivered. On paper, last year’s team wasn’t any better than the 2015 squad under Coach Scott Shafer (both teams went 4-8), but the 2016 Orange did notch a signature win over No. 17 Virginia Tech at the Carrier Dome. That victory and Babers’ epic “Whose house? Our house!” post-game locker room speech that was captured by ESPN probably gave the program more national exposure than it had received in the previous 11 years combined under coaches Greg Robinson, Doug Marrone and Shafer.

ESPN also captured Babers’ post-game speech following the Clemson game. And while it was more “He Ain’t Heavy, He’s My Brother,” than last year’s “Brother Love’s Traveling Salvation Show,” the speech shows a coach who clearly cares about his players and emphasizes respect, family and academics as much as football.

“The thing about the locker room is that you get to look into those young people’s eyes. And when you’re looking at them, and they’re looking back, there are certain things you know they will never forget,” Babers said. “How would you like to do something positive that somebody would never forget for the rest of their lives? They’re going to see more days than I’m going to see, and (it’s great) to know I put a mark in time and on 124 people’s lives. They’re going to live a heck of a lot longer than me, I can promise you that, so that’s really special. That’s what coaching is all about.”

But getting his players to believe and “buy in” was still only half the battle for Babers and the Orange. In the end, Syracuse had to outplay a 6-0 Clemson team that had the nation’s longest winning streak at 11 games and one of the nation’s top defenses, and appeared headed for a national championship rematch with No. 1 Alabama.

And this was a Syracuse team that lost at Clemson 54-0 last year, lost its final four games of 2016 (albeit with starting quarterback Eric Dungey sidelined by injury), and lost to Middle Tennessee — Middle Tennessee!!! — just five weeks ago. The Orange did play well on the road in losses to No. 25 LSU and North Carolina State, but as Dungey asked after the Clemson game, raise your hand if you thought Syracuse had a prayer to cover the 21-point spread against the Tigers, let alone win the game.

“Show of hands: Who thought we were going to win today?” Dungey asked the media as one hand was raised. “Like I was saying (in the locker room), nobody believes in us except us, and that’s fine. At the end of the day, this feels good.”

Wildhack wasn’t sitting with the media at the time, but his hand went up, too. 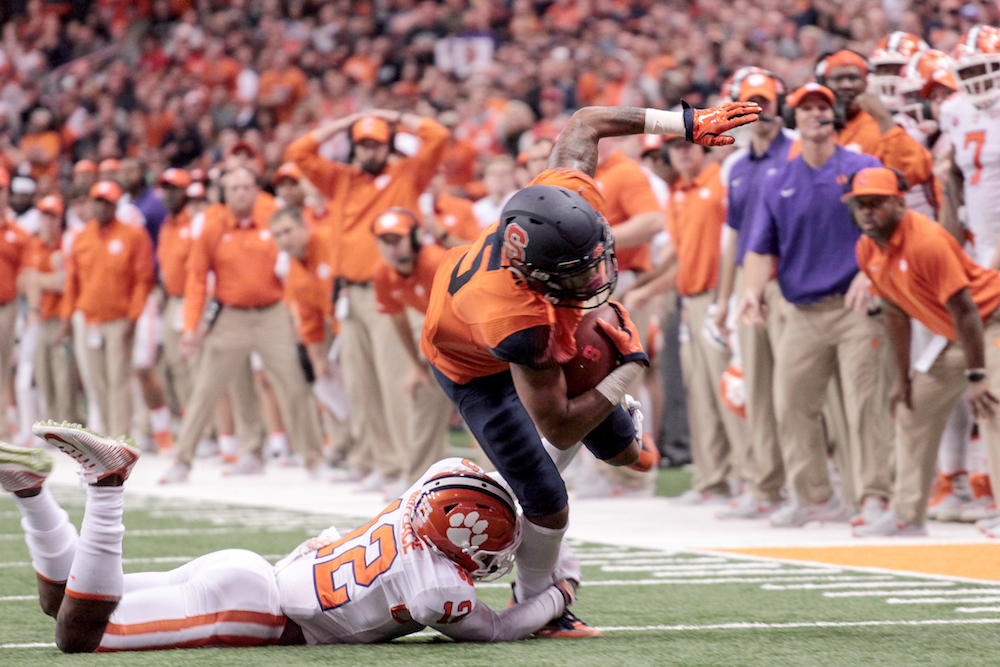 “Yes, I did,” he said when asked if he honestly thought the Orange had a chance. “I’ve seen the growth of the program in the 14 months I’ve been here, I have the privilege to work with Dino and his staff and see the development of the kids, and you see them come together as a team. You see the culture of the program change. So yeah, tall order? Absolutely. But I never for a second thought we could not win. We’d have to play really, really well and we did.”

The signs were there from the start, as the Orange scored a touchdown on the game’s opening drive and never trailed, although Clemson did tie the score at 7, 14, 17 and 24. Dungey was the difference as he completed 20 of 32 passes for 278 yards and three touchdowns and rushed for 61 yards against a Tigers defense that had allowed only 264.3 yards and 11.3 points per game.

In fact, the Orange scored more touchdowns in the first three quarters (three) than Clemson had allowed in the first three quarters ALL SEASON. And with the game on the line in the fourth quarter, Dungey sealed the win with a 15-yard completion to wide receiver Steve Ishmael on a 3rd-and-11 play from the Orange 49-yard line and a gutsy 8-yard run on 3rd-and-8 from the Clemson 34.

“It’s a heck of a win against us. We’re not an easy out, at any time,” said Clemson star defensive tackle Christian Wilkins, one of four Tigers defensive linemen that are likely headed to the NFL. “That quarterback, No. 2, he’s a heck of a player and he got my respect tonight.”

The Orange outgained Clemson 440-317, in large part because Syracuse converted 8 of 19 third-down plays while the Tigers were 2 for 11. The Orange defense, which is one of the most improved defenses in the country, knocked out Clemson quarterback Kelly Bryant in the second quarter as he suffered a concussion on a hard tackle by Syracuse defensive tackle Chris Slayton.

“That is what it looks like when we put together a full game,” said Syracuse senior linebacker Zaire Franklin, who had one of SU’s four sacks. “We played LSU and it didn’t come out the way we wanted it to. Same with NC State. Clemson is the best team we have played all year and we finally decided to come together and put a game together. In the grand scheme of things, we accomplished something major, but for us it confirms everything we have been working hard for.”

Clemson committed 11 penalties for 119 yards and missed two makeable field goals. But Coach Dabo Swinney, who proved that losing coaches can show class, both credited Syracuse for its win and visited the Orange locker room after the game to congratulate the players.

“Obviously, we’re very disappointed. There’s a lot of pain in our locker room, but this is a story about Syracuse,” Swinney said. “This isn’t about Clemson, it’s about Syracuse. They outplayed us, and our coaches and I give them a ton of credit. This was a football game that they flat out wanted more than we did and that’s 100 percent on me.” 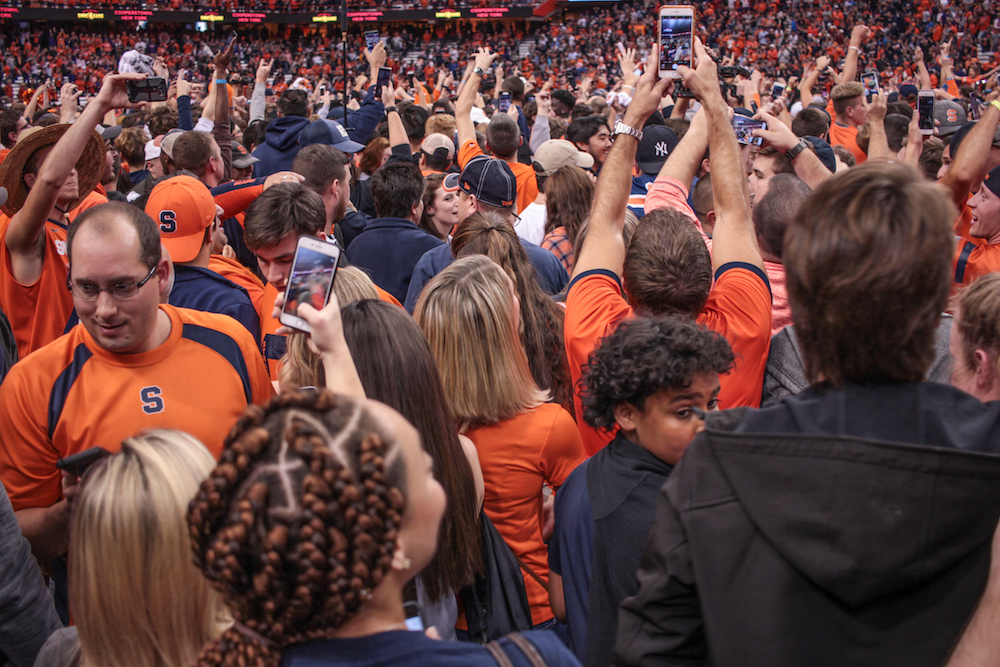 Babers said he expects Clemson will win out and still have an opportunity to play for the national championship. If that’s the case, Syracuse’s win will be mentioned countless times as analysts and pundits compare Clemson’s resume to other playoff contenders.

That can only help with recruiting, as will SU’s first appearance in a bowl game since 2013. To that end, the Orange (4-3) needs to win at least two of its five remaining games, starting with the Saturday, Oct. 21, 3:30 p.m. matchup at No. 8 Miami (telecast on ESPN).

According to his former players, another favorite Coach Macism was “Men, learn to do what you do.” To reach a bowl and continue in the direction Babers wants to take them, the Orange would be wise to take that advice and learn from the win over Clemson and what it takes to beat powerhouses on a regular basis.

“For me, it’s just a win. All that is awesome, but like Coach Babers said, he expects us to win,” Dungey said. “At the end of the day we beat the No. 2 team in the country, but that’s what he expects from us and what we expect from one another. We still have five games left in the season, so we need to get to work.”