District Attorney William Fitzpatrick first came to Syracuse from New York City in 1970 to study journalism at Syracuse University’s Newhouse School. “I always wanted to be a journalist,” he reflected in the Syracuse New Times’ Oct. 23, 1991, cover story “Mr. District Attorney.” “I was editor of an alternative newspaper in high school. The school’s newspaper stunk, and I hated the guy who ran it.”

Yet he did have some pleasant memories while writing for the Xaverian High School newspaper in Brooklyn. “My first interview was with Stan Lee,” he recalled recently. “Marvel Comics was very popular.” In the 1970s he also worked as a ramp supervisor for Pan American Airlines at JFK Airport, where he met Liz Taylor, Jerry Lewis, Jimmy Stewart and lots of sports celebrities.

But aside from occasional slamming roasts of local celebrities — “He went to Colgate and got a 3.8,” he noted of an area journalist, “but that was his blood/ alcohol content” — his professional encounters tend to be more hard-headed.

In his junior year at Newhouse, Fitzpatrick applied to SU’s Law School and was accepted. Immediately after graduating in 1976, he went to work in the Onondaga County District Attorney’s office’s law unit. Moving up to the felony trial unit, he became a senior assistant district attorney in 1980. He was named chief assistant district attorney in 1983, the youngest person ever appointed to the position. He was eventually responsible for overseeing all homicide prosecutions in the county.

He provides active leadership for several local, state and national professional associations and has been involved with Vera House, McMahon/Ryan Child Advocacy Center, Ronald McDonald House and the Make a Wish Foundation

People say if there’s one thing about you is that you’re fair. How hard is it to be fair?

That’s a great question, and it’s a nice compliment. I appreciate people saying that because sometimes what’s fair to me isn’t fair to the other side and so forth and so on. Especially in the criminal justice system because you deal with all of the societal ills that are laid on my lap, whether it’s race relations, mental illness, opioid addiction. So if I’ve got a suburban kid from Fayetteville who’s white and he goes into a store with a gun and he gets probation, and I’ve got some African American kid on Shonnard Street and he gets 10 years, then I shouldn’t be the DA.

So I ingrain the golden rule every single day into my staff: Treat people fairly. How would you like to be treated? Treat victims fairly, get their input. They don’t control the case, it’s a public case, but let’s hear what they have to say before we dispose of the case. 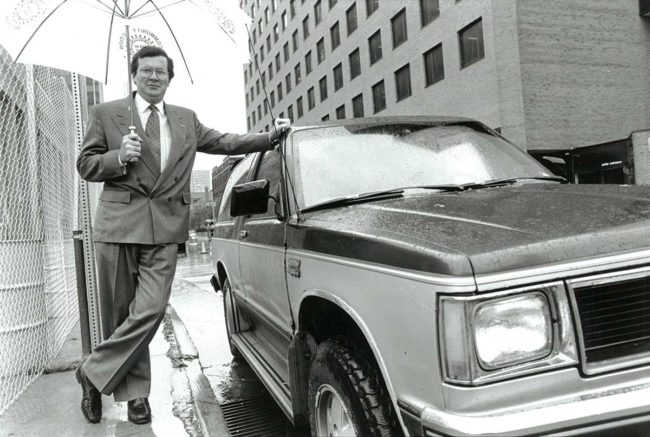 Do you reach a point where there is no legality, if that’s the proper word. What do you do then?

Well, if I understand your question, there’s legally something. For example, when I took office I started the first diversionary program in the state of New York north of Brooklyn. It was legal to send people to jail for 25 years for selling a gram of cocaine. A dollar bill weighs a gram. And there’s some historical data to support the fact that after the Civil War, after the Emancipation Proclamation, that people in the South weaponized criminal justice statutes to effectively beat down the black man, and some of these issues translated into voting rights cases, civil rights cases and the civil rights murders of the 1960s, all of which led us into where we are today.

One other thing about you is longevity. Have you studied term limits?

Well, there are no term limits for DAs. In fact, my colleague in Suffolk County challenged that and was successful when they tried locally to impose term limits on DAs.

Look, if a person is doing a good job like Syracuse Mayor Tom Young — who I thought was maybe one of the best, if not the best mayor I’ve ever dealt with, just a phenomenal guy — why should he have been forced out of office after two terms because of an arbitrary law so other people could run and try and take his job away from him?

I don’t think there is any job, and I say this with some degree of personal interest, where experience counts more than the DA. There isn’t a case that’s going to be laid in front of me that I haven’t seen before or heard of before or know something about. It’s not a job for amateurs or thrill-seekers.

Is there a need for some limits on free speech, such as for Saturday Night Live performers?

Ha ha ha, no, that was a total joke about Pete Davidson (the SNL regular who badmouthed Syracuse after shooting a movie last summer in Central New York). I hate to admit that I’m a square, but I remember the good old days of Saturday Night Live with Chevy Chase and John Belushi and Dan Aykroyd and Gilda Radner. But Davidson took a shot at my community, and I thought it was incumbent upon me and other people to just stand up for our community.

It was a silly effort to get a cheap laugh. I know the hotel he stayed at; it’s absolutely beautiful, my son got married there. So to say it’s like the worst hotel he’s even been in, well, don’t come back, we’re just fine without you.

And if you’re driving a luxury vehicle at 3:30 in the morning and you’re wearing your bathrobe and underwear and you’re speeding, the Manlius cops are probably going to pull you over. And by the way, they had no idea who he was. We supposedly targeted him? And then after he gets pulled over and arrested in Manlius, he trashes Syracuse. If I get pulled over in Vail, New Jersey, I don’t trash Manhattan.

If there was an expanded use of the death penalty, do you think it would impact the violence that’s growing in our community?

Let me answer first that we’ll never have the death penalty in New York in our lifetimes. That’s a fact, it’s never gonna come back. We could have the worst crime surge in history, and the Legislature and this governor will never sign it into law.

We had one death penalty case during the 10 years that the death penalty was on the books in Onondaga County: James Cahill. I have never seen, in my 40 years as a prosecutor, a more deserving candidate for a needle than James Cahill (who assaulted and poisoned his wife in 1998). But with that said, the joke was on us as prosecutors. The joke was that the Court of Appeals was never going to allow that statute to stand on a constitutional basis.

There is data done by independent universities, particularly the University of Michigan, where people were surprised at the results that the death penalty actually does work as a deterrent. But you have so many other aspects: the racial aspect, the cost aspect, what you drag the victims through. So it’s an issue that I’ve dealt with in my past but will never deal with again in my lifetime.

What’s with this violence in the community? It seems to be growing.

It does seem to be growing. I think some people are confused about the raise-the-age legislation, in this sense, that immediately upon public comments by the governor and the Legislature, I think the word got out erroneously in the community that 13-, 14- and 15-year-olds could basically do whatever they wanted and they were going to Family Court. That’s not true. But if you look, you’ll see a direct spike in juvenile violence in relation to those comments. So the word is slowly getting out that if you’re 14 and you kill somebody, you’re going to be prosecuted in Adult Court, and I thought that it was a solution in search of a problem.

In Onondaga County, under my administration, if you take 100 juveniles, 95 of them are going to exit the system with no record whatsoever. Five out of the 100 may be pleading to misdemeanors; they may get what they call youthful offender treatment, they may have been sent to prison because they’ve committed a heinous crime.

But the problem, as I’ve said many, many times in my career, is the lack of family structure. And I don’t care what the family looks like. It doesn’t have to be mom and dad, it doesn’t have to be Ozzie and Harriet. It could be dad and dad, it could be mom and mom, it could be grandma and grandpa. As long as a child is raised with a structural, loving and nurturing support of a family, he or she, I think, is going to get some intrinsic values that are inherent to every human being.

When you don’t have that, what do you do? You gravitate toward a gang. You get structure. You get comfort. You get support. And you also essentially become a Lord of the Flies sequel.

You know, look, I’ve done both. I’ve had opponents: One was a very, very gracious woman who’s now a judge and another person who really had no business running for anything. But with that said, I mean there’s no suspense, it’s over.

But being a competitor, in my gut, I prefer an opponent. Let me talk about my record, let me talk about why you think you’re more qualified to hold this office than I am, and let the public decide. And the worst thing that happens to me is I lose an election and go back to private practice and make a million bucks a year. I don’t think I’ll be that unhappy. 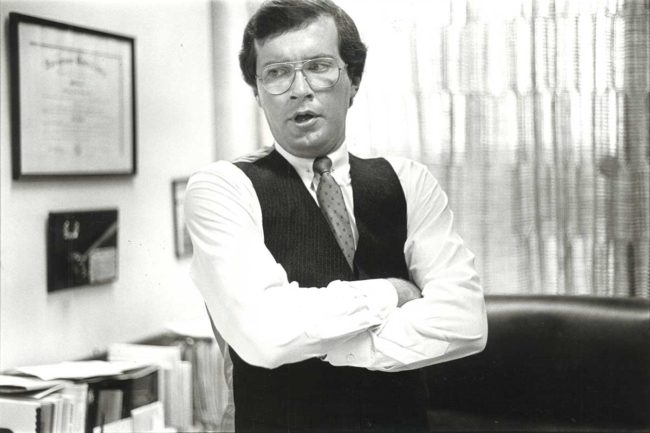 What would you consider the most major contribution you have made to this community?

Well, let me talk about the national community first. The most major contribution would be the investigation of child deaths, which are now completely different in the United States as a result of a case that I handled and brought to the public’s attention, and that was Waneta Hoyt (the serial killer convicted of murdering her five children from 1965 to 1971; for more than two decades it was believed that the children died from sudden infant death syndrome). Prior to that, if you look at the SIDS rate in the United States, the “back to sleep” campaign started at about the same time that Dr. Steinschneider’s theory about sleep apnea was being debunked by the Waneta Hoyt trial. And then you look at the SIDS rate after she was convicted, and they’ve gone down dramatically. And part of that is because some SIDS cases — a very, very small minority, but some — are, in fact, homicides.

In terms of local impact, honest to God, it would be voluminous, and I say that with pride and I say that with accuracy. Let’s start with the Forensic Science Center. It wouldn’t have come together without me. Let’s talk about the combined Abused Persons Unit, let’s talk about the McMahon/Ryan Child Advocacy Center.All these things, I’ve had my hand in. The Crime Analysis Center, which has been bought here with my leadership and my relationship with people in Albany. The Office Involved Shooting Protocols that we have. The recent School Safety Task Force Report that we did that has been almost universally acknowledged as being a really, really good piece of scholarship and law enforcement.

So if you take away one thing from my 28 years in office, take away that I insist that people leave the BS by the door and come in if you’re a player and want to get things done, and you really care about safety and the wellbeing of this community.

How long can you do this job?

Well, I’m 66. I’m in very, very good health, according to my doctor. My wife has to retire in four years because she’s a judge. My children are grown. So the answer is. . . I don’t know.