Back in the 1950s, folks around these parts were actively following the exploits of the Syracuse Nationals professional basketball team. Although the team’s moniker was discarded when the Nats relocated to Philadelphia in 1963, the Syracuse Nationals name is now attached to the largest car show in the Northeast.

The event returns to the New York State Fairgrounds on Friday, July 20, through Sunday, July 22. That’s when hundreds of classy chassis, accompanied by their watchful owners, will display their shiny hubcaps and hyper-vibrant paint jobs as they park everywhere from the grassy space at Chevy Court to the 4-H building’s distant location.

Not that far away from those highly polished vehicles, however, the fair’s Beef Cattle Barn hosts the 1950s-flavored Ol Skool Roundup, a slightly disreputable showcase for maverick motorheads, not-quite-junky jalopies and shade-tree mechanics of all ages. Adding to the roundup’s outlaw vibes are a pinup contest with ladies dressed in retro fashions (accent on the ruby-red lipstick) and pulsating rave-ups from rockabilly bands.

The roundup returns for its 11th stand with an organizer nicknamed Sparky again in the driver’s Tuccarole seat, as he recalled the sideline event’s debut:

“Well, (Nationals founder) Bob O’Connor came to me one day at the Nationals and said, ‘Hey Sparky, do you wanna start an old-school show?’ I said yeah and he said, ‘Well, you can use the lot across from the Center of Progress for a Saturday show from 9 a.m. to 4 p.m.’ When we started out the first time we had 45 cars. Now we have almost 1,000 cars showing up over the weekend.” 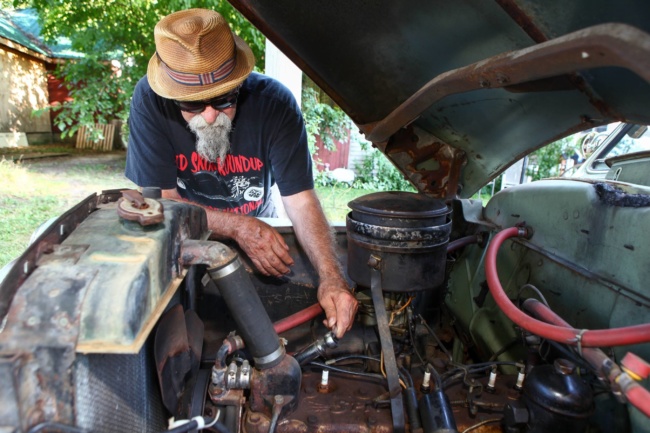 As the Syracuse Nationals has mushroomed into the country’s second-largest car show (the annual event at the Minnesota State Fairgrounds in St. Paul “is a little bit bigger and has more cars,” according to Sparky), the Ol Skool Roundup has also acquired a devoted following. “We pick out the vendors who have stuff so people can build old school cars and rat rods,” Sparky said, “and they usually sign up right after the Nationals for the next year. I got one vendor coming in from Montana.”

In fact, Sparky feels that the state fairgrounds could take in even more vehicles. “There are places they don’t even park in where they should be parking,” he said. “And there are some really cool places over across from us, like the old horse barn, but they don’t use it. They’re afraid because they’re on a hidden path. But once people know that cars are there, then they’ll go see them.”

The lures of Nationals attendees drifting down to the Beef Cattle Barn are fairly obvious for Sparky: “We have the rockabilly bands, we have the pinup contest, we have the spark plug contest. And the Wall of Death, which hasn’t been in Syracuse in 60 years, will be right across from us.” The motorcycle stunt that takes place within a wooden cylinder will be fondly recalled by fans of the 1964 Elvis Presley circus musical Roustabout.

While starting a pinup event seems like a no-brainer, Sparky did encounter one minor obstacle. “I asked Bob O’Connor if we could have a pinup contest and Bob said, ‘What’s a pinup contest?’ I said it would be girls dressed from the 1940s and 1950s. The first year we had 10 girls, and now we’ve got the biggest pinup contest in the country. We had 46 girls last year.”

Yet Sparky maintains that the Ol Skool Roundup is mostly about appreciating, and not forgetting, classic automobiles. “What’s so cool about these rat rod guys is that it’s the younger generation,” Sparky noted. “Some of these kids are 19 or 20 but they look like they came out of the 1950s. And the way they build these cars is so cool. Everybody thinks a rat rod is a piece of junk but each one of them is a piece of art.” 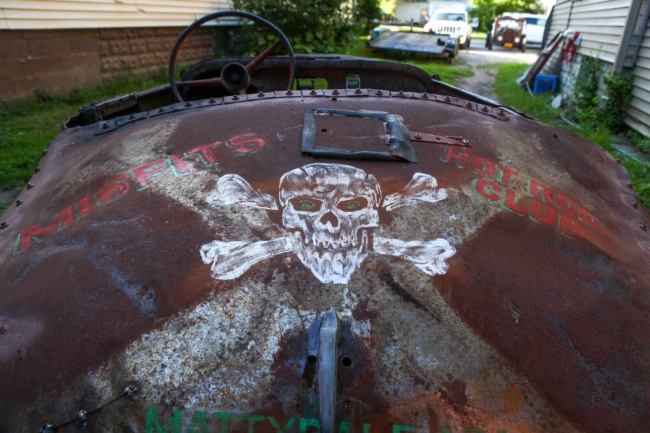 Aside from his Ol Skool Roundup duties, Sparky still has a full-time gig at the Cicero Pep Boys location, handling delivery work for the area’s other shops. And he has a tale to spin about his nickname:

“Well, that story happened about 11 years ago when I had a hillbilly truck. I used to go around to all the fairs and stuff and the truck’s nickname was Sparky, and it stuck with me. When I got rid of the truck it had over 75,000 signatures on it and now it’s down in North Carolina at a barbecue place.

“Ninety percent of people don’t even know my real name (full disclosure: It’s Jim Burgen),” he said with a chuckle. “Everybody just calls me Sparky.”