Playwright Sean Graney’s longish title, The Fourth Graders Present An Unnamed Love-Suicide, contains different messages and could easily be misinterpreted. The setting is in a brightly lit parochial school, where all the students wear gray sweaters, with the boys in ties and the girls in tartan skirts. In this Boot and Buskin Theatre Group production, running through Saturday, Feb. 22, at Le Moyne College, all the performers are college age, affecting to move and talk like 9-year-olds. At first it feels faux naïf, but is soon revealed to be something more sinister. Despite running less than an hour, this is not a show for kids.

As the action begins we get more mixed signals, although we cannot know if they come from Graney’s script or innovative director Matt Chiorini. A concerned parent (Christi Frateschi) steps forward from the front row in the non-proscenium Panasci Chapel to tell us what we are about to see. It invites us to think that the show is about reality, like an ABC After-School Special. All the while, a student (Joe Bates) has been standing alone on the stage, grimacing like a child forced to perform against his will. As others come aboard, he goes to stage left where he takes up a collection of instruments, some percussion and a recorder. His playing is not just the background but a punctuation of the action. Actors swing their feet to keep time with him. Although he never speaks a word, Bates is cited in the program as “The Chorus,” which we remember is also a convention in Japan’s kabuki theater.

We get into the meat of the conflict quickly. The presentation of the fourth graders mourns the loss of Johnny (Ryan Bannen), who recently shot himself. Before ending it all, he composed a play detailing the pain, misery and folly in those last hours. They are performing the show, playing themselves. Johnny was not always a victim, and he knew some moments of respite. He feels sweetly toward the excruciatingly shy Rachel (Jessie Gherardi), who suffers an eating disorder and feels rejected by other students because of her perceived weight problem. When she offers Johnny a box of fruit juice, he gracelessly complains that it’s too warm. Worse, he jumps to attention when offered a cold juice box by the flirtatious and popular Sally (Kelly Stier). Her equally high-status sidekick Brenda (Katie McAninch) recommends the importance of competition to determine who will be known as superior.

Sally’s motivations are anything but pure. Her feint at Johnny provokes her boyfriend Mike Rice (Nick Jarmak). In absolute candor (perhaps another kabuki device), Mike announces that he is a bully at his entrance and provides a mock explanation of his motivation from Psychology 101: “I do not like people. They hurt me.” He’s going to do the hurting here, however, and starts in on the innocent, deeply vulnerable Rachel by cutting off her pigtails, which she feels are her only assets.

Sally is not the only girl to smile at Johnny. The hall monitor in a safety patrol belt, Lucy Law (Kimberly Grader), comes on to him. But she’s ready to shed her impartiality (the “law”) to be accepted by the mean girls. 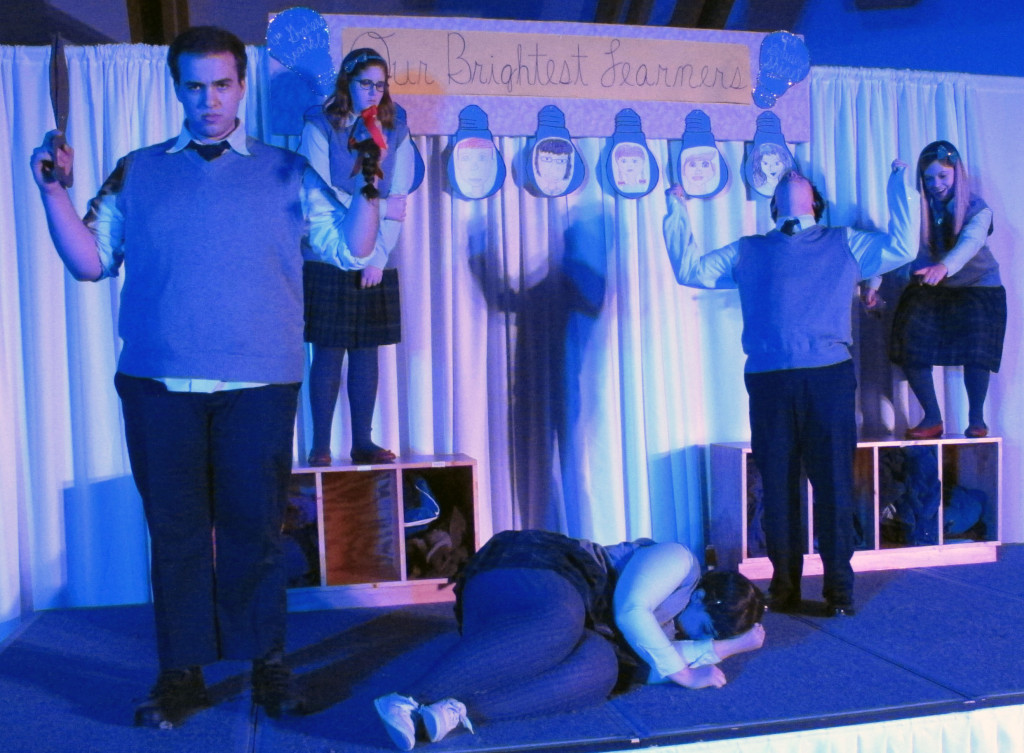 Increasingly, we become aware of Graney’s stylized language. Characters tend to avoid contractions, just as Damon Runyon’s gamblers do. There are also malapropisms that do not invite humor. Johnny says, “I do not deserve the yellow cake of your love for me.” When Fourth Graders premiered in 2003, Graney surely expected that audiences would remember “yellow cake” from George W. Bush’s infamous citation of the atomic weapons that were not there. There is much more: What is one to make of “What the frog?” or “These eyes are sore and you are a sight to be for them.”

The citation of the name “Sally” invites a comparison with Charles Schulz’s Peanuts characters, or perhaps Bert V. Royal’s spoof of Peanuts, Dog Sees God. Schulz’s lasting innovation was to put the anxieties of adults in the mouths of children. Thus, some wag said that Peanuts is the Waiting for Godot of comic strips.

Graney reverses that equation. The grief and despair his characters exhibit is that of real children: tender, weak and vulnerable, like the kids who kill themselves after storms of bullying. Fourth Graders is, instead, a Beckett play affecting to look like a comic strip, but in a kabuki package. Completing the kabuki motif on scenic designer Karel Blakeley’s harsh white set is a thrown bolt of scarlet cloth, the bloodbath.

Director Chiorini pulls strong performances from all players, never patronizing. The most impressive turns, as must be, are the victims played by Ryan Bannen and Jessie Gherardi, and Nick Jarmak as the victimizer.

Playwright Sean Graney, founder of the ill-named Hypocrites Theater Company, has been a legend on the Chicago scene. This is his first work to be seen in our part of the world.

Bond’s Market
Going Bananas in the Big Apple
To Top