Tracing the Syracuse ties of Solomon Northup, subject of the new movie drama 12 Years a Slave

If you could somehow speak to some Syracuse residents from the 1850s and told them that a movie had been made about Solomon Northup, they might wonder what a movie is. But they’d know who Northup was.

Solomon Northup, you see, spent some time in Syracuse. Northup’s name was a household word before the Civil War. Born a free man in Essex County, he was living in Saratoga Springs in 1841 when he met two men. They offered him work as a fiddler in a circus they were connected with if he would go with them to New York City. Northup needed money and agreed to go.

Eventually, though, he accompanied the men to Washington, D.C., where they sold him to a slave trader. He was transported to Louisiana, and for about the next 12 years, he lived the life of a slave, the property of several owners.

Finally, in 1852, Northup was able to get word to people in New York, and an acquaintance of his traveled to the South, found him and brought him home. His tale of kidnapping, suffering and rescue amazed newspaper readers, and Northup wrote a book called Twelve Years a Slave, which was well received and widely read.

Northup went on a lecture tour, educating the public about slavery and selling his book. An early appearance was at an event at the Syracuse City Hall in 1853 commemorating the anniversary of the famous Jerry Rescue.

Abolitionist Gerrit Smith, at the end of his remarks, “introduced to the audience Solomon Northup, the veritable Solomon who has lately been released from a twelve years’ sojourn in the hell of slavery.” The speaker who followed Northup was Frederick Douglass.

Northup was already a bit familiar with Syracuse. In his book he mentioned that, before his kidnapping, he had visited cities in New York including Rochester and Buffalo. He undoubtedly traveled to them via the Erie Canal–he wrote that he knew the villages along the canal–so must have at least passed through Syracuse and possibly lodged there.

Reporting on another lecture by Northup, also at the Syraucse City Hall, the next winter, the Syracuse Evening Chronicle noted that “he will recount in his own simple and unvarnished way, the particulars of his kidnapping and twelve years’ subsequent servitude in the South.” A writer at the Syracuse Daily Journal apparently knew Northup personally, saying “we happen to be somewhat acquainted with ‘Sol.’ He is a man–every inch of him.”

That spring, a play based on Northup’s book was presented at the National Theater in Syracuse. Northup spent several weeks in the city overseeing the production, in which he played himself. The drama’s opening was reported to have gone “tolerably well,” but there were some problems the first night. The play was too short, for one thing, and the playwright, a Mr. Kemble, stepped up and apologized to the audience for that. Members of the audience who had not read Northup’s book had trouble following the story. Finally “some of the characters were well performed, while others were poorly done,” according to the Syracuse Daily Standard.

The play was presented several times that spring, but it was ultimately a flop. Newspapers suggested that local abolitionists had not attended in force. The Evening Chronicle wrote: “Solomon is an excellent fellow. . .  We regret his adoption of this new line of business. . .  We hope Northup will not suffer pecuniarily by his operation.”

The play’s failure might have been a factor in the financial problems that Northup experienced around this time. Several court judgments sought payment for debts Northup owed, and the Rome Citizen complained about his overdue printing bill with them. But there may have been other causes of his indebtedness.

“We hear that he is generous and pitiful to his fugitive brethren; that he gives of his substance to those who have fled from slavery, saying: ‘I know what it is, I can feel for you,'” said the Evening Chronicle in late April 1854.

Given his experience with slavery, Northup might have devoted some of his resources to helping fugitive slaves make their way to Canada. It is known that he was involved with the Underground Railroad in the early 1860s in Vermont. He might also have participated in such activity in Syracuse, which at the time was extremely anti-slavery.

The play’s failure did not keep Northup from making another appearance at that fall’s Jerry Rescue celebration. “It was announced,” said the Evening Chronicle, “that the famous Solomon Northup was in town and would be present, at the afternoon session, upon the platform.”

Although newspaper reports of Syracuse appearances by Northup trail off after this, he probably continued to make visits to the area. His son, Alonzo, resided in Weedsport for many years, and Northup might have visited with his relatives.

Northup’s ultimate fate remains elusive. His memory endures, however, since many of Northup’s descendants still live in Central New York. 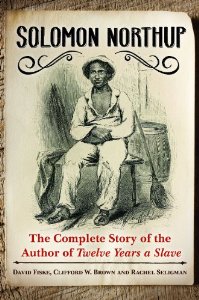 David Fiske is co-author of Solomon Northup: The Complete Story of the Author of Twelve Years a Slave (Praeger Publishing, 2013).