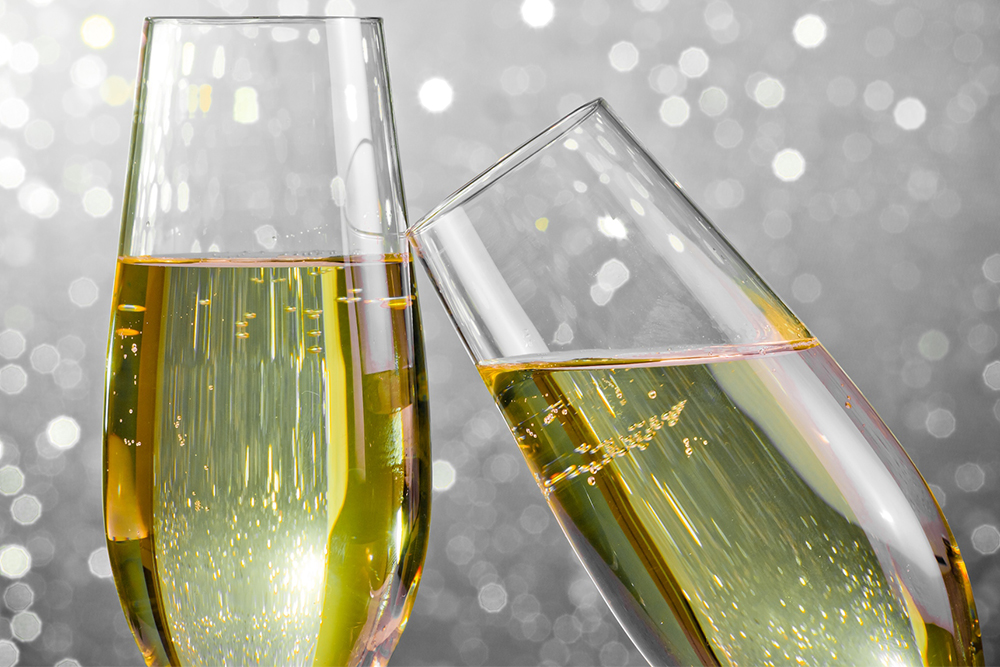 The Cayuga Lake Wine Trail is a refreshing option for all seasons.

Nothing says elegance like a slender flute of sparkling wine: crisp, dry and effervescent. Tiny bubbles add sparkle to the holidays and are traditional for New Year’s Eve toasts.

But why limit consumption of bubbles to New Year’s Eve and special occasions only? Cassandra Harrington, executive director of the Cayuga Lake Wine Trail, sees sparkling wine as a drink for all seasons and all reasons.

A glass of Goose Watch Winery’s semisweet Golden Spumante with a splash of Goose Watch Strawberry Splendor wine is perfect for poolside sipping, she says. The Spumante Blush from Swedish Hill Winery (sister winery of Goose Watch) is a pretty pink alternative, with a sweetness that warms you in hot tub season.

The Riesling Cuvee from Swedish Hill is a versatile sparkling wine that appeals to fans of both dry and sweeter wines. “It’s a real crowd-pleaser,’’ Harrington reports.

Hard to resist is Knapp Winery’s Brut, a sparkling wine made from a blend of grapes. The Cayuga Lake Wine Trail office is at Knapp, Harrington notes, and she could grab a bottle of the Brut every day, no problem.

Atwater produces several sparkling wines and was delighted to have its Cuvee Brut 2010 named one of the “Year’s Best U.S. Sparkling Wines’’ by Wine & Spirits magazine earlier this month. The Cuvee, a blend of 50 percent Chardonnay and 50 percent Riesling grapes, was made in the “methode champenoise’’ style (fermented in the bottle) and matured for three years before its release. It costs about $30. Atwater also offers two light, refreshing, Prosecco-style sparkling wines, Bubble Riesling and Bubble Pinot Noir Rose, both fermented off-site and lightly carbonated before bottling. These bubblies are less complex in flavor and less labor-intensive than bottle-fermented sparkling wines and cost about $16 per bottle. They are best consumed immediately (not aged).

Sparkling wines have a long and storied history in the Finger Lakes region. The Pleasant Valley Wine Company near Hammondsport, perhaps better known as the Great Western Winery, is the oldest winery in the region and has been making “American Champagne’’ since the 1860s. Today, Great Western Winery is the largest producer of bottle-fermented sparkling wines in the eastern United States.

Not far from the Pleasant Valley/Great Western complex, on the west side of Keuka Lake, is Chateau Frank, sister winery of Dr. Konstantin Frank Vinifera Wine Cellars. Chateau Frank is the only Finger Lakes winery to produce sparkling wine exclusively, according to Jim Trezise, president of the New York Wine & Grape Foundation. Of the 130 wineries in the Finger Lakes today, around 15 produce sparkling wines, Trezise said.

Chateau Frank’s sparkling wines are noted for being made in the methode champenoise style. “Virtually all of their wines are dry, and very elegant,’’ Trezise said. He’s especially fond of the Blanc de Noirs, an award-winning sparkling wine made from Pinot Noir grapes.

Other bubbles worth noting include: Toro Run Winery, Ovid, has introduced a Brut sparkling wine, according to Harrington. The winery is closed between now and February, with the exception of wine trail events. Call 530-2663 for details.