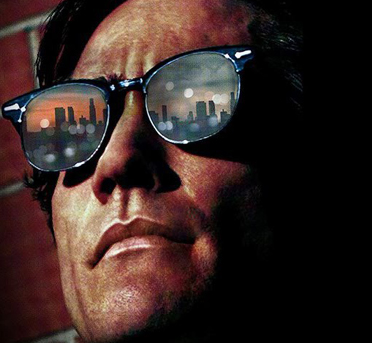 Nightcrawler is what they call the camera-haulers who dash around Los Angeles when the sun’s down, listening to the scanner for police feeds.

The goal: Arrive in time to capture the best video to sell to image-hungry competing early morning news shows.

Louis Bloom stumbles upon this dark world literally by accident one night, a loser driving his so-so car along the roads of his city when he encounters a scene where unfortunates came to bad things. He talks to the guy who took the footage, soaks it all in, and his eyes and ears are opened to some possibilities.

In this intriguing mix of crime-thriller and drama titled, quite appropriately, Nightcrawler, we already know that Bloom is pretty much a creep. At the start, though, he’s the run-of-the-mill kind, scruffing through back lots to “acquire scrap wire” to sell to a salvage yard. We did see him mug the security guard who stopped to question him to steal the expensive-looking watch that caught his eye. And then he tried to convince the salvage owner to give him a job because times were hard. The owner’s having no part of it. Why, Bloom asks, as much with his odd eyes as with as his weird voice. “Because I won’t hire a thief,” the wise owner says.

And so writer and director Dan Gilroy has foreshadowed exactly what lies in the heart of Louis Bloom.

Jake Gyllenhaal takes that essence and allows it to fester into something big and meaty and to be reckoned with by Joe Loder, a competing Nightcrawler played by Bill Paxton, with long hair in a short but important part; Nina Romina, a veteran news director that benefits from his better video played by Rene Russo, with short patience in an even more important part; and Rick, a desperate employee who has to listen to his barked orders played by Riz Ahmed, with talent long past what you’d expect for a guy you’d never seen before in a part you’d never expect would end up being this interesting.

The story is compelling, but hard to swallow. Bloom is one of these self-taught odd guys who’s no good socially but somehow can maneuver people and situations to go the way he wants once momentum starts swinging in his direction.

And once he discovers that he can manipulate the scenes that he’s turning over to Nina and not only get away with it, but talk his way up the ladder in his mind and reality, the world from midnight until the 6 a.m. news begins to really start spinning in his direction.

As I sat in the third-full Sunday mid-afternoon matinee crowd, I began hoping more and more that stuff like this does not happen in LA or New York or Chicago as they battle for the video that will give them the edge in the ratings. Freelance shooters and production crews would never … news directors would never … the police would never …

Would they? Would they crawl to this level in the middle of the night?

This one pivotal newscast, Nina is barking orders from the control room, the anchors are amping drama around Louis Bloom’s video, it sure looks like an award-winning broadcast …