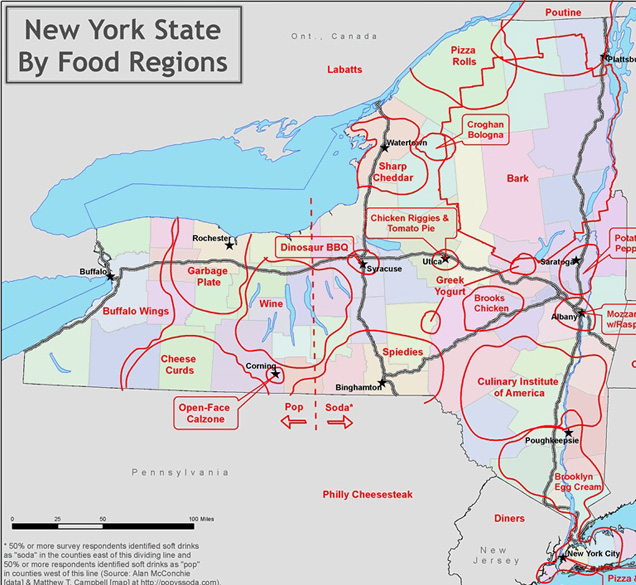 What’s the first map you look at when you’re hitting the road in New York? AAA? Rand-McNally? MapQuest? Google?

If you like food – and like to eat like a local when you travel – you should check out the New York State Food Map, created by Shannon Glazer. Glazer created her map of the state’s food regions in 2012 and created a home for it on Facebook, where it has been shared thousands of times.

“Inspired by my visits to all corners of New York State, I decided to map different food regions in the state,’’ Glazer says on the map’s Facebook page. “After the first version of my map spread like wildfire, I decided to edit the map based on some of the comments I received.’’

The map includes New York’s soda vs. pop divide (east of Rochester, in the Finger Lakes) and has been updated to include grape pie (Finger Lakes), Grandma Brown’s Baked Beans (the pride of Mexico, Oswego County) and Turkey Joints (a seasonal candy created at Nora’s Candy Shop, in Rome).

For Syracuse, it notes salt potatoes and Dinosaur Bar-B-Q. Some have suggested it also should include Hofmann hot dogs and coneys – and that Buffalo should include sponge candy along with chicken wings and beef on weck.

“(President) Obama ate a spiedie today while in Binghamton to give a speech,’’ Glazer noted Aug. 23 in a post on Facebook. “He also mentioned spiedies in the speech- apparently they came highly recommended. An exciting moment for regional NYS food!’’

Spiedies, for those unfamiliar, is a local specialty of marinated, grilled meat  served with Italian bread or a sub roll to wrap around it.

You can check the map and leave comments here.

Margaret McCormick is a freelance writer and editor in Syracuse. She blogs about food at eatfirst.typepad.com. Follow her on Twitter at @mmccormickcny