As a director Dan Rowlands made his reputation by taking well-worn properties, like Arsenic and Old Lace, and treating them as if they had just been discovered. So it is with Romeo and Juliet, now at the Central New York Playhouse in Shoppingtown.

Because of near-universal assignment in high school literature classes, it’s the one Shakespeare that almost every citizen already knows and can quote handily. Rowlands’ Romeo and Juliet shakes off any allusion to the dozen or so movie adaptations now streaming online and asks that audiences look at each character and each scene anew. Although he borrows some cast members from Stephen Svoboda’s Breakfast Club-themed Hamlet, performed March 2014 at the Redhouse Arts Center, Rowlands’ Romeo and Juliet is reimagined from the ground up.

Action takes place somewhere in 20th-century America, but we need a while to figure out where and when this might be. Shakespeare was famously careless about geography and probably couldn’t find Verona on the map; this gives Rowlands license. The decaying classical columns in Navroz Dabu’s set design imply a Mediterranean country, but they might also be found on plantations in one of the former states of the slave-holding Confederacy.

The cast is multiracial, with the Montagues (Ramel Reed and Vanessa Campbell) African-American and the Capulets (William Edward White and Jennifer Byrne) white. But, whoa, this does not mean the families are tribal, like the Sharks vs. the Jets.

True, we sense the violated taboo when dusky Romeo (Maxwel Anderson) locks eyes with the ivory-skinned Juliet (Marguerite) at the masked ball. This is the South, apparently in the 1950s. Juliet has pin-ups of Ricky Nelson and Audrey Hepburn in her boudoir, and we hear period music like “Bad Moon Rising.” Juliet’s orotund pappy sports a wide-brimmed straw hat and sounds a lot like Big Daddy in Cat on a Tin Roof. Nonetheless, Romeo’s sidekick, the mischief-making Mercutio (Dan Rowlands), is a white dude. 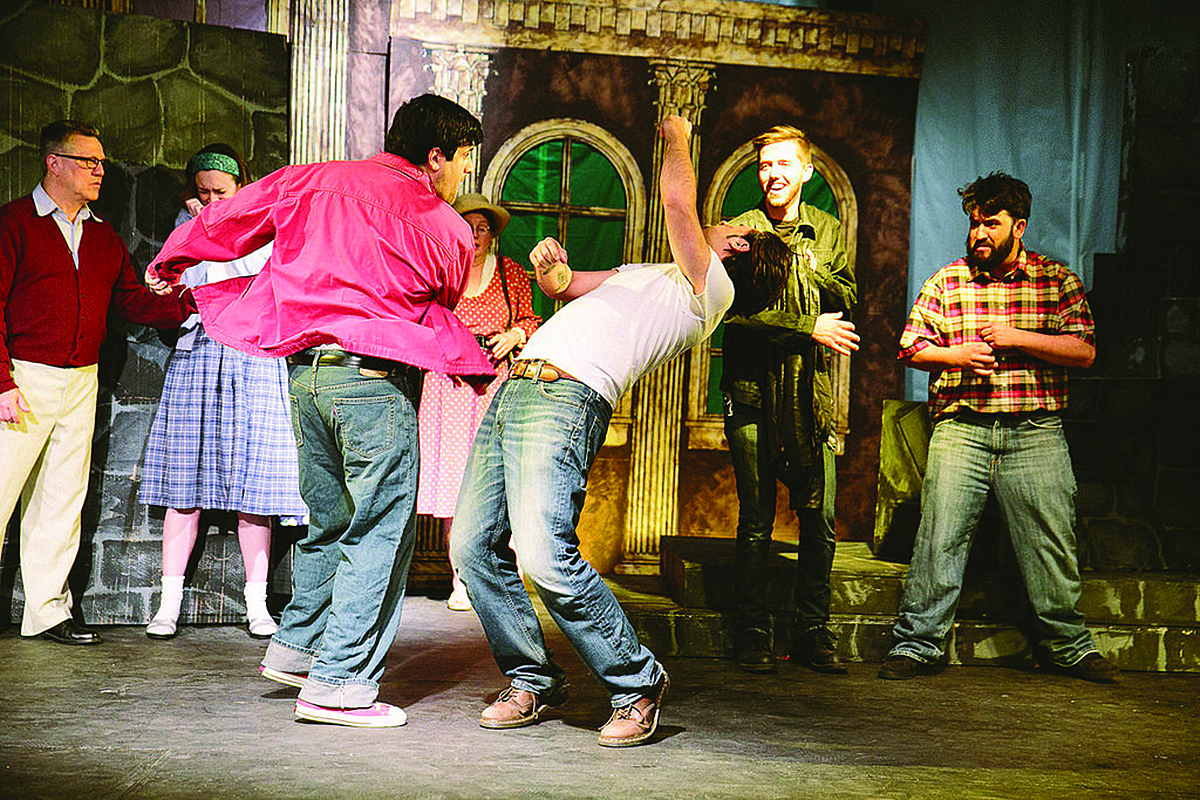 Neither is this colorblind casting. The wise Nurse (excellent Tamar Smithers) in the Capulet household speaks in the cadences of an August Wilson character. The Roman collar-wearing Friar Laurence (James Sanders), more ecclesiastical and spiritual than in many productions, has a depth and dignity white audiences began to attribute to blacks about the time audiences fell in love with Morgan Freeman. In a vote of approval, director Rowlands assigns to the friar more lines than he is given in printed texts.

Rowlands appears to have cast the people he really wanted in the leads. Both Mitchel and Anderson are attractive, articulate young people; they do not, however, always look like lovers. Were these two really stuck by lightning that night? In the post-Steinem age we are often uneasy with giddy, naïve Juliets and perhaps that is why Mitchel’s interpretation is forthright and self-possessed. If she is ready to feign death for love, it’s a deliberate decision, not a reckless one.

Anderson’s Romeo is first defined on the street, where he seems dreamy and peaceable rather than a toughie like his comrades. His killing of Tybalt comes across as a dreadful accident rather than a crime of passion. We know he is love-struck in the last two-thirds of the action, but did that really all derive from these ballroom and balcony scenes?

By having costumer Barb Toman put so many characters in jeans, Rowlands prepares us for the untoward on the streets of this Verona. The fight scenes choreographed by Derek Potoki (who also takes the thankless role of Paris) mark the peak moments in three hours of action. To set the right tone, Rowlands delivers the frequently lewd and provocative Mercutio himself. Entering for the Capulet team is black-leather clad Jordan Glaski as Tybalt. Glaski’s menace was so ferocious as to intimidate playgoers in the first row. It’s a test of Romeo’s manliness to be able to stand up to him.

Jennifer Byrne’s Lady Capulet is a compassionate mother whose assertive empathy becomes palpable. And Robert Edwards’ Benvolio is a cool head who understands Romeo perhaps better than he understands himself.

Director Dan Rowlands succeeds in getting us to rethink well-known lines and characters.

Central New York Playhouse’s Romeo and Juliet concludes with 8 p.m. performances on Thursday, May 21, through Saturday, May 23, at the company’s Shoppingtown Mall venue, 3649 Erie Blvd. E. For details, dial 885-8960.