Rome’s Capitol Theatre, 220 W. Dominick St., is still in expansion mode, with its recent addition of a boutique art-house venue with digital projection capabilities down the block, and more plans for a second art house, a café and a black-box theater space. But this weekend the theater returns to yesteryear for Capitolfest, the annual summertime salute to screen rarities from the silent and early sound eras.

The 13th edition offers 17 movies and plenty of short subjects, all presented in 35mm prints. A quintet of features will form a tribute to forgotten film star Nancy Carroll, an Academy Award nominee who was big-time box office in the early 1930s.

If you don’t know about Carroll’s resume, it explains why devoted film fans from around the country make a beeline to Rome every summer. Aside from the Empire State, Capitol executive director Art Pierce says that this year’s festival attendees hail from 24 states (Wyoming and Tennessee are 2015 newbies) plus various Canadian provinces, with attendance up 25 percent from last year.

New this year will be a dealers’ room, located at an adjacent storefront, that will feature collectible items, stills, videos and other bric-a-brac. Dealers who once held court at the now-deceased Syracuse Cinefest will sell their wares at Capitolfest, including the Berry Hill Bookshop, author Martin Grams and memorabilia specialist Mike Pipher.

Capitolfest 13’s three-day, seven-program festival begins with roughly nine hours of flicks on Friday, Aug. 7. The first session, 11:30 a.m. to 4:45 p.m., kicks off with the 1926 silent comedy short Bobby’s Day Out, with long-forgotten movie comedian Bobby Ray, who at one career point was teamed in shorts with Oliver Hardy. Next comes the 1926 “race movie” silent The Flying Ace (11:50 a.m.), with Lawrence Criner as an ex-World War I aviator hero who does some snooping as a railroad detective. Shot on a low budget in Jacksonville, Fla., and with opening credits that promise “entire cast composed of colored artists,” writer, producer and director Richard E. Norman’s Ace is a pioneering effort designed for segregated bijoux. Both silents will feature organ accompaniment by Dr. Philip C. Carli. 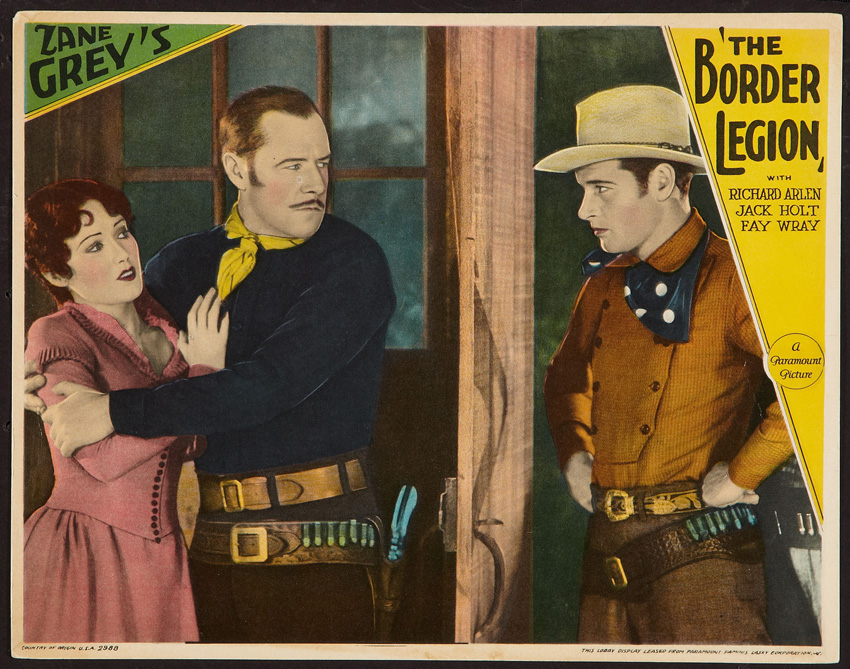 Based on a Zane Grey novel, the 1930 Paramount horse opera The Border Legion (1:10 p.m.) offers a film fanatic’s dream cast, including Fay Wray, Richard Arlen, Eugene Palette and Jack Holt. This talkie also relies on stock footage culled from the 1924 silent version. Carli returns to the Capitol organ for The Air Mail (2:20 p.m,), a 1925 Paramount action silent with Warner Baxter and Douglas Fairbanks Jr. (then only age 15, he would marry Joan Crawford four years later), plus scenes shot in Death Valley. Alas, the film is available only in an abridged version of four surviving reels (out of the original eight) preserved by the Library of Congress.

A 1929 edition of MGM’s Hearst-Metrotone News (3:20 p.m.) offers historical footage of President Herbert Hoover as he congratulates Richard E. Byrd’s exploration of the South Pole. The afternoon winds down with the 1929 satire The Talk of Hollywood (3:30 p.m.), with Nat Carr as a silent-movie producer who experiences disaster when he switches to talkies, which means with new problems such as sound equipment and a drunken projectionist. Carr’s Yiddish shtick paves the way for politically incorrect one-liners in this early directorial effort from Mark Sandrich, who went on to helm Bing Crosby’s Blue Skies and Holiday Inn.

Friday’s evening program, 6:30 to 11 p.m., features Bernie Anderson on the keyboards for two silents, starting with the 1925 “Out of the Inkwell” cartoon short Koko Nuts, the Fleischer brothers’ gag-driven farce starring Koko the Clown. Paramount’s 1928 romantic drama The Shopworn Angel (6:40 p.m.) presents the first Capitolfest appearance of Nancy Carroll, who plays a showgirl who falls for a World War I doughboy (rising star Gary Cooper). Following on the mega-success of The Jazz Singer, Shopworn Angel was filmed as a partial talkie as well as a silent. The Library of Congress only has a surviving silent version with its last reel missing, so quality control officer James Cozart has created a special video wrap-up that brings closure to the final scenes. Angel was remade by MGM in 1938 as a box-office vehicle for James Stewart and Margaret Sullavan. 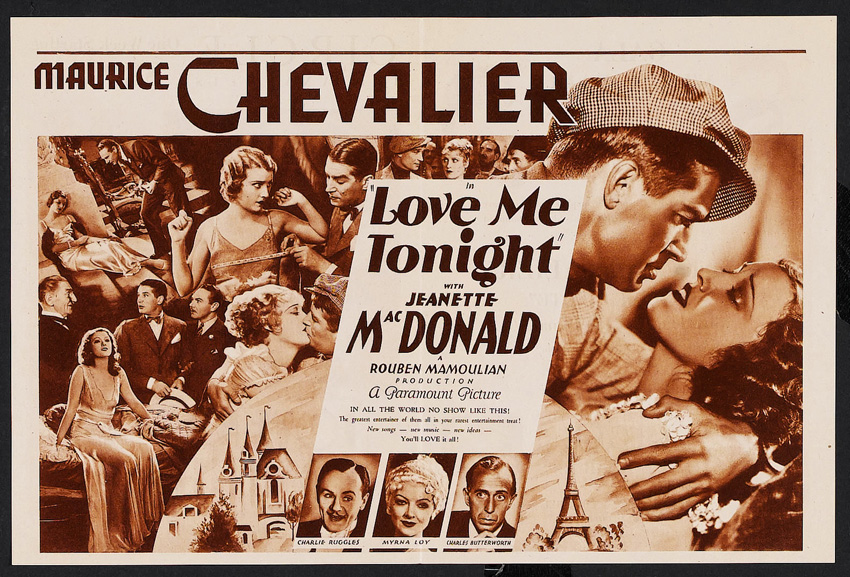 The evening concludes with Capitolfest’s traditional screening of a film that is popular among cinema fans and easily available to see on movie channels and home video, although 35mm archival showings are extremely rare around Central New York. Love Me Tonight (9:35 p.m.), director Rouben Mamoulian’s innovative 1932 romantic comedy classic for Paramount, offers infectious swooning between Maurice Chevalier and Jeanette MacDonald, plus a Rodgers and Hart score that includes Chevalier’s signature songs “Mimi” and “Isn’t It Romantic?” The movie was so racy in its original pre-Code incarnation that nearly 15 minutes were shorn for a 1949 reissue; while those trimmed scenes have been lost, Love Me Tonight still rates as a must-see.

Starting the morning lineup on Saturday, Aug. 8, 9:30 a.m. to 12:35 p.m., will be The Way of All Pests, a 1940 Color Rhapsody cartoon from Columbia with voices supplied by the always-in-demand Mel Blanc. Next is Paramount’s 1930 drama The Devil’s Holiday (9:40 a.m.), with an atypically cast Nancy Carroll in her Academy Award-nominated turn as a gold-digging manicurist who falls for a wealthy suitor (Phillips Holmes) from a family of wheat farmers. Also on the fringes are second banana Ned Sparks, singer Morton Downey and Capitolfest fave ZaSu Pitts.

Live action mixes with animation for the 1915 silent short Cartoons on the Beach (11:20 a.m.). Capping the morning session is the 1920 Paramount espionage flick Crooked Streets (11:30 a.m.), one of the few surviving starring vehicles of actress Ethel Clayton, who wound up playing dozens of uncredited bit parts through 1947. Bernie Anderson takes over the keyboard for these silents.

Saturday’s afternoon session, 1:45 to 6:40 p.m., begins with Universal’s 1929 early soundie Skinner Steps Out, with Lonesome star Glenn Tryon in a likable farce. The movie is followed by a 3:10 p.m. presentation with David Pierce and James Layton, authors of The Dawn of Technicolor, featuring clips and photographs to illustrate the film process and its growing pains during the silent era.

The evening’s program, 8:25 to 11:45 p.m., commences with Avery Tunningley handling the organ honors for two silent entries. The 1927 comedy short Dumb-Belles offers eye candy from the Sunkist Bathing Beauties. Then Dolores del Rio and Warner Baxter co-star in the 1928 United Artists melodrama Ramona (8:45 p.m.), which will be preceded by a 20-minute introduction and lecture by Library of Congress nitrate film specialist George Willeman regarding the film’s careful restoration.

The cartoons continue at Capitolfest with Cinderella Goes to a Party (10:45 p.m.), a manic Columbia short subject from producer Frank Tashlin. The evening ends with Paramount’s 1933 thriller Silence (10:55 p.m.), a pre-Code prison drama told in flashback, as a death-sentenced convict (Clive Brook) still maintains his innocence. 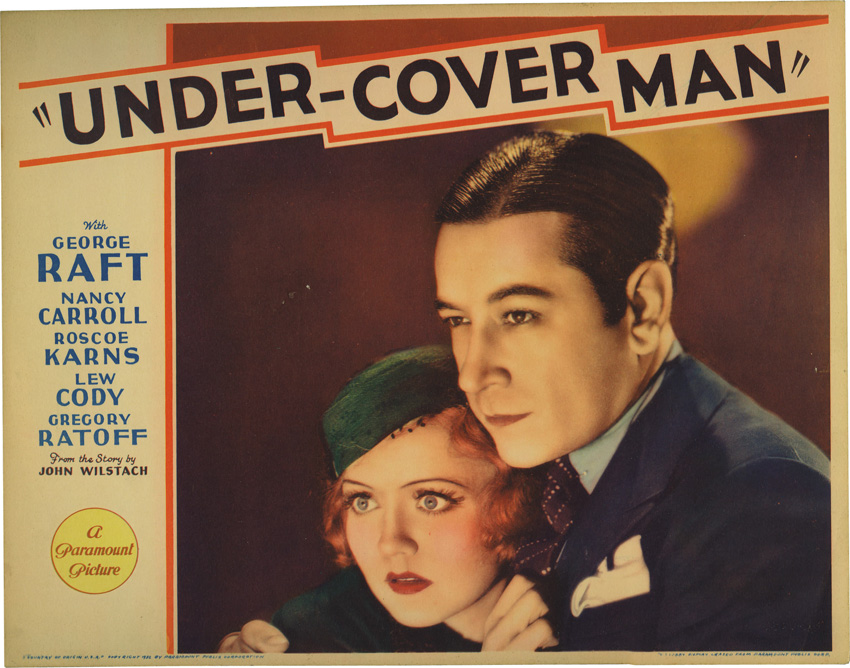 The final Sunday program, running 1:35 to 6 p.m., kicks off with Mr. Bride, a 1932 MGM-Hal Roach short subject starring Capitolfest veteran Charley Chase as an employee who unwisely agrees to a female-impersonation charade arranged by his boss, with gay subtext in abundance. Nancy Carroll’s final Capitolfest flick is Paramount’s 1932 crime drama Under-Cover Man (1:50 p.m.), with George Raft in one of his earliest starring roles.

At 3 p.m. eminent film historian Jack Theakston presents his annual esoteric grab bag of clips, trailers and more for a mostly Technicolor show. Two silents round out the afternoon, with Dr. Philip C. Carli returning to the keyboards. Oh, Mary, Be Careful! (4:05 p.m.) is a forgotten five-reeler farce with Madge Kennedy; shot in 1917, it was not released until 1921. And The Dixie Flyer (4:55 p.m.) is a low-budget, high-energy railroad adventure yarn with star Eva Novak handling her share of dangerous cinematic stunts.

Capitolfest 13’s three-day weekend pass fetches $60 for adults, $38 for children 12 and under, while a Saturday-Sunday pass is $50 for elders, $26 for small fry. Single-day passes run $30 adults, $18 kids, while separate sessions are $16 adults, $7 children. The mint-condition prints hail from the Library of Congress, the UCLA Film and Television Archive, George Eastman House and the vaults of Universal Pictures. For information, call 337-6453 or visit romecapitol.com.