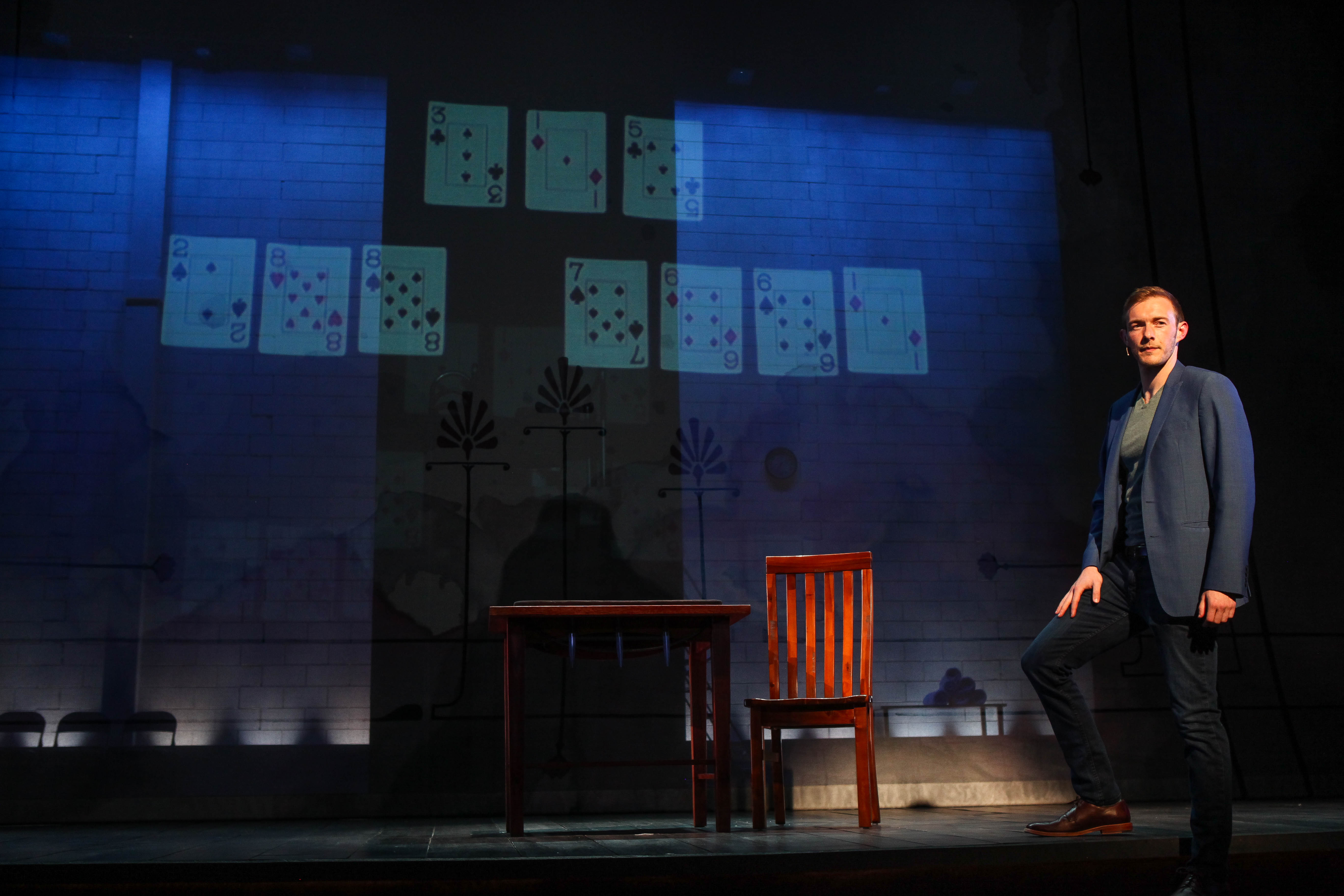 Actor Brett Schneider likes to quote the 19th-century maestro Jean Eugene Robert-Houdin as saying, “A magician is an actor playing a magician.” Sorry, kids, this means that what we call “magic” is created out of talent, discipline and hard work, especially rehearsal. Robert-Houdin (whose name inspired Erich Weiss to change his to Houdini in tribute) is also saying that a magician is not a shaman or priest. Instead, like any actor, such as Robert De Niro in Raging Bull or Meryl Streep in Sophie’s Choice, the performer employs some elements of self.

Schneider is the 32-year-old lead in Andrew Hinderaker’s The Magic Show, Syracuse Stage’s season finale running through May 13. Hinderaker tailored the role of the Magician (no other name) in The Magic Play for Schneider and his breath-stopping tricks in a handful of productions around the country, most notably at Chicago’s Goodman Theatre in October 2016. Although there is no suggestion that the role is biographical, no one else has ever played it.

Most of the Goodman team, including director Halena Kays, has traveled to Syracuse for this opening. Kays favors pregnant pauses, suggesting a sustained experience with the works of Harold Pinter.

Imported also is the production team of scenic designer Lizzie Bracken, lighting designer Jesse Belsky, media designer Philip Allgeier and magic consultant Jim Steinmeyer. They ensure that there is a comparable magic in the presentation.

When the Magician performs the famous Biddle Card Trick, we see the cards brightly projected on a screen above. Because a translucent scrim has been interposed, the screen appears to be floating in air, like, um, legerdemain. Soon other images also appear on the screen, such as the towering Diver (Sean Parris) with Olympic-toned muscles, preening on a high board.

Even though the first 25 minutes include interaction with a person plucked from the audience, all is perfection, with one gasp-worthy moment following after another. The rest of the production, alas, does not live up to this gleaming promise.

Because of the required participation, not every audience is going to see an identical show. The program asserts, “No actors or stooges are used as volunteers.” Instead of calling for hands, the Magician goes up the aisle and points to the person he wants. (The night the Syracuse New Times attended, one of the pluckees was a personal friend, so we can testify, “No collusion.”) Generally the overweening confidence of the Magician can control anyone pulled up onto the stage and likely to be trembling. The unknown is always a risk, however.

What we have not expected is the dialogue between the Magician and the Diver, with heated attacks on one another, laced with F-bombs. They have been lovers, and things are breaking apart. To a degree, Schneider’s quoting of Robert-Houdin has anticipated this because the Magician is a polished performer with a messy offstage life. The conflict is also an upending of the Magician’s controlling personality, on top of every trick and manipulating the volunteers like marionettes. Instead, we now see the Magician as dogged by insecurity and fear. 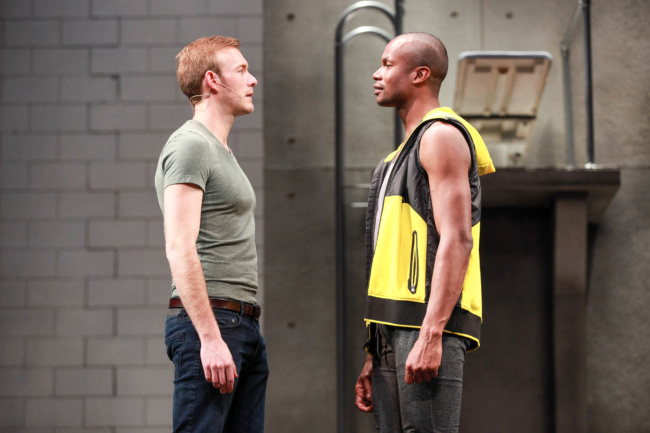 The Magician (left) and the Diver (right) had several tense moments together that read more awkward than relatable. (Michael Davis/Syracuse New Times)

What makes this underwhelming dramatically is that the squabble and breakup appear untethered to what had gone on in the splendid first 25 minutes. Whose side are we on? The breakup is no more involving than one you stumbled upon in the wrong aisle of a supermarket when you were really only looking for Progresso soup.

The second act brings a change of scenery, far downmarket from what we saw in Act I. In a tawdry Reno bar, an older, portly man named, inventively, Another Magician (Jack Bronis), is plying his trade. He uses oversize cards in what looks like a variation of three-card monte.

No one has to explain to us how second-rate this is because the goal of three-card monte is to cheat the rubes. The Magician has had higher aspirations, however. A program note supplies a useful quote from Teller of Penn & Teller, who ranks performed magic ahead of the romantic novel, horror movie, or symphony: “Magic goes straight to the brain; its essence is intellectual.” There is no indication that playwright Hinderaker knew of this line but he can embrace it now.

Like other practitioners, Another Magician calls for volunteers from the audience, and up pops the Magician from the first act. In short order we learn things about both men, which generates little tension. We also learn that the Magician suffered a psychological wound in childhood, de rigueur for uncountable numbers of artists.

The Magic Play ends with more extended audience participation. This time the volunteer not only comes on stage but stays there for a conversation. He or she is invited to propose a magic trick for the Magician to perform.

Here’s the most dangerous risk of the show. Projected phrases on the scrim suggest some of the pious but predictable options, such as “Find a cure for cancer” and “Build world peace.” But neither we nor the Magician knows what’s coming. Brett Schneider has wowed us with what he can do after rehearsal. Now he must improvise on the spot. How well he can do this will color how audiences view the entire play.