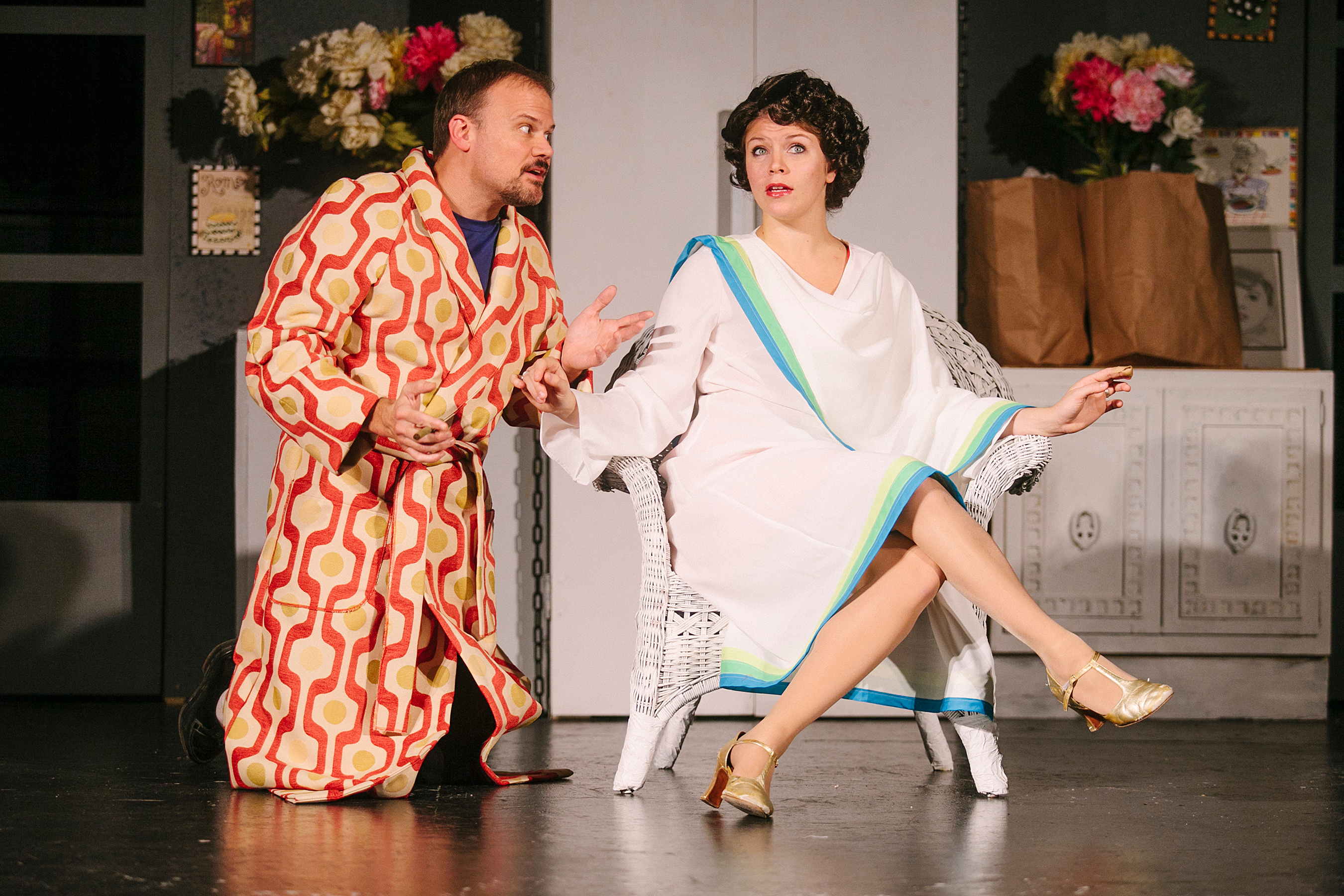 Recovering lost glamour is a big part of The Drowsy Chaperone, from TheaterFirst Productions at the New York State Fairgrounds’ Empire Theater. According to the premise, a solitary, fey collector of scratchy vinyl LPs, the Man in the Chair wants to relive the long-gone excitement of the glory days of Tin Pan Alley, like the year 1926. He wears an ill-fitting, moth-eaten sweater and lives in a nondescript apartment. By plopping the LPs on his Garrard turntable and sharing his feelings about what we are hearing, he fills the room with silk, chiffon, bangles, beads, formally cut morning coats and period swimwear.

Assuring that all those costumes are brand-new and fit perfectly is executive producer Eugene N. Taddeo. A much-lauded and admired costumer over the decades, Taddeo got into the producing business only last year when his TheaterFirst company revived Jerry Herman’s La Cage aux Folles, which was well-received at the box office and the Syracuse New Times Syracuse Area Live Theater (SALT) Awards. The book (by Bob Martin and Don McKellar) and the music and lyrics (by Lisa Lambert and Greg Morrison) present different challenges: It’s a loving spoof filled with familiar-sounding songs that most people have never heard.

Among the standouts of the more than 120 costumes are the silver lame aviatrix outfit worn by Trix (Jessica Skipper), a nod to Katharine Hepburn in Christopher Strong (1933), and the five lush outfits for the Oriental Palace scene. Leading lady Ceara Windhausen has more costumes than scenes. In the first act she wears three at one time, like a marioshka doll. She sheds the first one modestly while standing behind a large beach umbrella and gets rid of the second in a daring striptease during a cartwheel.

From the outside Chaperone may sound like an update of The Boy Friend, Dames at Sea or Thoroughly Modern Millie, only cleverer. The show started as a series of skits for the actual wedding, in Toronto, of Bob Martin and Janet Van de Graff. Martin co-wrote this book, and his name survives as groom Robert Martin (Donnie Williams) and de Graff (Windhausen) still appears as the bride.

They’re great roles. Big-voiced, athletic Windhausen has been attracting attention for some time, mostly recently in Rarely Done’s Grey Gardens last March. She once appeared as a featured soloist with the Chicago Symphony, and the wit and energy of her Janet make Chaperone her most impressive appearance locally.

Drowsy Chaperone ‘s seemingly bland title slyly reveals the dimensions of the Man in the Chair’s beloved vehicle. The center of the action will be a society wedding, because that’s where you once had chaperones. The dotty, upper-class hostess, Mrs. Tottendale (Kate Huddleston), barely knows what’s going on.

She is paired not with her husband but with a bald, dry-witted, scene-stealing butler named Underling (Jason Timothy). “Drowsy” means that the Chaperone (played by Kathy Burke Egloff) will be inattentive, but when she shows up, glass in hand, we sense that “drowsy” is a euphemism for tipsy. It’s the time of Prohibition, so she has to drink up while she can before the booze disappears.

Other characters will be familiar to anyone who’s ever seen musicals by Vincent Youmans, DeSylva, Brown & Henderson or even early Cole Porter: stock figures who barely complicate the plot. Terrible-tempered theatrical producer Feldzeig (John Melvin), accompanied by his not-dim floozy Kitty (Rita Worlock), want to stop the wedding to keep Janet on the stage.

In stealthy mischief, Feldzeig sends a secret weapon—the lothario of indeterminate ethnicity and accent, Adolpho (Jimmy Curtin)—to seduce Janet but instead sets his oily hands on the Chaperone, to sustained comic effect. The Man in the Chair tells us that the actor playing Adolpho on the cast album is incompetent, and so every one of Curtin’s gleeful excesses hits the mark.

For Egloff, her Chaperone is a breakthrough. Hers has been one of the most widely seen faces in community theater, always on top of her material. Here she sings, dances, and tells funny stories. Under Tursi’s guidance she delivers a unique style, with touches of Thelma Ritter and Elaine Stritch. She’s never been better.

An even greater success is David Minikheim’s Man in the Chair, a character who combines mordant wit with sweaty anxiety. From the stage he reaches out and grabs us by the lapels and demands that we pay attention and enjoy. Elton John and musicals about crashing helicopters may have won the day, but he’s not letting go. o

This production runs through Oct. 20.