Micere Mugo’s many friends and colleagues gathered at Syracuse University on April 2 and 3 to paint a picture of a career and a life that has caused ripples to roll across generations and institutions and disciplines. She was honored as a playwright, literary critic, and a social and political activist who challenged colonial and neocolonial rule in Africa as bravely as she challenged racism here in Syracuse and around the United States. And she was saluted as a kind friend, an auntie and a tireless mother for the many younger women she brought under her wing.

For 22 years Mugo has served on the faculty of the African American Studies Department at SU. It is not enough to call her work interdisciplinary. In her writing and scholarship she shreds the lines between disciplines, nor is she bound by any line between academia and activism. She has been an adviser, a mentor, an activist, a role model, and, beginning as a young woman in East Africa, a pioneer in national liberation struggles and campaigner for human rights.

She has built a reputation based on hard work and relationships with students, colleagues and friends who were once strangers. When you meet her it is hard not to feel that you are in the presence of royalty, if royal status were not hereditary but instead earned by selfless service. “Can you imagine?” she would say.

Late last year word started to filter out from the SU Hill that Mugo would be retiring at the end of the spring semester, pushed by nagging health issues and pulled by a desire to spend more of her time in her native Kenya. Supporters across campus mobilized to prepare a proper tribute.

Then word spread to other campuses, here in the United States, then in Europe and the United Kingdom, and back home to Africa. By the time the event kicked off on April 2, 30 different university and community institutions and organizations were lined up to sponsor, dozens of academics competed for a chance to speak, artists and writers clamored to perform in her honor. 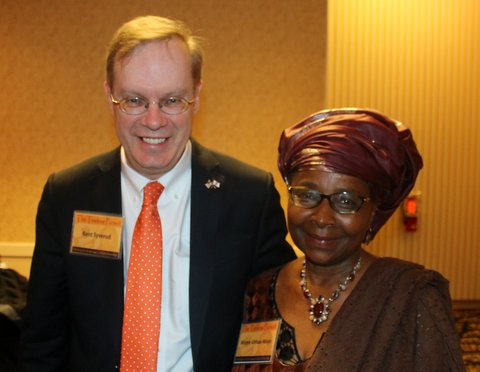 Mugo’s celebration brought back former chancellor and good friend Nancy Cantor to the SU Hill for what may have been her first appearance since she left town a year ago. The tribute included music from the James Gordon Williams Trio (which includes bass player Bill Horrace, whose day job is chair of the Economics Department at SU), dance from several student and community groups, and readings from poets from Syracuse and around the world.

You would never think when listening to her gentle voice that the slight woman (as one participant put it, “rocking the African headdress”) had lived through exile, incarceration and threats in Kenya and abroad as a result of speaking against the dictatorship that ruled her country after independence. One play she wrote along with her Kenyan colleague Ngugi wa Thiong’o, entitled The Trial of Dedan Kimathi, a Mau Mau independence fighter, is considered a classic of political drama 40 years after it was first produced.

Mugo was lauded as a teacher and a mentor, a poet and a playwright, but also as an “auntie” to so many women, and a surrogate mom to many more. She was remembered as one who could gently prod her colleagues or her students to take risks and work harder.

The symposium in her honor was entitled “Tireless Pursuit” and the theme of Mugo’s seemingly boundless energy was raised again and again. She helped found the local organization United Women of Africa, the Ghana Society of Central New York, and the Pan African Community of Central New York.

Dean Diane Lyden Murphy said that Micere Mugo possesses “a moral compass for knowing the right thing to do and a talent for inspiring others to follow — gently.” Willy Munyoki Mutunga, who serves as the chief justice of Kenya’s Supreme Court, made the journey from Nairobi to Syracuse to discuss the topic, “Micere as the Mother of Feminist Masculinity.” He recounted a time in the 1970s when Mugo, then the mother of two small girls, was appointed the first female dean of a college at the University of Nairobi. In a meeting with her colleagues, he recalled, she began by mentioning that she had a question for her male counterparts: “Do you cook? Do you do your laundry? Do you change the nappies on your children?” She made her point.

Poetic License to Kill
Take the New Times Survey and WIN!
To Top