You might have tasted it in Skaneateles, where Thomas “Tom” Armstrong created it and finessed it, or at Nelson Farms in Nelson, the business incubator and commercial kitchen where he produced it, until recently. You might have even tasted it out of the back of Armstrong’s car, because he’s been making the sauce and mostly marketing it on his own since 1995.

Barbecue season is in full swing, and Armstrong and his sauce have a new “stage.” On Wednesdays from 11 a.m. to 9 p.m., Armstrong is offering a special barbecue menu at the Old Erie Restaurant in Weedsport, where he works as a chef. Walk-ins are welcome, but reservations are suggested, so they know how much meat to be cooking “low and slow.” 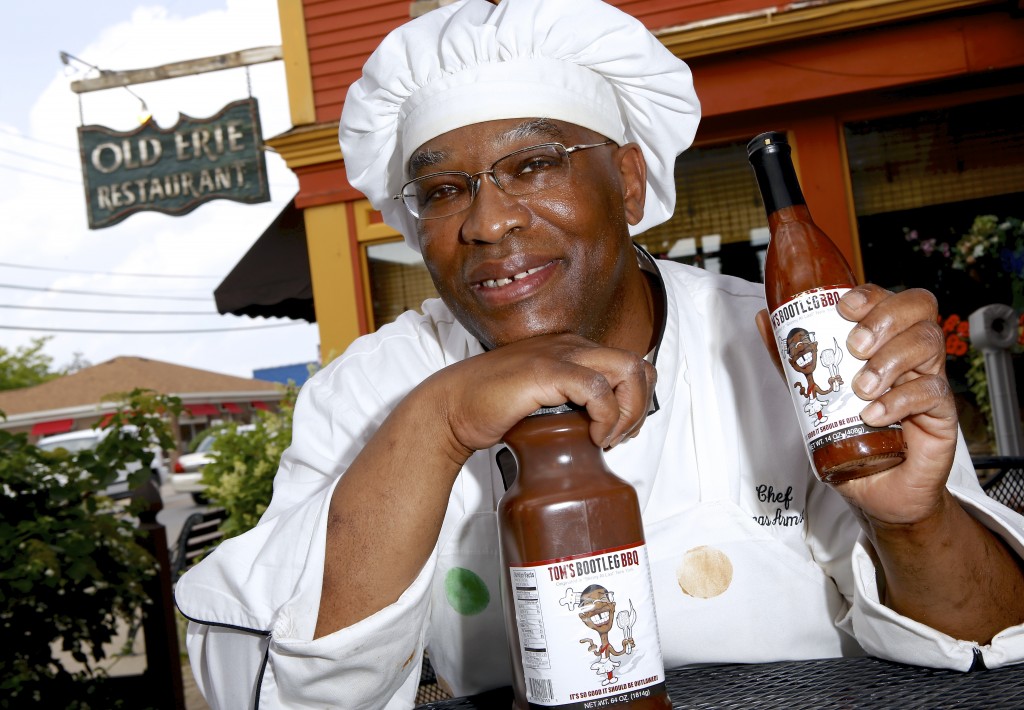 Armstrong, 55, grew up in the Finger Lakes and moved to Skaneateles in 1995 after working in culinary/food service at Hobart and William Smith College in Geneva, Wells College in Aurora, and at several colleges in New England. For 17 years, he worked as a chef at Rosalie’s Cucina in Skaneateles, and his barbecue sauce has its roots in that kitchen. He originally sold the sauce in wine bottles but has since changed to more traditional 14-ounce condiment-size bottles, always with his grinning, gap-toothed caricature on the label.

Many barbecue sauces, Armstrong says, are too sweet or too tangy. He says his sauce is just right, with a hint of both sweet and heat. “It’s a different type of barbecue sauce,” Armstrong says. “It tastes different and the bite lasts on the palate. It goes with everything: chicken, ribs, brisket, smoked lamb chops. I’ve done everything with my product.”

This year has been one of change for Armstrong and Tom’s Bootleg BBQ Sauce, all of it positive. Armstrong joined the Old Erie Restaurant as a chef last spring. The restaurant offers classic American fare like steaks and seafood, German specialties and also features a tavern menu and “BBQ Wednesdays” for lunch and dinner. His barbecue sauce is now being made by Lanovara Specialty Foods in Rochester, and the company may distribute it as well. Look for a new bottle design later this summer, Armstrong says.

Armstrong does much of his own sales and promotion, calling on stores, restaurants, wineries and specialty shops to boost interest in his product and pick up new accounts. Green Hills Farms near Nedrow carries the sauce, as does Mazzye’s Meats in Liverpool. He’s also had success getting his product placed in several Ace and True Value hardware stores in Central New York, as well as the famous Old Forge Hardware. Look for it in the grill department.

Armstrong’s goals are to get his sauce in Wegmans and Tops stores, and to have his own 50-seat restaurant some day. For now, he’s pleased with the response to “BBQ Wednesdays” at the Old Erie Restaurant and doing his best to keep diners coming back. “Some weeks have been a sellout,” he says.

Barbecue sauce isn’t just for grilling. Tom Armstrong likes to use his sauce on homemade pizza or swirled into cream cheese for bagels, among other things. Here’s his recipe for macaroni and cheese: