For Sara Robin and My Lucky Tummy, cooking is more than just combining different ingredients together. It is a way for her to connect with her Pakistani roots and find comfort in an unfamiliar place.

Robin was one of eight chefs who cooked for the October editions of My Lucky Tummy, a series of culinary adventures featuring foods from around the world.

My Lucky Tummy is a pop-up event organized twice a year by Adam Sudmann, who also runs the With Love restaurant at 435 N. Salina St.

Most of the chefs who cook for the event arrived in the United States as refugees or immigrants. According to Sudmann, gatherings like these bring individuals from different backgrounds together. It is also a way for chefs to connect to where they came from.

“Sometimes when you’re far from home and you miss home, one of the things that makes you feel comfortable, and like you’re back at home, is to cook something that you know and love,” Sudmann said. “It’s like you’re in a new place and you brought a little piece of home with you.” 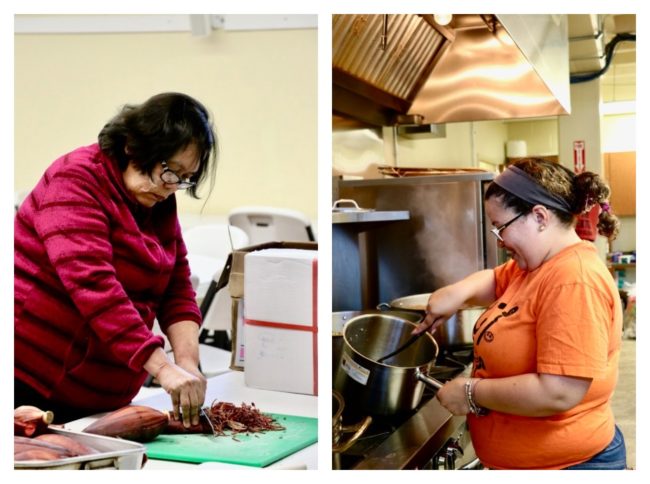 Most of the chefs who cook for the event arrived in the United States as refugees or immigrants. (Michael Davis/Syracuse New Times)

Robin, a recent graduate of Onondaga Community College, previously worked at With Love, and now runs a catering business in Syracuse. She hopes to start a restaurant, because when she first came to the United States as a refugee in 2012, she couldn’t find any places with good Pakistani food.

“I missed my mom’s food, I missed the street food,” she said. “I decided to cook at home, and then I met Adam. Three years ago, he asked me if I’d like to cook for the My Lucky Tummy event, and I was like, ‘Sure, why not?’”

“I don’t do very traditional recipes. When I was growing up, I made my own recipes. I always wanted to do something unique,” she said as she flipped through pictures of the various biryani dishes she had made. “I learned the spices and did many experiments to create something unique and special.”

The My Lucky Tummy menu is always changed up to represent more countries, and to cook more creative dishes. Many ingredients needed for certain foods are not available in Central New York, so they have to be ordered from outside the state or even the country.

My Lucky Tummy hosted two events last fall. For the Oct. 21 fundraiser held at St. Peter’s Episcopal Church in Cazenovia, profits from the occasion went to refugee resettlement efforts in the area through Common Grounds. A second event, held Oct. 23 at Sky Armory in downtown Syracuse, was part of the Welcoming Economies conference, and was a collaboration with the Syracuse University Department of Art and Music Histories.

Dishes served at the Sky Armory came from all corners of the world, from Afghanistan to Ethiopia to Vietnam.

According to Sudmann, events like My Lucky Tummy blur the boundaries between communities and bring people closer together. It also can help to break down common stereotypes of refugee and immigrant communities.

“We tend to put people in a box, like ‘The Refugees,’” Sudmann said. “I hear people talk about that all the time, which is sort of funny because it’s kind of like saying ‘The People.’”

Robin says there is something special about sharing dishes close to her heart with the people around her.

“The Syracuse community has given a lot of respect to my food and to my culture,” she said.