The radio show starts with the crack of a beer and ends after plenty of laughter. The unlikely team of Sean Johnston and Cabrina Gilbert has become known worldwide thanks to The Irish Power Hour, a raucous 60-minute blast of humor and Celtic rock airing Sundays at 9 p.m. on WTKW-FM 99.5 (TK99). The program celebrates five years of weekly shenanigans this month.

Johnston and Gilbert met at Lamar Advertising, where Johnston has been sales manager for 15 years and Gilbert has been graphic art director for 10. Although he’s got three kids and a full-time job, Johnston has never been one to shy away from extracurricular activities. He’s also been a main player for 10 years in the annual Syracuse Irish Festival held at downtown’s Clinton Square (he’s co-chair with Marty Cahill), plus he performs with two bands: the Causeway Giants and Attractive Nuisance, the latter with Gilbert. 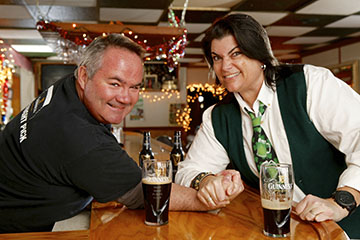 He recalls mentioning his radio idea to his wife, Erika. “Now she says, ‘I must have had pregnancy brain when I said yes,’ but she did,” he recalls. “I remember when we started because she was pregnant with our third kid. . . like eight months pregnant.”

Even funnier to Gilbert is that of all the ideas Johnston had run by her in the past, he had no intention of involving her in The Irish Power Hour. “I told Cabrina, ‘I’m starting something and you don’t have to do a thing,’” he says. “She was like, ‘Yeah? Do you have logo?’ No. ‘Do you have a website?’ No. You might have to help out a bit, but I’m having a radio show. She was immediately like, ‘You son of a bitch! You’re doing the one thing I’ve always wanted to do and now I won’t be a part of it?’”

Johnston gave in, inviting Gilbert as a guest host and letting her take over when he was on vacation. The show started as a one-man affair in March 2009 on Sundays at 6 p.m. on WXTL-FM 105.9 (then Lite 105, now rebranded as The Rebel), but it quickly became obvious that two rowdy voices were better than one.

“My first time I walked into the booth was my first time in a radio booth,” Johnston says. He had all the music prepared, but it took time to figure out how to talk on the radio. Learning how to operate the program also proved challenging, especially with a technician prone to disappearing.

“He left me and said, ‘You’ll be on autopilot. You’re fine. I’ll be downstairs,” Johnston remembers. “And then the music started skipping.” 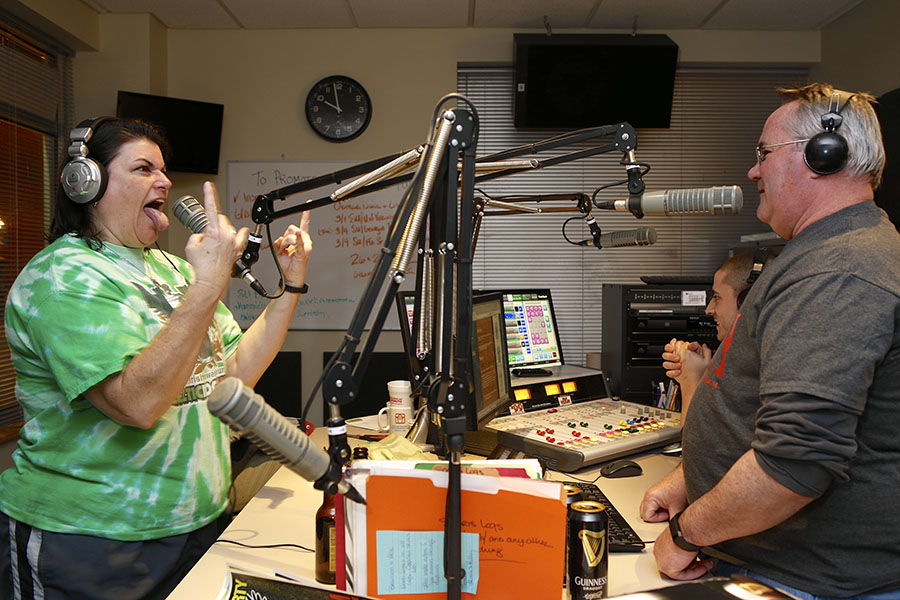 Another problem was that Johnston and Gilbert’s high-energy conversations and music never matched with the station’s light-music format. “We started on a station that was all background music and then we’d punch through this hour of Dropkick Murphys, and then it was back to elevator music,” Gilbert says. “Then they switched to all talk and we’re the only music show. We hadn’t been a fit the whole time we were on the station.”

They moved to WAQX-FM 95.7 (95X) on Sundays at 9 p.m., a better slot for listeners and for Johnston’s home life (he could have dinner with the family then). “My wife listens now,” Johnston says.

“Yes, she doesn’t beat him as much,” Gilbert adds with her straight-faced humor.

When 95X’s parent company Citadel was sold to Cumulus in 2011, program renewals were put on hold. And since The Irish Power Hour was in a slot bought by the radio team, which in turn sells commercial time to advertisers, Johnston and Gilbert thought the show might have reached its end.

“We were OK to walk away from it, but people were like, ‘You gotta get it back on,’” Gilbert says. The duo tried creating a traditional podcast, with Johnston and Gilbert at a desk with a recorder, a gambit that didn’t work. So Johnston reached out to Galaxy Communications’ Mimi Griswold, then program director of TK99, who immediately replied that she and others in the building had heard of the show and would be happy to host them.

“I was like, ‘What? People are actually listening?’ Johnston says, still in disbelief.

“That’s the mindset we still have to get out of,” Gilbert says. “For five years now we’ve made these jokes about no one listening, but now the people who listen on the regular are like, ‘Screw you guys! We listen every week!’ So we gotta back off that whole ‘nobody’s listening’ thing. The people who listen are getting offended.”

The Irish Power Hour moved to TK99 in March 2012. Alex Conn, known on-air as Bender, became their producer, and through his efforts the show gradually became more polished. 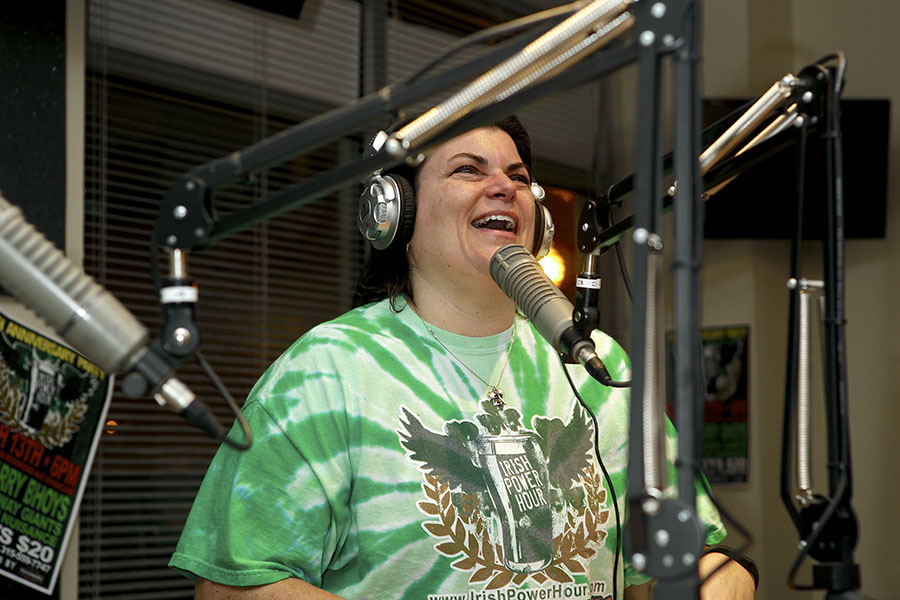 “He {Conn} comes to us with ideas,” Gilbert says.

“You’ll hear the little music beds he puts in,” Johnston adds. “We never had that. And people think we script it, write it out and rehearse it,  but I do the opposite. I’ll have something I want to do and try to stump her with it.”

“The most he’ll do is say, “I’m gonna say this,’ and I say OK,” Gilbert says. “But that’s just to start the conversation. Whatever he’s got is behind that, and that’s what he’s gonna hit me with.”

It’s that energy that makes the duo so lively and fast-paced on air. The quick wit of Gilbert and the ever-prodding smile behind the voice of Johnston give the show personality. So does the music. 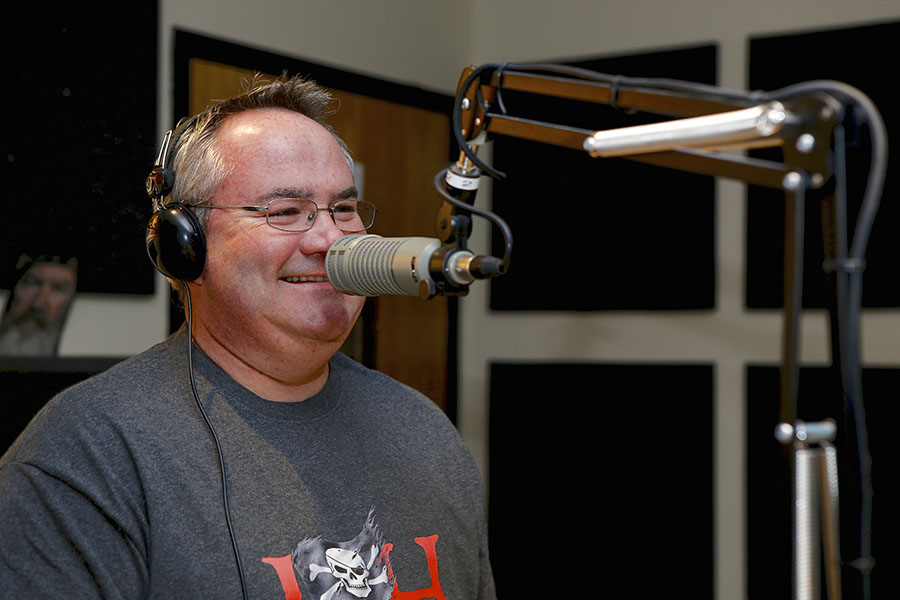 Although it seems like Celtic rock happens only around St. Patrick’s Day, there are bands around the world, including Syracuse, giving life to the genre throughout the year. It was love of this music, and two large boxes of Celtic rock CDs from Marty Cahill, that continues to fuel the show. As a result, fans and bands of the genre are still discovering one of the only outlets available to showcase their music.

The Irish Power Hour  plays groups hailing from Australia to Germany, California to Indonesia, many of which find the show through online podcasts. They’ve also made connections by linking with bands and others in the Celtic rock community through social media.

The love of the music comes from Johnston’s 100 percent Irish background: Both of his parents are from Ireland. (“He’s deep,” Gilbert adds. “You can’t understand either of his parents.”) And his love grew when he started his own Celtic rock bands in Syracuse: the Causeway Giants in 2004, plus Attractive Nuisance with Gilbert in 2011.

The infectious music has proven popular among all types of people. “We had a guy in the military, retired now, who wrote us and said he would download as many podcasts as he could to take to the sandbox because he listened to us the whole time he was over there,” Gilbert says. “He’d replay the shows. He loves Celtic rock.”

Other Irish Power Hour events include Celtic rock clinics, which came together when Johnston and Gilbert featured band members from Enter the Haggis, Scythian and the Elders as they spoke about their music to fans ranging from ages 14 to 55. And their weeklong School of Celtic Rock, held in September 2012, had students learning an instrument and performing Celtic music on the Irish Festival stage, with a later gig at the Lost Horizon with The Fighting Jamesons.

“Originally they {Fighting Jamesons} said we {Attractive Nuisance} could go up on stage with them afterward,” Gilbert says. “But we had kids that went through this Celtic rock camp with us that came to the gig, and those kids got to rock out with the Fighting Jamesons. They started out learning something, then the Irish Fest, then up with the Fighting Jamesons. We had to grease their ears to get them out the door. It’s that kind of excitement you see in kids’ eyes: learning music, seeing how it works and where you can go with it. It’s rewarding for us.” 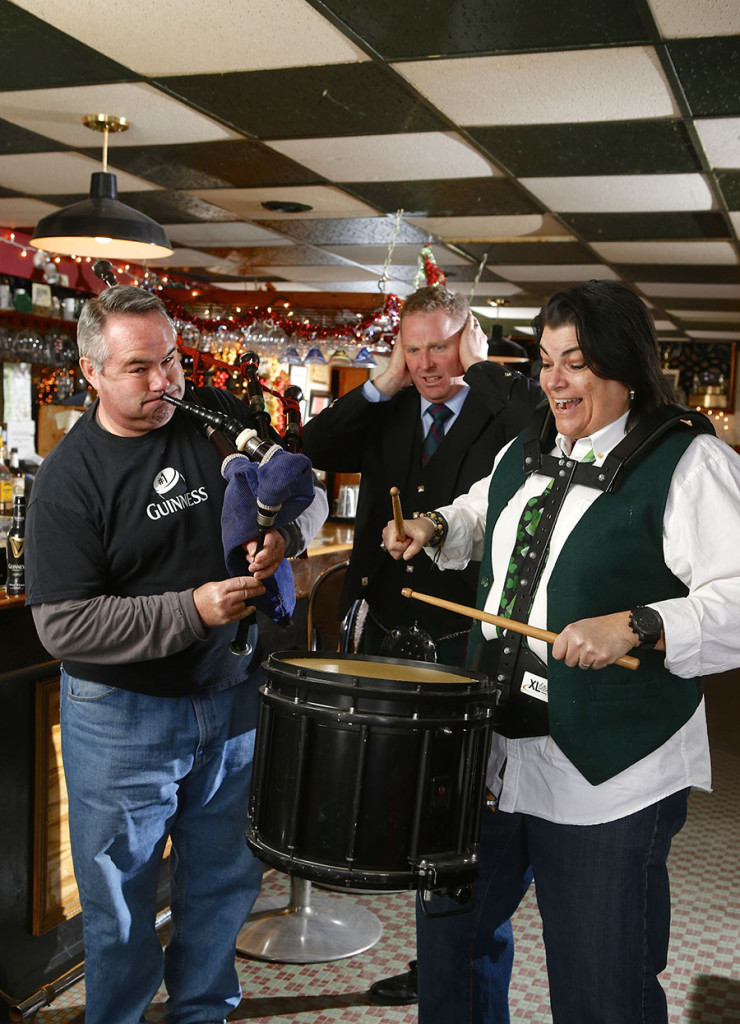 The duo is grateful for their sponsors, such as Guinness beer (naturally) and Johnston’s Ballybay Pub, 550 Richmond Ave., where they host many events, including the program’s fifth anniversary bash on Thursday, March 13, 6 p.m. The Causeway Giants, Attractive Nuisance and the Glengharry Bhoys will rock the night away for a $20 tariff; visit irishpowerhour.com for details.

They also host an annual music competition, in which any artist that has participated in an Irish Power Hour event throughout the year is eligible for the honor. Fans can vote from September’s Irish Festival through the end of the year, with winners given a celebratory beer stein. In 2012, the winner was also featured with an Empire Brewing Company beer named after them: Screaming Orphan Red, named after the all-female band the Screaming Orphans.

The duo also supports the local St. Baldrick’s Day hair-shaving fundraiser. Johnston hopes his team will raise more than $100,000 this year. He has shaven his head seven times, making him a “Knight of the Bald Table,” and Gilbert will shave her noggin for the fourth time on March 30 at Armory Square tavern Kitty Hoynes. (For information, visit  HERE)

Above all, the team is still having fun and spreading Irish cheer. “He’s Lucy and I’m Ricky,” Gilbert jokes. “He gets into crazy schemes and I have to talk him down or get him through.” The success of The Irish Power Hour comes from their energy and love of the music and culture. Everyone knew there was Irish spirit in the Salt City, but now the world knows there’s more to it than green beer once a year. There’s Celtic rock all year-round.