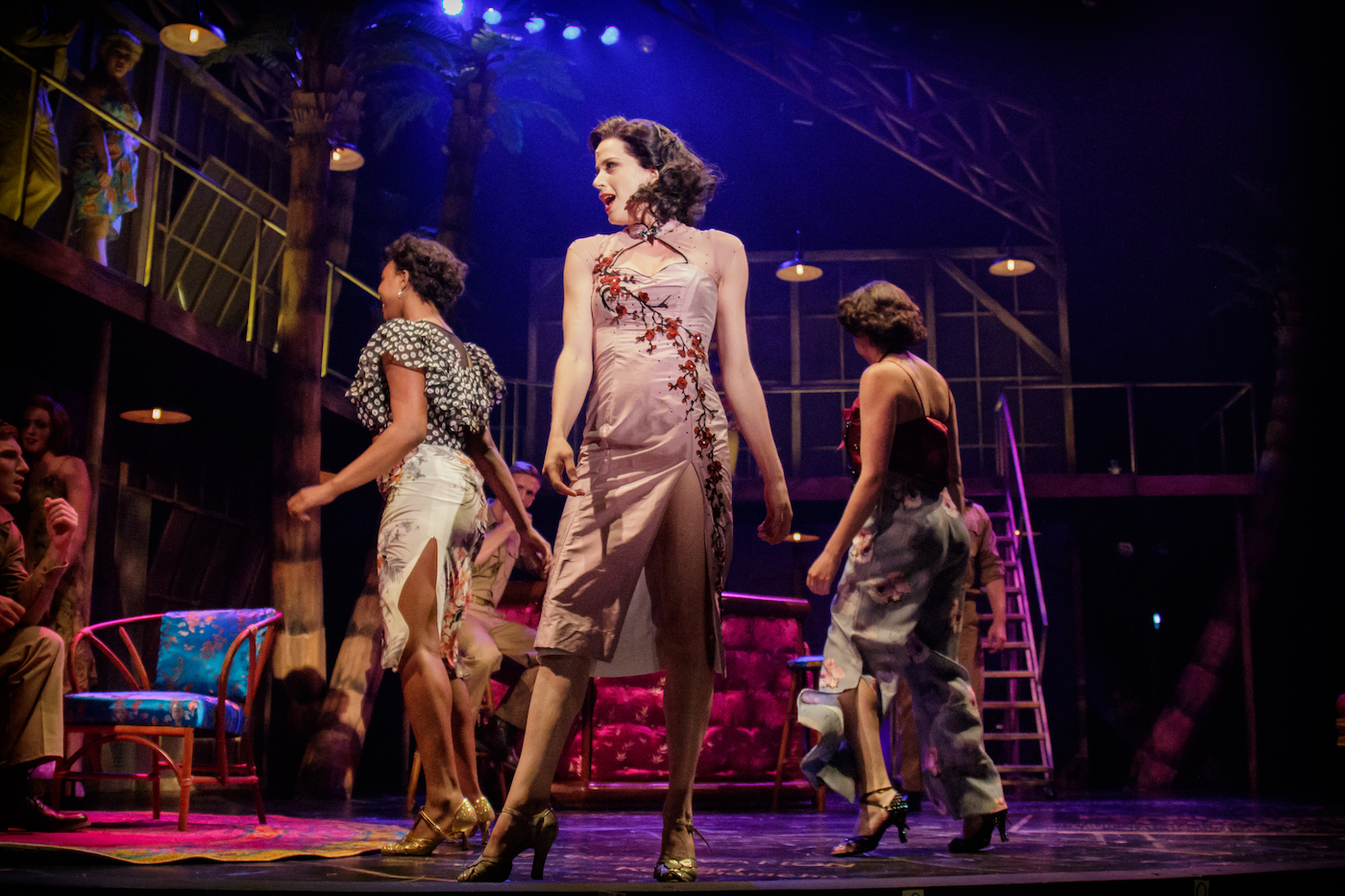 Merry-Go-Round’s adaptation of “From Here to Eternity” does Sir Tim Rice’s lyrics proud.

London’s West End is closer to Owasco Lake than we thought. Tim Rice’s musical adaptation of James Jones’ novel From Here to Eternity opened at London’s Shaftesbury Theatre in October 2013, then closed six months later. Not commensurate with the show’s artistic merit, thought the show’s creators.

Present during the London run was the Finger Lakes Musical Theatre Festival’s artistic director Brett Smock, who helped to ensure that a somewhat revised second mounting would take place here at the Merry-Go-Round Playhouse. The local team gives Eternity their all. It’s one of the most polished and exciting productions of recent summers.

When most people hear the title From Here to Eternity they summon up the image of bathing-suited adulterers Burt Lancaster and Deborah Kerr embracing on the beach when they are almost washed away by the surf. Yes, that movie scene is evoked in Auburn, with lights instead of water, but most of the show is about being in the U.S. Army in the heedless last days before the attack on Pearl Harbor in 1941. Hawaii, not yet a tourist paradise, was a far-away place where rules were applied haphazardly.

Bill Oakes’ book for the musical, tweaked for Auburn by Donald Rice, does not adapt director Fred Zinneman’s 1953 film but rather turns to Jones’ unexpurgated original draft for the novel, which did not appear until 2011. Many details are now edgier than censors would then allow. The Honolulu gentlemen’s club is, more plausibly, a brothel called the New Congress Club. It’s also best to forget who played whom in the film (Montgomery Clift, Frank Sinatra, Ernest Borgnine, Donna Reed), because the cast in Auburn starts fresh with the words and music at hand.

Smock and his team banish the memory of the movie in opening scenes. Stanley A. Meyer’s set and Dan Ozminkowski’s lighting take us to a Hawaii where the prison-like barracks dominate the palm trees. Christopher Ash’s projection design keeps us abreast of what was happening in those fateful months.

The male chorus, all in period uniforms, could stand in for NFL linebackers. In the opening number, “G Company Blues,” choreographer Smock has fused dance routines in calisthenics. At one point they sing a chorus of Tim Rice’s lyrics while they’re doing push-ups. For all their physical energy the men are still singing the blues. They may have a balmy December, but it is still the winter of their discontent. 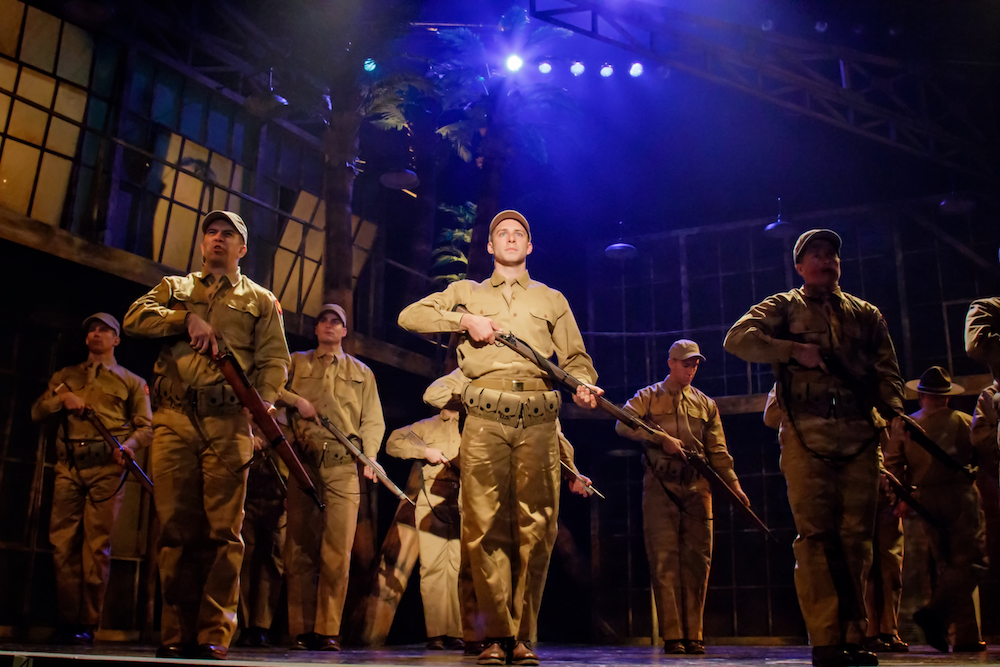 Pvt. Robert E. Lee Prewitt (Corey Mach) is a guilt-ridden ex-boxer from Kentucky whom the arrogant company commander, Capt. Holmes (W. Joseph Matheson), would like to push back in the ring, hoping it would raise the officer’s prestige and rank. Although Mach’s Prewitt brings more of the sensitivity of an artist than a scrapper, his baritone takes charge with the first solo, “Thirty Year Man,” on the bleak prospects facing a private in a peacetime army. His passionate “Fight the Fight” is one of the stronger numbers of the show and also boasts some of Tim Rice’s best verbal play.

Prewitt’s immediate streetwise counselor is Pvt. Angelo Maggio (Michael Tacconi), a scrawny hustler from Brooklyn. He will lead the way to the New Congress Club where Prewitt meets Lorene (Paige Fouré), whose charms the men celebrate in a duet. Last seen as Sally Bowles in Cabaret, directed by Smock, Fouré appears to have made the role of Lorene more captivating than it is as written. Her duet with Prewitt, “Love Me Forever Today,” is justifiably an audience favorite.

Although Lorene turns out to have the heart of gold, she haggles over the small fee at her first negotiation. This might imply the New Congress is a low-down dive, except the madam, Mrs. Kipfer (Jeannie Hines-Clinton), speaks with patrician grace. The New Congress girls, meanwhile, are seven tall gorgeous women who change from one chic period costume to another, designed by Lucy Brown. Fashion buffs in the audience will be distracted and delighted.

Prewitt and Maggio’s sergeant is the towering Milt Warden (Kevin Aichele), who initially looks a thoughtless brute willing to serve the captain without question. We learn early in the action, however, that Warden is pursued by the captain’s bored and needful wife, Karen (Aleka Emerson). Her yearning “Another Language” is the third number in the show, but not until later do we find why she takes such risks as visiting her lover at the barracks. Exposure would bring not only the usual obloquy but 20 years in the stockade for the sergeant. Karen’s full story, however, makes her appear more sympathetic. Emerson is in the fullness of her power in the second act’s number, “I’ll Remember the Day.”

An important sub-theme of the show, and absent from the film, is the presence of a homosexual coterie adjacent to the barracks. The men know and they don’t know, but official exposure is catastrophic. The suicide of victim Daniel Bloom (Jonathan Gregg) is a necessary shocker that anticipates the Japanese attack that defines Pearl Harbor for us today and upends everyone’s lives.

Eternity’s score by the previously unknown Stuart Brayson is eclectic and sometimes derivative, such as the Elvis-sounding “Ain’t Where I Wanna Be Blues,” another audience favorite. We can’t know if the show is headed for the stars, but Sir Tim Rice and company have been fabulously served by the Auburn launching pad.