People who use typewriters and answer the loud bells of heavy desk phones are still worth listening to. Steven Dietz’s Lonely Planet, set specifically in 1991, employs light absurdist humor and extended metaphors before the audience at Ithaca’s Kitchen Theatre Company figures out just where it’s going.

Mild-mannered, 30-ish single guy Jody (Nat DeWolf) runs a map store in an unnamed city, in which no customers ever enter. His solitude is smashed by motormouth Carl (Karl Gregory), a fabulist with a different cockamamie story to tell every time he enters. Variously he claims to fix auto windows or restore paintings or write for the tabs. “When you write for a tabloid,” he roars,” you have to make up a lot of news.”

Lonely Planet caused a bit of a stir 20 years ago and has been neglected since, but that does not mean it’s dated. The reason Kitchen’s artistic director Rachel Lampert is reviving it now appears to be that it’s such a terrific vehicle for returning favorite actor Karl Gregory. A graduate of the Syracuse University Drama Department, Gregory was a star at the Kitchen for about 10 years, and more recently has been moving into stage and movies. Dietz’s lines for the mercurial, impish Carl are aiming for Noel Coward’s brilliance, such as, “Irony is the penicillin of modern thought.” Gregory makes them gleam, even the zircons among them. 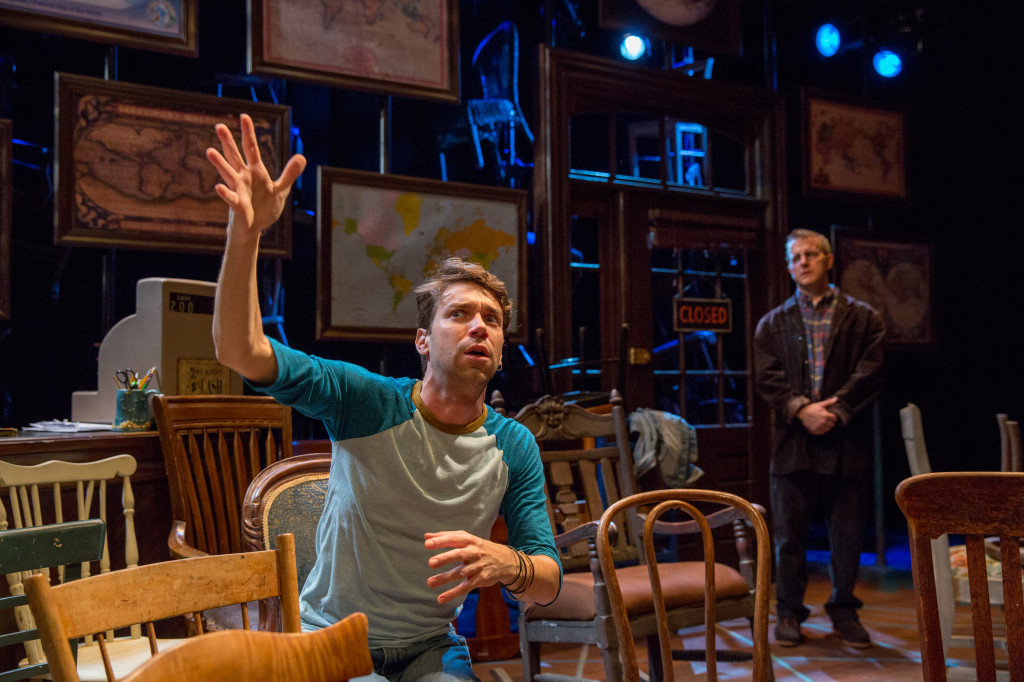 As the amused audience does not see where this is leading, one has to remember that the AIDS plague was raging in 1991, and was still being denied rather than being addressed. Carl begins to bring in empty chairs for people disappeared from the neighborhood, male and female, until the room is filled with chairs. The script is initially playful and quizzical, and it’s possible that contemporary audiences might be slow to guess the meaning without reference to the date of the play’s opening. Dietz dissolves any ambiguity by having Jody read from Ionesco’s The Chairs and explain the allusion.

Under Lampert’s sharp direction, Lonely Planet is the least political of AIDS plays, the polar opposite of Larry Kramer’s The Normal Heart, with no anger or finger-pointing. Instead it is a timeless rather than timely look at how difficult it is to tell the truth.