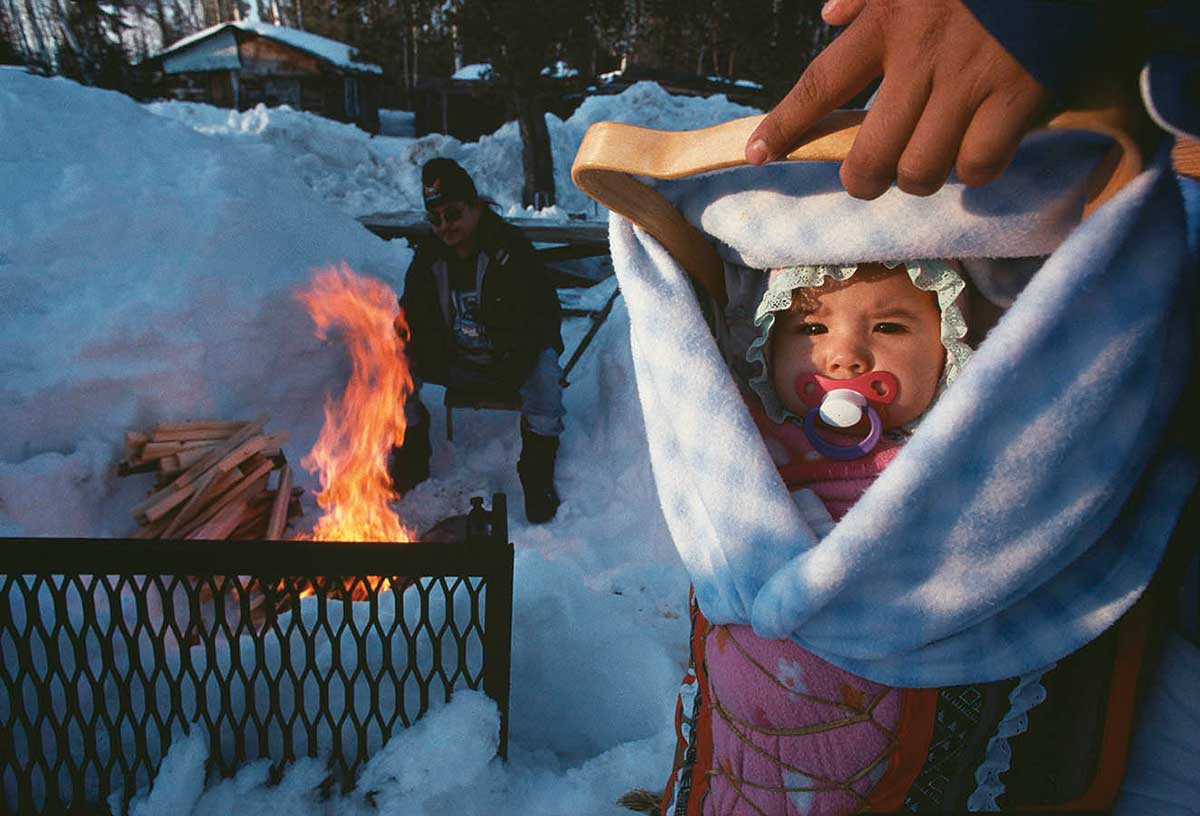 Starting in 1988, Syracuse photographer Michael Greenlar visited an Algonquin community in Quebec, Canada, several times a year. In a remote area 90 miles from a city, the members of the First Nation Algonquin Band of Barriere Lake live on a 57-acre reserve or in settlements located farther back in the bush.

Greenlar stayed at and photographed a settlement called Kokomville, which is Algonquin for “village of grandmothers.” A selection of Greenlar’s images from his new show Kokom Lena of the First Nation Algonquin is currently exhibiting at two venues: ArtRage Gallery, 505 Hawley Ave., and the Skä•noñh Great Law of Peace Center in Liverpool.

The exhibit focuses on a respected elder, Kokom Lena Jerome Nottaway, who lived from 1913 to 1997. She was the mother of 15 children, a midwife, a healer utilizing plants from the bush, a community leader active in a campaign against logging companies clearcutting forests and an advocate for traditional ways of living.

In the two-site show, Greenlar traces her connections to an extended family and to land and water. One photo portrays Lena Nottaway paddling a canoe across a lake. In another image, her grandson, Jacob Wawatie, strides across a frozen lake in midwinter as he sets out to trap beaver. 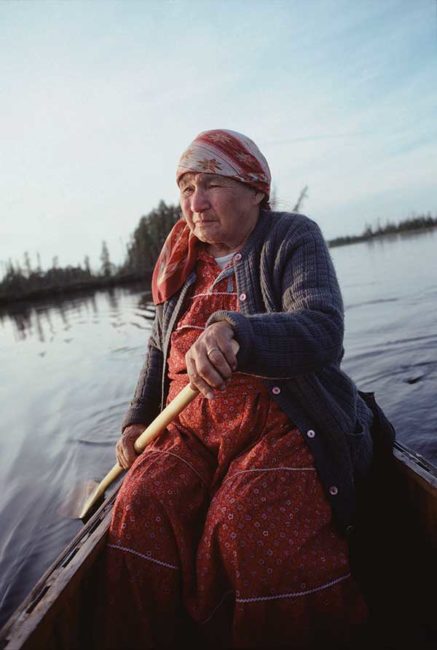 The people living at Kokomville survive by hunting, trapping and fishing, and some of the best images document that work. For example, Lena and Jacob sit on a moose he shot. The animal was later dressed and processed, supplying not only many pounds of meat but also moose hide used for several purposes. In a companion photo, Lena Nottaway’s daughter, Lena Jerome, stretches hide to make webbing for snowshoes.

And several images document community events: Lena Nottaway blessing a baby; her grandson’s wedding, which blended Algonquin customs and Roman Catholic ritual; and her funeral. A photo taken at the gravesite depicts a floral wreath decorated with an image of a pipe; Lena was known for the pipe she carried with her.

The exhibition documents life at Kokomville but certainly doesn’t romanticize it. Lena Nottaway outlived two husbands, both of whom died in hunting accidents in which they drowned. Moreover, the community survives only by working hard, by making use of natural resources and sharing them. When Jacob shot the moose, the meat was shared with the entire community.

In addition, it’s sometimes necessary for Kokomville residents to seek work elsewhere. Greenlar was photographing migrant workers in western New York during the 1970s when he first encountered Jacob Wawatie. He and others from the settlement were working at a mink farm.

Those ties led to a long-term friendship, to an initial visit to Kokomville in 1988 and to subsequent trips. Ongoing contacts made it easier for Greenlar to take intimate photos. They include images of a child in a cradleboard, Jacob and his son in a canoe and the funeral service for Lena Nottaway’s son, Dolphis Jerome. These photos provide emotional depth and elevate the overall project. 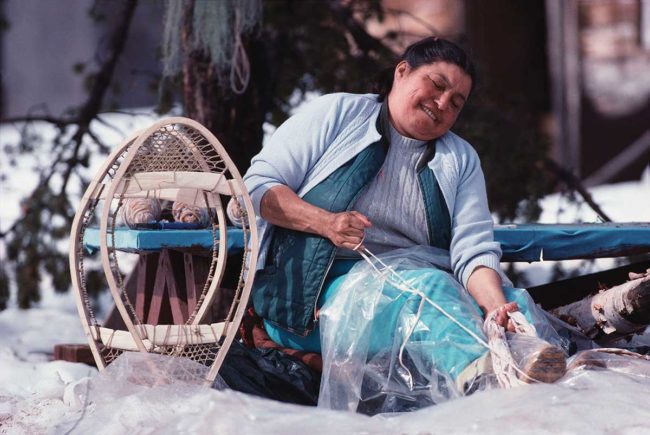 Irene Jerome stretches strands of moose hide to be used for the webbing of snowshoes. (Photo by Michael Greenlar)

This isn’t the first time Greenlar has done in-depth work. He has photographed charcoal workers in Haiti, lacrosse at the Onondaga Nation and Hmong communities in Laos dealing with bombs and ordinance left over from the Vietnam War. In addition, he’s worked as a staff photographer for the Syracuse Post-Standard.

Kokom Lena of the First Nation Algonquin is on display at ArtRage through March 23. The gallery is open Wednesdays through Fridays, 2 to 7 p.m., and Saturdays, noon to 4 p.m.

There will be several presentations in conjunction with the ArtRage exhibit. On Feb. 28, 7 p.m., Oren Lyons, faithkeeper of the Turtle Clan of the Seneca Nation of the Iroquois Confederacy, will discuss ongoing attempts to erase indigenous culture and language. On March 4, 7 p.m., Greenlar will deliver an artist’s talk. Both events are free and open to the public.