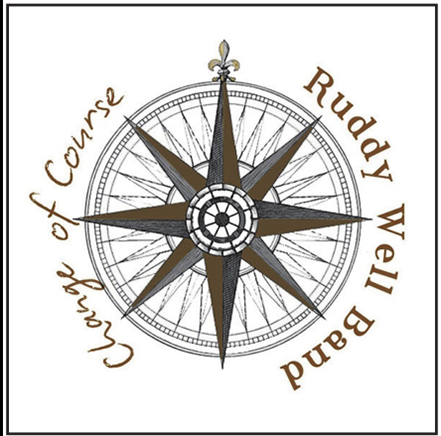 Change of Course (independent) There’s no ambiguity when it comes to figuring out who and what the is. They’re straight-ahead acoustic charm wrapped up in passionate and ample fiddle lines and earnest songwriting.

The quartet, —Andrew Ruddy, Monique Ritter, Ryan Burdick and Blake Propst— brings innocent, heartfelt, chugging bluegrass that might remind fans of a much (much) tamer version of the Binghamton band Driftwood. While Driftwood uses powerful dynamics to prove their points, Ruddy Well errs on the side of consistency, delivering a CD that sounds professional (recorded at SubCat Studios) but remains fairly steady on the dynamic line. Energy hits highest in the appropriately titled “High” and mellows sweetly in the closing lullaby, “Goodnight Anna,” but the band never hits overwhelming peaks or valleys.

Still, the group, led by the songwriting of Ruddy, brings all the beauty of classic bluegrass to modern tunes: chucking violin (when the bow hits the strings sharply, cutting off the sound, often on upbeats), full harmonies and sweet lyrics about “lips that taste like wine” (“Just Give Me Time”) and “I’ll cook you eggs if you wake by my side” (“I’m All Good”). The skilled vocals are refreshing and the musical work is clean, leaving a polished product in the case. With a clear identity and a crisp sound, this band is on the right course. For more information, visit ruddywellband.com.

Mark Music (independent) Every once in a while, a record comes out of Syracuse that makes progressive ears perk so much, we all remember (once again) that we’ve got a hotbed of talent all around us worthy of the national stage. wins that title this time.

Greg Pier’s vocal themes and delivery recall an OK Computer Thom Yorke, throwing the most fantastic quips by with that unaffected smooth drone that explodes into big belts on tunes like “Scrapper’s Blues.” The production is magnificent and the music is perfect in that perfectly weird way that keeps everything at the edge of the seat. “From the Center” opens with a fierce hook that disintegrates into lyrics about atoning for sins, tasting sugar in your tank and the green of leaves on a tree. Sometimes it’s tough to keep up with Pier’s lyrical journeys, but drummer Bob Kane and other musicians, including Chuck Gwynn and John Hanus, grab listeners’ hands and work as guides.

“Cruel, Cruel Aristocrats” dips into some deep grooves and ripping guitar that Jack White would approve, and “If Twenty” slows it all down to bring the heavy, the distortion and talk of a book beside the bed that “says what’s lost is meant to be lost.” Overall, the album (which took from 2009 through 2012 to produce) is more than deserving of the Syracuse Area Music Award (Sammy) it took away in March for Best Modern Rock Recording. With any luck, it will attract the ear of something or someone even bigger. The CD is available at Soundgarden and Gorham Brothers Music.

Live and Burnin’ (Free Will Records)

This band is all about dirty licks and clean transitions. And like true professionals, their live album is just as tight as any tweaked and buffed studio recording. They don’t need overdubs or autotuning. They just need a stage and, in this case, it was in New Hartford on June 22. The lucky audience got to witness righteous blues rock served hot thanks to the collective talents of Mark Doyle (guitar, vocals), Pete McMahon (harp, vocals), Joel Kane (bass, vocals) and Frank DeFonda (drums).

With ease, the four-piece takes listeners through a vigorous set of slow burners like “Need Your Love So Bad” and absolutely smoking romps like “Mark’s Boogie,” which features some of the best guitar work you’re going to hear anywhere. For those in doubt, first check the resumes of the players (Doyle has worked with artists like Bryan Adams and Meatloaf, and John Mayall has called McMahon one of the best harmonica players he’s ever heard) and then go in with a fresh head to get rocked clear off. Kane’s bass lines are as riveting as his vocals are passionate, and DeFonda is, as drummers can be, the glue of the entire operation as the group navigates through seamless transitions and styles.

The live disc features tunes familiar and new, with some surprises thrown in, including a tune from Eric Burdon and the Animals that McMahon admits he didn’t know prior. “Kind of a cool, old-fashioned boogie kind of thing with some psychedelic lyrics,” he introduces as the band digs into “Closer to the Truth/Hardlife Boogie,” a tune McMahon’s flawless vocals were built for. Every song is a highlight in its own right, but “Train Kept A’ Rollin’” is as hard and driving as they come and “I Just Wanna Make Love to You” gives the set an extra kick at just the right moment.

Doyle is a professional in every sense of the word, and it shows in more ways than one. Not only is his own talent proof, but the musicians he surrounds himself with turn his smoking riffs into a full-blown fire. For more information, visit markdoyleandthemaniacs.com.

All in the Family
12 Strings, No Boundaries
To Top