Baritone Henry Wilson brings many assets to sing romantic leads in heavyweight musicals. Many knew him from his band Mothercover, until he wowed everyone last winter as Jean Valjean in Baldwinsville Theatre Guild’s smash production of Les Misérables.

Wilson’s voice has range and power, both musically and in dramatic dialogue. He can cajole with honey and growl with abrasive vinegar. But it’s quite a different uniqueness that sets him apart from the crowd as the title character in the company’s production of Jekyll & Hyde: The Musical. Wilson sports the longest male hair in community theater: at once a mane, a crown and a mask. Hyde’s transformation has never been more immediate or convincing.

Apparently emboldened by the reception given Les Miz, director Korrie Taylor has designed Jekyll & Hyde to be even bigger. Music director Abel Searor leads a pit orchestra of 14 players, including a well-used cello. Given the acoustics of what is essentially a church hall, Taylor, Searor and sound engineers Mark Palinkas and Josh Wright deserve a trophy for keeping the 30 costumed players clear and articulate above the lyrical roar.

We may all know the complete story going in, but much of the dialogue in the play written by Frank Wildhorn, Steve Cuden and Leslie Bricusse is about metaphysics and troubling moral choices. Attention must be paid.

It’s a risk. Jekyll & Hyde famously lost money in its splashy 1997 run, but it has always had fanatical devotees, the Jekkies, and has grown in audience appeal in the past 18 years. Jekyll’s first-act solo, “This is the Moment,” has taken on a life of its own, but the show’s fundamental power cannot be captured on a CD. Instead, Jekyll & Hyde tells of two contrasting but parallel love stories, the virtuous and the debauched, both of which end badly. Director Taylor wants to care about both of them equally and not favor one over the other. 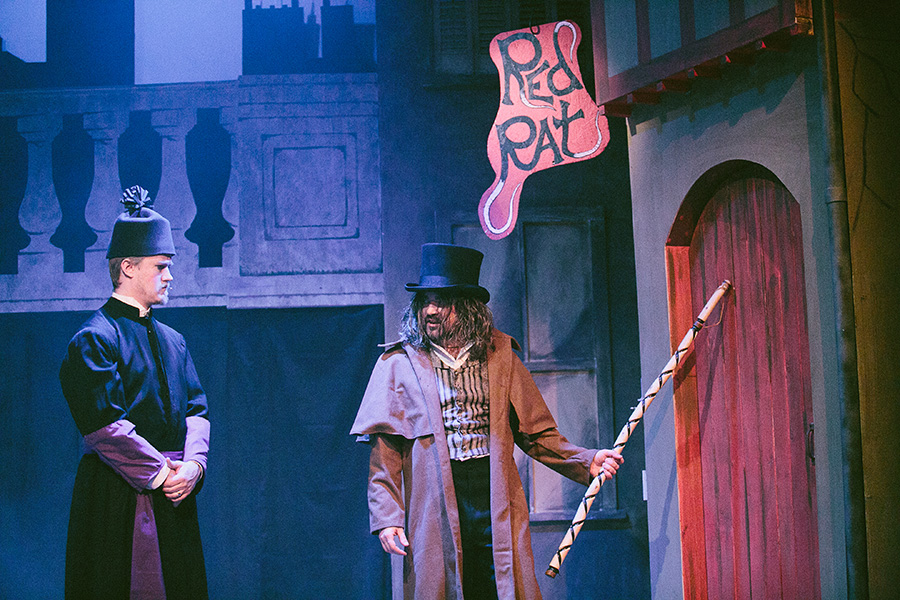 Soprano Jennifer E. Pearson, previously a welcome voice in demanding character roles, cuts a romantic new silhouette. Her blonde Emma Carew is queenly rather than being a mere princess. The big love duet with Jekyll, “Take Me as I Am,” is as equally affecting as the familiar “This is the Moment” in this interpretation. Well supported by her intelligent father, Sir Danvers Carew (a splendid Robert G. Searle), Pearson’s Emma also succeeds in making virtue alluring. Director Taylor wants audiences to be pulling for her.

Even though gentlemen may prefer blondes, brunette vice is often hard to beat. Taylor’s major innovation here is with the previously unknown Kristina M. Clark as the lowlife Lucy Harris, the object of Edward Hyde’s sordid lust. Often seen as a hardened tart, Clark and Taylor plumb Lucy’s pathos, tenderness and needfulness, not unlike Christopher Isherwood’s Sally Bowles before Bob Fosse and Liza Minnelli got a hold of her for Cabaret. There’s nothing retiring about Clark’s delivery as her big numbers, like “Bring on the Men” and “A New Life,” burst with Minnelli-like vivacity and energy.

Just as the two women in Henry/Edward’s life make a contrasting pair, so too do the realms in which they pass, at least in looks. Morally, there is little to choose between them. Henry and Emma meet in a world of learning, privilege and refinement, and Henry’s pal Utterson (Benjamin J. Sills) remains reliable throughout, as heard in such numbers as “Pursue the Truth” and “His Work and Nothing More.” Others are detestable whited sepulchers, including the stiff-necked Lady Beaconsfield (Kathy Burke Egloff), cowardly General Lord Glossop (Patrick Carman) and the hyper-hypocrite (but great tenor) Bishop of Basingstoke (Paul Thompson).

No moral pretense exists at the tavern-brothel the Red Rat, where blonde-wigged Nellie (Erin Williamson) is plying her trade. As an ensemble, put through steps by choreographer Stephfond Brunson, the Red Rat riffraff put on a better show than the upper-crust sorts, especially when led by the sordid-looking pimp Spider (Liam Fitzpatrick).

Baldwinsville Theatre Guild, founded before World War II, has gone through many transformations and does not appear to be dominated by a single personality. Instead, it enjoys warm community support with an army of volunteers. It has become a company honoring the traditions of the late, lamented Christine Lightcap, featuring big productions with strong voices in important roles and rich musicianship.