A conceptual design report for the Onondaga County amphitheater project was presented to the public at the Solvay High School auditorium on Wednesday July 9. County Executive Joanie Mahoney was joined by County Legislature Chairman Ryan McMahon, State Assemblyman Bill Magnarelli and representatives from C&S Companies and edr who showed the following 3D video tour to an audience of roughly 150 community members as part of the hour and a half long presentation.

The proposed outdoor event complex on the western shore of Onondaga Lake, referred to in the conceptual design report as Lakeview Amphitheater –  a roughly 17,500 capacity performance venue (including both covered and lawn seats) that also plans a nature area, vendor area, recreational trails and a “small outdoor community theater” in the style of Thornden Park’s Amphitheater.

“It’s been in the front of all of our thinking from the very beginning that this is a public park,” Mahoney stated in a press conference following the presentation. “The community amphitheater, with a few hundred seats, as opposed to 17,500 – we anticipate making that available to the public.” 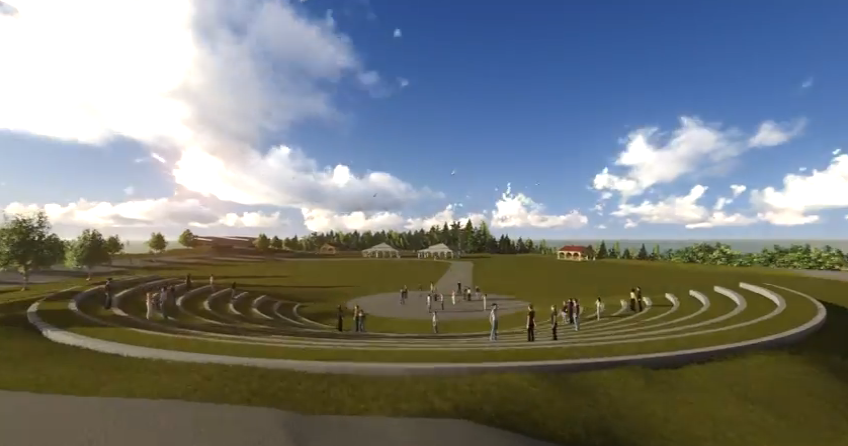 Onondaga County’s larger facilities are currently managed by Philadelphia based SMG who oversees operations at the OnCenter Complex (War Memorial, Civic Center theaters) and non-baseball events at the NBT Bank Stadium. As to who will manage the proposed new venue has not been decided.

“Whether we use that same model and contract out or whether we do it in house is an open question,” Mahoney remarked.

The project team includes Theatre Projects Consultants, a company with locations in Connecticut, Los Angeles, London and Shanghai that has consulted on over 1,200 projects in over 70 countries including the Oslo Opera House, The Whitney Museum of American Art and the Dubai Opera house.

Two conceptual design options, ‘The Beacon” and “The Cove,” were presented for the 17,500 capacity amphitheater. 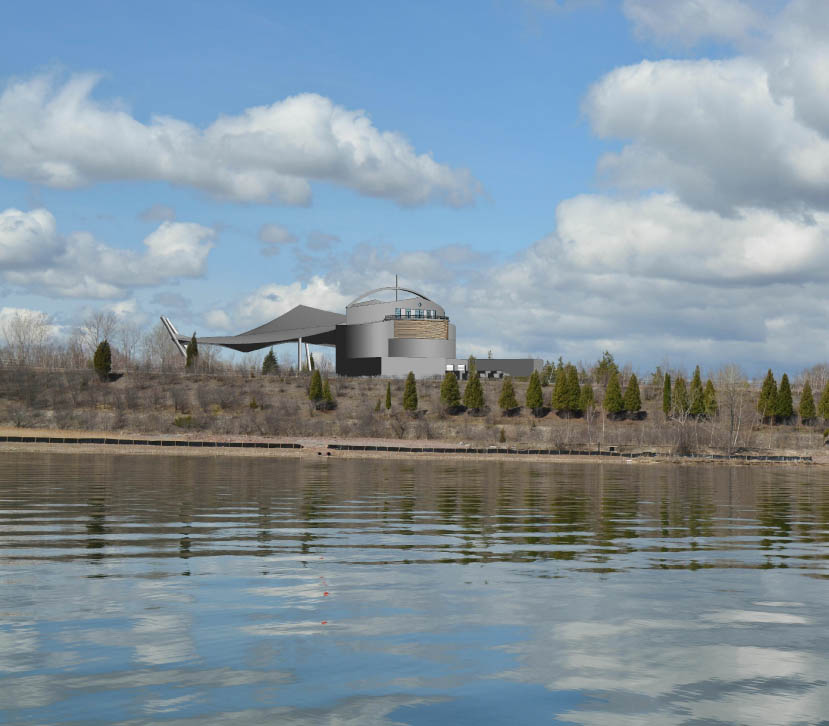 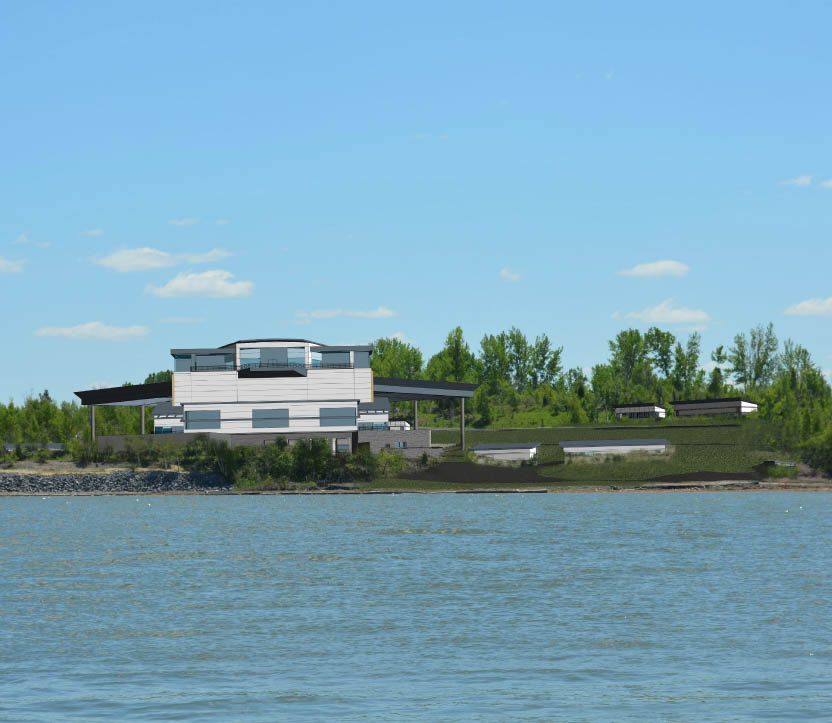 While two options were presented, the design option chosen for the amphitheater is ‘The Cove.’

The design documents describe ‘The Cove’ concept as “the alternative that embraces the water, but at the same time blends into the natural topography of Lakeview Point and creates a “park” atmosphere for the community.” Also noted is the amount of fill and earthwork required to construct ‘The Cove’ “is significantly less than the other options, thereby reducing the relative cost of construction.” 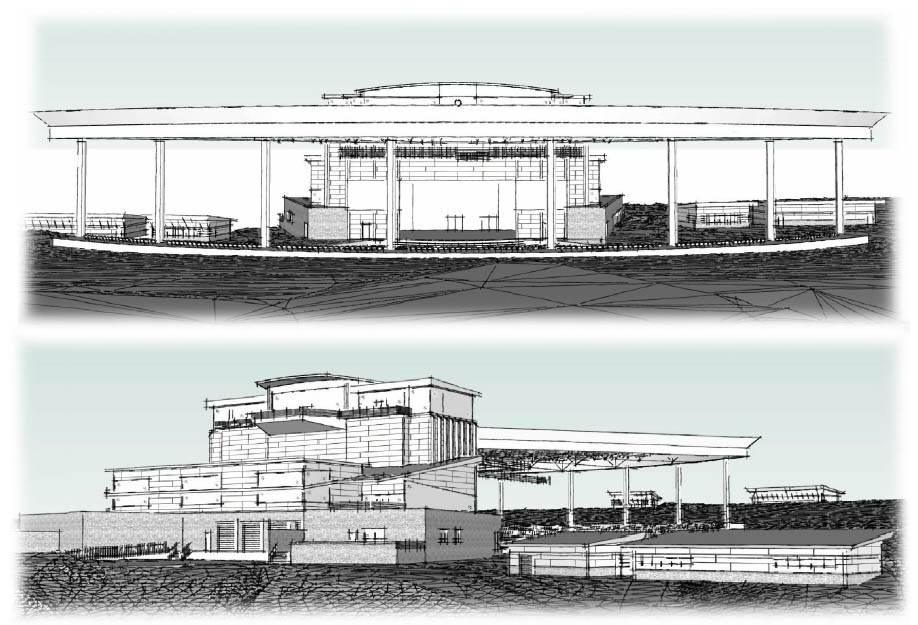 The site was also chosen, in part, due to its proximity to the State Fair parking lots, which will serve those visiting the facility.

“We have made an offer to New York State to ‘become the grandstand’ for the State Fair,” Mahoney said. “There’s different iterations that are possible for that scenario, whether we would book concerts for the state, whether we would just turn the facility over to the state and let the state book its grandstand concerts in that facility” is still unknown.

The current bike and walking paths of the West Shore Trail run directly through the site and will be re-directed during events at the amphitheater. “The bike path is going to be open when there’s not concerts there,” Mahoney said. When concerts and events are taking place, “there will be a separate path for people who are not interested in concerts to be able to make their way.” 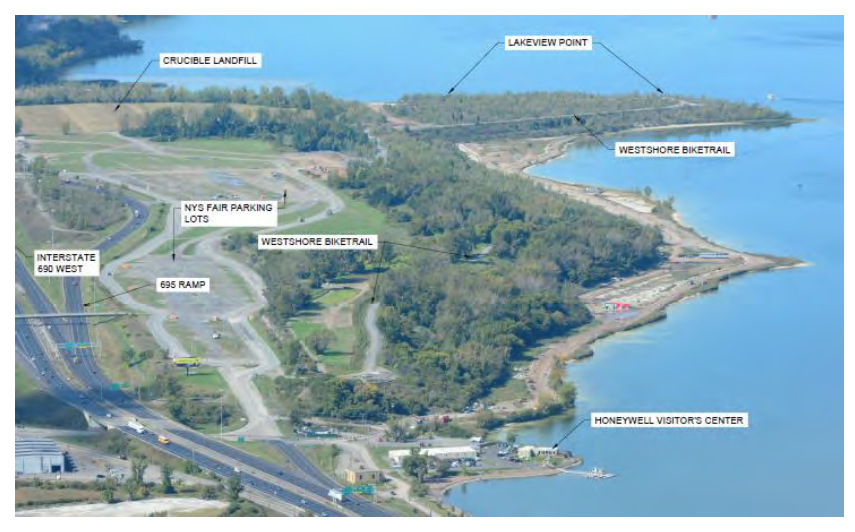 A traffic study is included in the documents that includes traffic flow patterns and solutions for smaller events up to  sold out shows.

The presentation also delved into a re-design of Bridge Street which leads to Solvay, and Milton Avenue to include a more pedestrian friendly route likened to the Connective Corridor, brownfield remediation and sewer upgrades. The Bridge Street proposal has three options on the table, and will move forward with community input sessions involving the residents of Solvay and Geddes.

While certain decisions have already been made, the county is encouraging community involvement as plans continue to unfold. “I’m looking for the community’s input on everything.” Mahoney said. “With the amphitheater it will be a reaction to our proposal, and to the other part [Bridge Street] the jury is still out as to where we want to go.” 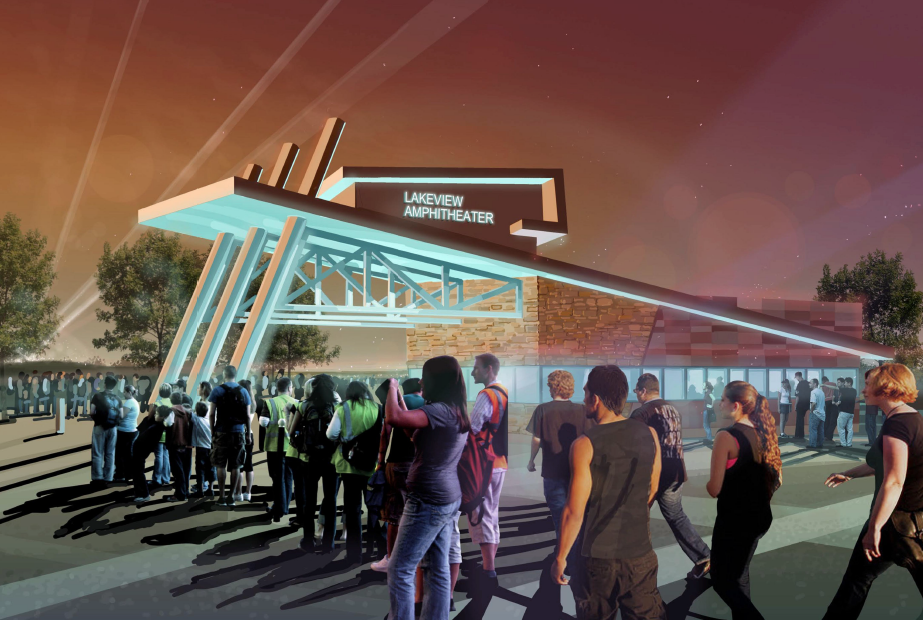 You can share your reactions and ideas in the comment section below or by emailing the county with feedback at: [email protected]

WATCH: Video of the full presentation below: