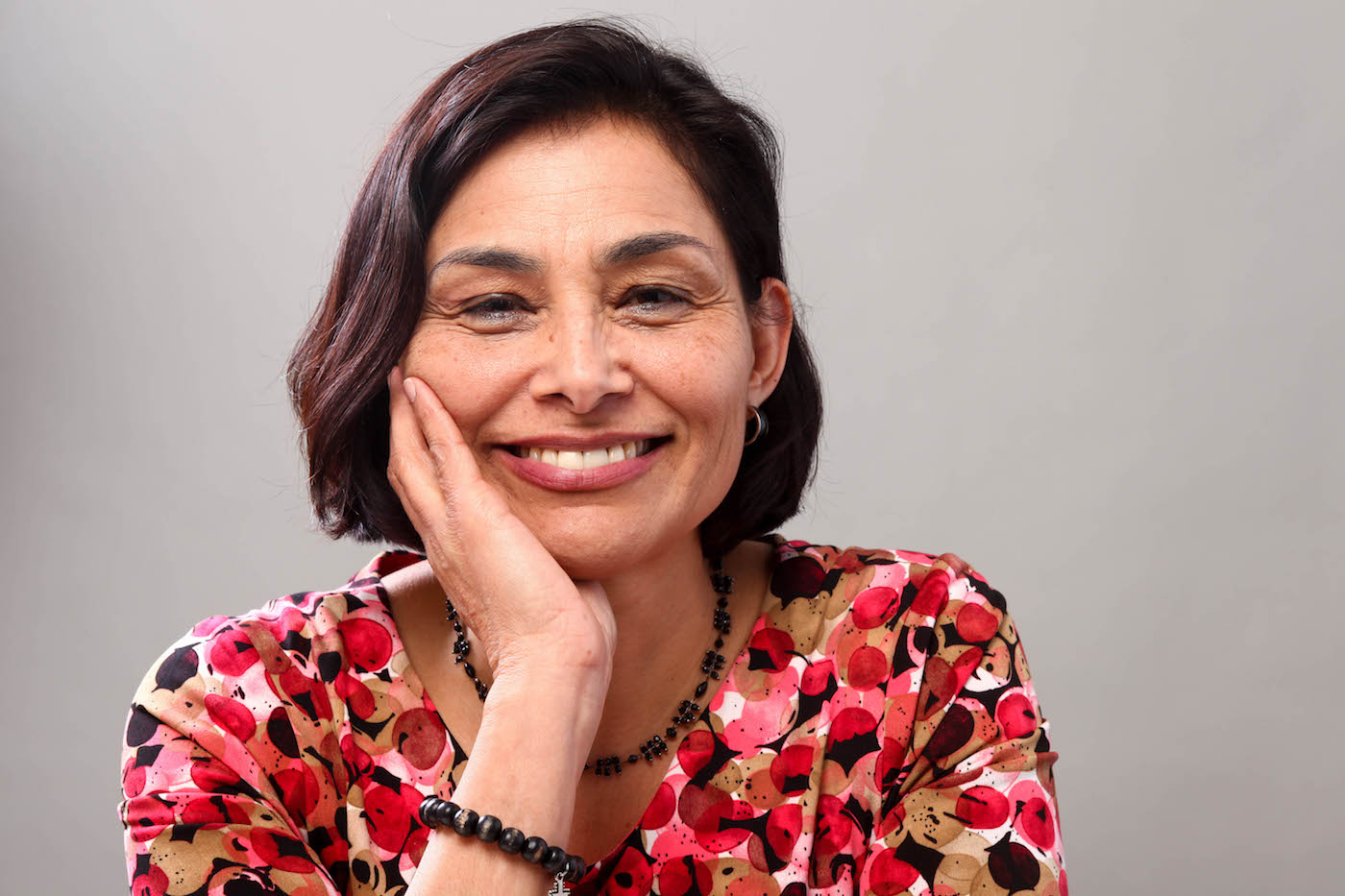 Juanita Perez Williams: “I am going to be a mayor that you’re going to see in the streets, in the trenches, talking to people, listening to people.” Michael Davis photo
Share
Tweet
Share
Share
Email
Comments

Juanita Perez Williams says she is the only candidate who will be a mayor for everyone, a claim based on a range of experiences: cultural, academic, administrative, legal, bureaucratic and military.

Her governmental experience has brought her in touch with some of the issues most candidates only talk about, having negotiated, as corporation counsel for the city, temporary closure of the Route 81 project, and a 10-year sales tax agreement with the county. An administrator and faculty member at Syracuse University, she was responsible for the student athlete discipline program. Somehow she finds time to shovel her own Strathmore sidewalks.

Born and raised in San Diego, Perez Williams’ grandparents migrated to this country from Guanajuato, Mexico. Although facing a constant struggle to make ends meet, her parents remained devoted activists in the farmworkers movement. She earned a BA from the University of California, San Diego, and a law degree from California Western.

After a five-year stint in the U.S. Navy, she and her family moved to upstate New York, she says, because they heard Syracuse was a good place to raise a family. If she wins the Democratic nomination and the election in November, as a Mexican-American, she maintains, she would be the only Latina mayor in New York state. 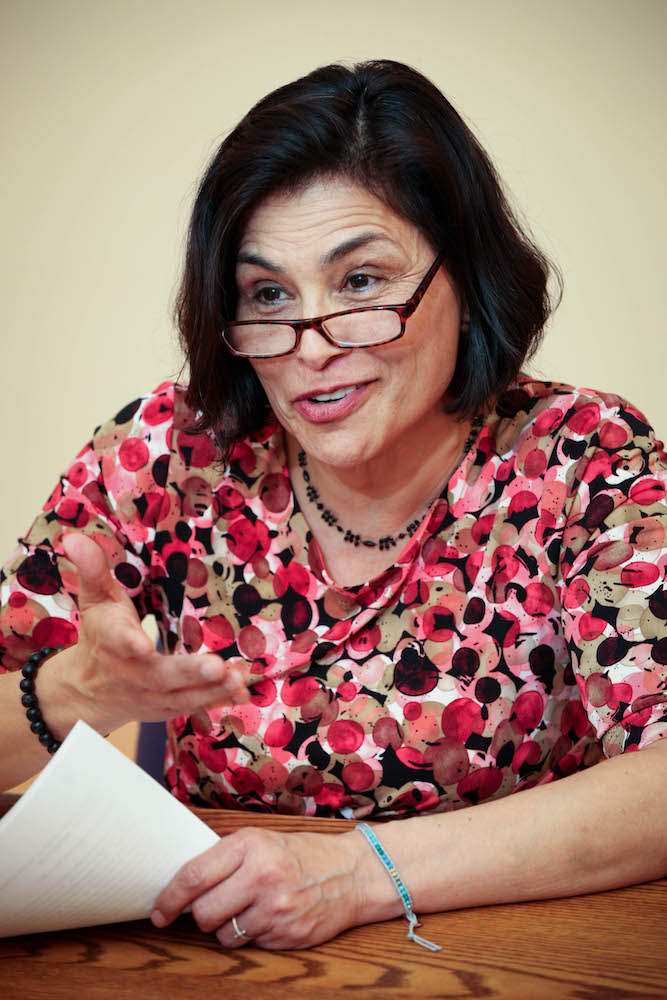 What is your job description for Syracuse mayor?

She needs to have demonstrated leadership to hit the ground running. I am a former lieutenant commander of the U.S. Navy and I have led naval individuals throughout a military career, where I was in a position to work with very diverse people, with challenging issues and crises, and I had to come up with solutions to implement them. I am the only military veteran in the race, and I can offer that demonstrated leadership to this city.

I also believe service to community is essential. I am the only candidate who has served my country, my state and my city. And by having that type of leadership — advising mayors, advising attorney generals, advising chancellors of universities — I have come to know what this next mayor must know. It’s that leadership is not top down, it’s service from the bottom up, being in the trenches, working with people and relating to them.

It’s also important for the next mayor to relate to the people of the city, and have an understanding of what they’re going through. I have a story of hardship that many of the candidates in the race don’t have. I too grew up in poverty. I am a beneficiary of Head Start, public assistance, free school lunches, college tuition paid for by government, and it was these kinds of benefits that taught me the importance of service, and also giving back to your community.

I live here in the city, in Strathmore. I own my own home. I do my own driveway, my sidewalks, mow my own lawn. I am committed to this city. I did it. I can relate to people and their issues. I’ve raised four children. I’m a grandmother. I want them all to be successful here in the city. So I have a vested interest.

But I’m about family life. I’m about neighborhood life. I feel this next mayor, she needs to know what this community is about, what is important to it. I’ve been engaged in many, many organizations. I am committed to helping veterans. I’ve worked in minority communities. I’ve helped co-found a minority chamber of commerce. I’m a union member. I know the many issues of the city that are important to its success. I think the next mayor must know what those particular roles are that are important to people here in the city.

I am all for plans that share resources and services. But I am not for a plan that has a focus on a governing body that’s a one-size-fits-all. It only benefits a few, and it doesn’t benefit the whole.

So the Consensus plan is the wrong plan. But I do believe there is opportunity for a plan. When I’m mayor, we’re going to sit down at the table and the city will lead the way on a plan that takes into consideration many of the recommendations brought to us by Consensus, but really has a focus on the city perspective.

But city life is complicated. It has many issues that are different from the suburbs. I would never, never agree to a plan that has a one-size-fits-all.

I think we need to be talking about countywide school systems. But there are many throughout the country that are not about merging students and having them go long distances to get an education. I believe in neighborhood schools. But I also believe in sharing services. Imagine students at Corcoran High School online listening to a biology professor from Fayetteville. We can do that.

We have opportunities now that are so different from the past that we could utilize to create a sharing of services, having teachers have understandings of city teaching and suburban teaching. There are opportunities to do that without mergers, without making people leave their communities. That’s what I’m for. 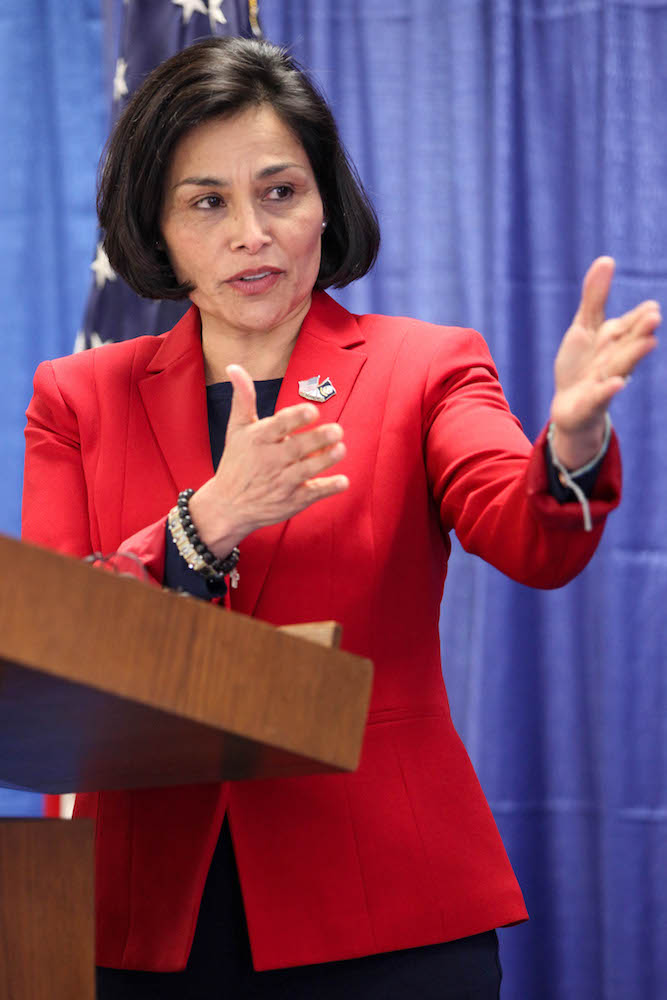 As a Mexican-American, Juanita Perez Williams would be the only Latina mayor in New York state. Michael Davis photo | Syracuse New Times

I said from the very beginning, it’s not about the design. It’s about what brings us, the city of Syracuse, the most revitalization in our neighborhoods, the most sustainability.

Now, from that, looking at all the options, doing my research, talking to people, clearly the street scenario is the best option thus far, or as others call it, the grid. You take that property under Route 81 right now, and you create a street scenario inlet into the city; you create $140 million, they say, in property value, and millions of dollars in tax revenue in that land development which could create a whole new urban core for the city. You would have retail, affordable housing, shopping, corner streets, opportunities for business. It could create a nice core for the city with revenue, and then start your creative place where people want to come visit, and want to be a part of.

But we’re a city, and right now city life is coming in in the morning on different pathways and this will be no different.

Well, city life needs to continue to focus on diversity. That’s what a city is. And people are coming into our city. That’s the new way of life, working in an area that’s near the city, living in the city, walking around, not driving. Beautification with gathering spaces, green spaces, shops, retail, affordable housing, mixed uses. That’s what people want in city life.

I think it’s fantastic that private development is contributing into our city, and I think government should leverage that. I think we should be a partnership where we’re creating opportunities for families to come into the city and enjoy it. So I think right now we’re on a good pathway, but we need to focus on the main streets throughout the city, having corridors from downtown to the main streets of the Jubilee Homes area, to the Kirk Park area, to the Near West Side, to the Valley. We need to create and sustain those communities, too, with jobs, industry, good housing.

We are a mecca of communities throughout the city, and I want to be a part of revitalizing all of it, in different ways that support those citizens in those parts of the city.

From day one a mayor can create hope. I will make dealing with poverty in our community the priority. I came from it, I understand it, and I know that it won’t define you if you don’t let it.

I am going to be a mayor that you’re going to see in the streets, in the trenches, talking to people, listening to people. And I’m going to move quickly, block by block, revitalizing our neighborhoods, creating jobs within the very streets where we need work, rebuilding our homes, creating community centers, dealing with our infrastructure.

The Land Bank is a great opportunity to put people to work. Not people from outside the city, but the people who live in these communities, to give us ideas on what we should do with these lots. What should we do with the dilapidated housing? I’ve heard hundreds of ideas that are great. We don’t listen to people. I’m someone who has lived in a neighborhood, that wasn’t listened to. So I know the answer is listening.

And that will be my job day one. Walking the streets. Listening to people. Listening to families. What are their needs? And then finding the very resources and creating them to rebuild. It’s all about rebuilding.

The current seven contenders for the Democratic mayoral nomination will get their first shot at each other May 11 when the party’s city and county committees meet to vote on a designee for the nod. According to party County Chair Mark English, it will take 50 percent of the votes plus one to garner the designation. The ballots will be submitted to auditors for the count, and if no one achieves that total, committee folk will return on May 13 for a second round of voting. If the magic number is not reached on the second round, the top two vote-getters will vie for the designation on a third.

Three of the candidates will be undeterred if they don’t get the designation. Alfonso Davis, Chris Fowler and Juanita Perez Williams all say they will simply move on to the second mayoral contention, a Sept. 12 primary. The others, however, say they are not looking that far ahead. “I think it would be wise,” Joe Nicoletti maintains, “to wait until after the designation to see where we’re at.”

Marty Masterpole has goals in mind that would indicate significant support and adequate funding to attempt a primary run. Andrew Maxwell reflects, “I have not made any decision and am not looking beyond the designation. I’m in this race to win.” And Raymond Blackwell threw his hat into the bursting-at-the-seams ring in mid-April.

English recalls an irony the last time there was a crowd of candidates and intense contention for the Democrats’ mayoral designation. In 2000, having gone through all the aforementioned procedure, Kate O’Connell won the designation. But Matt Driscoll, who had moved into the main seat in City Hall after Roy Bernardi resigned to take a job in Washington, D.C., won the primary.