Making his second visit to the 12th annual Syracuse International Film Festival, genre moviemaker Joe Lynch will screen Everly, starring Salma Hayek in a blood-soaked, claustrophobic shoot-em-up involving yakuza assassins. Lynch, 39, who filmed Everly during a 30-day shoot in Serbia, agreed with Hayek’s wish that “as long as the emotions are real,” the action thriller would be a positive experience.

The same positive vibes hold true for Lynch’s happy days as a student with Syracuse University’s College of Visual and Performing Arts from 1994 to 1998. Under the instruction of VPA honcho Owen Shapiro and other professors, Lynch helmed two student projects that went on to great acclaim. “He was my guy,” Lynch fondly recalls about Shapiro.

Also during his Salt City years, Lynch became fond of the frittatas served up at the Gem Diner, and during his senior year, he met his eventual wife Briana, an SU photography major who graduated from Cicero-North Syracuse High School. She wasn’t a fan of horror flicks, however, so Lynch showed her a video of George Romero’s 1979 gore epic Dawn of the Dead “as a litmus test; if she could sit through it, we could date.” The couple now have two sons, and Lynch makes frequent trips back to Syracuse to visit the in-laws. 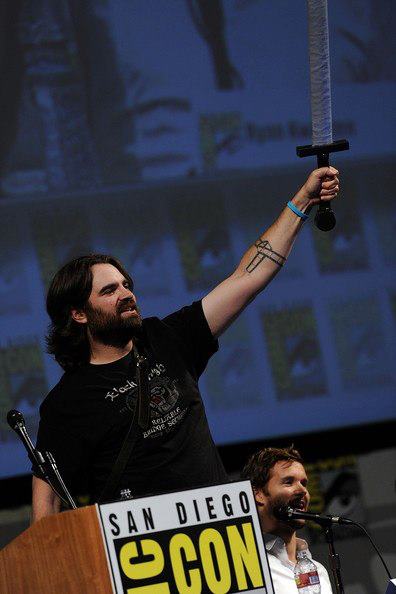 Here’s Lynch, in his own words, as he describes his SU education, starting with his junior film mAHARBRA (1996), which he labels, with tongue in cheek, as “light family fare.”

“It was based on a true story about a father who believed he had this religious disease and that God told him to kill his kid, so he took him out on a ‘camping trip’ and he drove down the road and he had this freakout and pulled to the side of the road and chopped his kid’s head off. And this really happened.

“We shot this around Cortland, right outside Ithaca. We didn’t want to be anywhere near Syracuse to shoot this. And three days later after we shot this, a guy kidnapped two teenage girls, chopped them up, put them in plastic bags and distributed the body parts from Cortland to Pennsylvania.

“A month later, I had to go back to get another shot of the point-of-view of a motorist as it was happening, and everybody was off of Route 81. It was around Sunday morning at 9:45 a.m. I was the camera guy, the director of photography was driving, and there was an actor with an ax and an 11-year-old kid with a plastic bag over his head. We’re just about to shoot and four or five cop cars pull into our shot and say, ‘What the hell are you doing?’ I jump out of the car and hold up the camera and say, ‘Sir, sir, we’re just trying to get a shot!’ I talked to the sheriff months ago about allowing me to shoot there, so he knew what was going on, but I guess he didn’t expect we’d be back.

“So he took me to the side and said, ‘OK, I can’t have you here right now, because the family of the two girls are going to be driving down this road in about 10 minutes and going to church. The last thing that they need to see is this.’ I’m like, ‘We’re outta here, we’re gone,’ and we got the shot at another time.

“So mARBARA and my senior film hiBeams went to the Sundance Film Festival and got me named Filmmaker of the Year at the Village Voice in 1998, so it was definitely a confidence booster. So those were just my two little scrappy films that I made at Syracuse University. If I went to any other film school, I probably would have not even made those shorts.

“The thing I love about Syracuse is that their program is designed to give the burgeoning filmmaker the ability to actually go out there and make mistakes. I was looking at the curriculums at New York University, UCLA and Columbia and it was almost like a lottery system. There were so many people in the classes and everyone had to write a script. Out of that plethora of scripts, only three or four were picked. There’s a good chance that if you’re not a good writer, but you could be an amazing director, your script might not get picked and you might not direct a film. And you might go into 50 grand in debt with student loans and you don’t even walk away with anything. 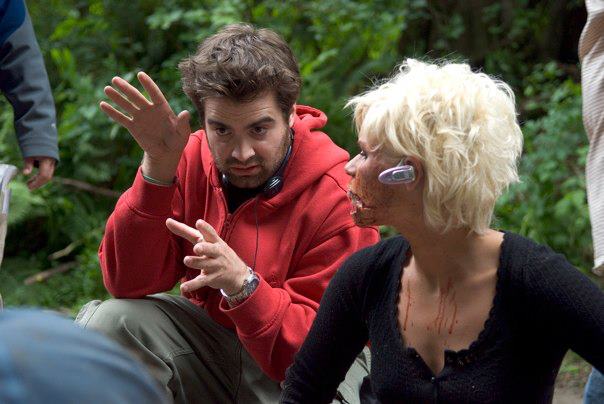 “At Syracuse, they say, ‘Here’s the camera, you buy the film, we’ll tell you how much it sucks, and you learn from it and you go out and make another one.’ That was invaluable to me; I thought the program that Owen Shapiro set up was such a progressive way of getting out there because every student who graduated from my class — and I’m sure every class before and after me — got to walk away with content, with the stories that they made. And not many film schools do that. Now, because you can shoot digital with an iPhone, anyone can shoot whatever they want and bring it in to class, but back then, film costed a lot of money and the equipment was hard to get. I lived in Long Island and it was nuts to go into New York City to get equipment to shoot something. So I said, ‘You know, I can go to Syracuse and use their equipment and I can go to a class and watch movies.’

“One teacher named Paul Zinder did a semester on horror films, and dude, you could not have seen a happier student than me. I never saw The Cabinet of Dr. Caligari before that class. And we were watching Rosemary’s Baby, The Texas Chainsaw Massacre, The Exorcist, Candyman and explicating them as cinema. SU provided the greatest way for falling into the industry because I got to walk away with films, and those films got me my first job. My first writing gig was for Troma, the guys who made the Toxic Avenger movies. Lloyd Kaufman, who runs Troma, watched my student shorts and was blown away. He said, ‘I can’t pay you anything, but I would love for you to write for us.’ That was a dream come true, and I couldn’t have done it without Syracuse University.

“The thing that is so hard for burgeoning filmmakers is to say that they have made something, that you were on the set, directed the actors, you told the cameraman where to put the camera to orchestrate a story being told. I’ve met so people that went to NYU and Columbia and other film schools, and they say, ‘I learned how to be a really good key grip,’ and, ‘I learned how to be a script supervisor, but I can’t say I’ve ever directed anything.’ And I say, ‘Then why did you go to film school?’

“But you gotta pay your dues; it doesn’t come easy. I’ve had the hard days where it seems hopeless and you want to give up. But you can never give up. If you quit now, you’ll never get that experience to show something that can affect people.”

Joe Lynch will host a question-answer session following the screening of Everly on Friday, Oct. 16, 9:15 p.m., at Eastwood’s Palace Theatre, 2384 James St. Admission is $10 for adults, $8 for students and seniors. An $18 “EVILning with Joe Lynch special” also features the 11:30 p.m. screening of the 1988 sci-fi thriller The Blob, presented in a rare 35mm print, plus other surprises.[snt]