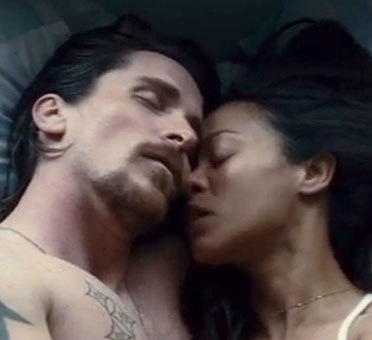 What would you do if before you took your next step, you’d be forced to make the ultimate decision of right vs. wrong, good vs. evil, should vs. shouldn’t.

“Out of the Furnace” puts that heavy burden on the shoulders of Russell Baze, a man who grew up with the gradual decay of a Pennsylvania steel mill town, a place where doing well becomes harder and harder each day.

The gripping story, directed by Scott Cooper and co-written by Cooper and Brad Inglesby, allows Christian Bale to display quiet cool with a passion that’s always bubbling not too far underneath in Baze, who followed his father’s path at that steel mill. He’s got a beautiful girlfriend (Zoe Saldana) who wants him to take one more step toward forever, and a younger brother, Rodney, who while at home, can’t shake off the things he’s seen after repeated stop-loss callbacks to Iraq from Uncle Sam.

Then one night, after another attempt to help Rodney, Russell wallops another car to an awful result. He’s sent to jail.

When he gets out, the moral compass starts pointing in various directions.

Wonderfully played with the right portions of physical passion and emotional ambivalence by Casey Affleck, younger brother Rodney talks the town bookie into setting up a bare-knuckles venture in the Ramapo Mountains, of New Jersey. The bookie, played with a certain measure of grizzled reluctance by Willem Dafoe, repeatedly warns Rodney about the wicked heart of the Jersey ringleader. And for sure, played with a menacing zeal by Woody Harrelson, bad this guy is to the core.

Older brother Russell, despite the counseling from the town police chief, played with proper reserved resignation by Forest Whitaker—who, by the way, happened to win over the heart of Russell’s girl while he was in jail—can’t let things go. The dark story marches onward toward the crucial moment and inevitable climax, when Russell has to make the choice that will forever mark the rest of his days. Both sides have made good argument. Well done.

Into the Fire: Film puts characters in cauldron of tough choices