Is Indiana the gayest state in the Union?

Homophobes always make me suspicious that they’re gay. Don’t misunderstand. I don’t mean to imply that every black-hearted gay basher sneaks off to Bear Week in Provincetown or secretly knows the Cole Porter songbook by heart.

But why would anyone obsess about someone else’s sexual orientation—or anything else, for that matter—if he didn’t find it deeply compelling? If Fred has season tickets to the New York Yankees, appears constantly in New York Yankees attire and can recite the WAR (Wins Above Replacement) of every Yankee living and dead, isn’t it weird if he insists that he hates baseball?

Using that theory, I’ve been grappling with a double-barreled question: Can an entire state be secretly gay? And, if so, is Indiana the gayest state in the Union?

As national outrage—reflected in part by Syracuse banning travel to Indiana for city employees—humbled the Hoosier State into softening an anti-gay law, I spent last week researching the ins and outs, if you will, of gay subtexts embedded in the state’s history and culture.

Jackpot! Strip away the veneer of hypocrisy, and Indiana makes Provincetown look like a Southern Baptist convention.

Hoosiers: More sweaty boys in shorts, and locker room scenes to boot. And two coaches, both men, played by Gene Hackman and Dennis Hopper, who share an inseparable bond, regardless of what the townsfolk whisper. Swish!

In and Out: At his Academy Award acceptance speech for Best Actor, Cameron (Matt Dillon) praises his former high school teacher, Howard (Kevin Kline), and then outs him, announcing “and he’s gay!” It’s set in the fictional town of Greenleaf, Ind. My only quibble is that the film wasn’t set in totally gay-sounding French Lick, Rocky Ripple, South Bend or Santa Claus, which is named after a dominant elf who sports a red plushie suit and orders submissive elves to make toys. Nothing gay about that, right? 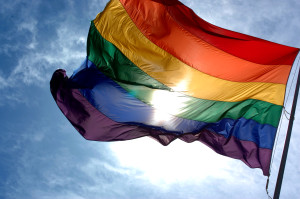 Gay touchstones, if you will, abound in Indiana. For The Music Man, composer Meredith Willson wrote the iconic song “Gary, Indiana.” There now exists a parody song, “Fairy, Indiana,” that celebrates gay marriage. The musical/movie features an all-boy marching band festooned in tassels and shiny buttons. The main character has a librarian for a beard. Did I mention those 76 tromboners? Oops. I’m so sorry. That was a typo.

At what point does Indiana fess up to its gayness? Probably never, but that won’t change the reality. One of its most famous bars is the Slippery Noodle. Orville Wright, suspected of being gay, spent his formative years in Richmond. There’s no evidence that popcorn mogul Orville Redenbacher (what’s with all the Orvilles, anyway?) was gay, but he seemed determined to look the part.

The unofficial state food is the corn dog. Hmmm. Barely closeted Cole Porter was born in Peru, Ind. The world’s only superhero museum is in Elkhart. An online review states: “A Batpole descends from the floor above. Visitors are kept off the Batpole by insurance restrictions, but Allan happily slid down for us.” I bet he did.

Alexandria boasts the world’s largest ball of paint, approximately two tons and still growing as visitors apply countless layers of paint. “Mike’s willingness to share his ball with others has moved him to promote it as a hands-on tourist attraction,” RoadsideAmerica.com informs us. Hard as it is to resist the tug of Mike’s colorful ball, do call ahead if you go.

Speaking of balls, I’ll close where I began—with baseball. Republican Phillip Hinkle—rhymes with winkle—was once an anti-gay-marriage Indiana state representative. Then, in 2011, he admitted to paying an 18-year-old man he met through Craigslist for “a good time.” The lawmaker insisted that the two just talked about baseball. The kid claimed Hinkle grabbed his ass.

You’re up, Indiana. In baseball and in life, you can’t win if you always hit for the visiting team.