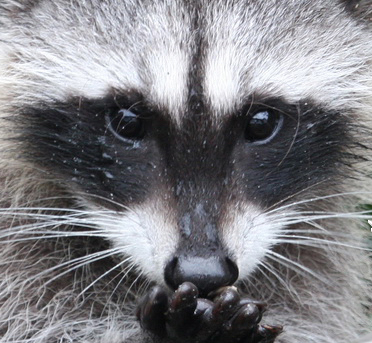 No seagulls were harmed at the Battle of Oswego.

If anyone was paying attention to my Twitter feed the other night (my tweets have been fewer lately due to not wanting to stare at any kind of screen for too long), there was a mention of raccoon babies hanging out around the Franklin Square area. Oh, boy, were they adorable, and their cuteness was evident enough to entice my taking picture of the the critters. As I approached, cautiously, there was a second hanging out by the fence. Why not get both of them in the picture, right? Brilliant!

My phone’s camera was specifically angled to fit the two babies in the frame when a rustle from the foliage behind me generated panic to see the mother hanging out. In the fashion of good ol’ Snagglepuss, I exit-stage-left. There was no reason for me to give the gigantic rodents more time to initiate their potentially rabies-driven attack. Fortunately, my cartoon run out of there proved my leaving unscathed. Unfortunately, in regard to another animal attack, the results were less than pleasing …

Years ago, a group of people in the Central New York area residents decided to form a group to beat the winter blues, forming a group called Hot Chocolate Kids Club (HCKC). This group of adults, who (some of them) had children of their own, banded together to meet up on a regular basis to local hot spots to consume hot chocolate. Like all good things, the group evolved, broadening its mantra to incorporate summer months; since hot chocolate isn’t the best thing to consume during a hot summer night or day, ice cream fit the slot perfectly, melting its sugary deliciousness into the void. So, the Ice Cream Kids Club (ICKC) was born. Since last summer, I’ve been grateful to have been adopted into the group, which has expanded since. 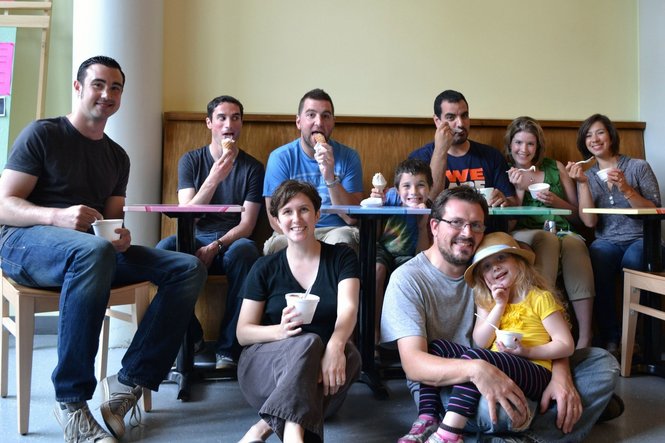 We branched out yesterday and three of us headed to Oswego to meet up with other members that would not normally make it to Syracuse on a regular basis. The plan of attack was to take a lovely stroll around the city before hitting up Rudy’s for lunch, and Bev’s Dairy Treat for ice cream. The last time my feet walked around Oswego was a handful of years ago when a college buddy of mine and I hit the SUNY campus to learn more about their secondary education master’s degree program.  Yes, at one point I wanted to be a teacher; the desire faded away, returned again, but then dissolved. Due to opportunity craziness in these parts, it has returned in a sense. 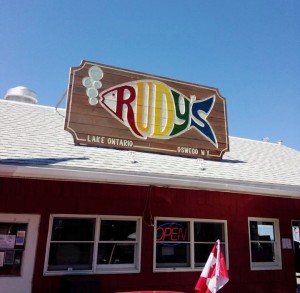 So we walked around town, where streets were blocked off for an classic car gathering. The classic automobiles are appreciated despite my not knowing much about them; however, this is why you talk to the owners, because they possess that knowledge that leaves you elated for asking, learning, and simply conversing.

Every good road trip deserves a soundtrack. It’s important. Audio books and podcasts count. Why the hell would I put the kibosh on a good story? Being in the car with Stef and Frank (both pictured in the ICKC picture above) only meant good music was going to be played. Both of these kids are affiliated with the Syracuse Improv Collective (Frank is really friggin’ good at improv, but he has yet to hit the stage) and notorious karaoke dynamos. Stef also creates fresh beats in a local band, Mavinas. However, aside having a strong distaste for karaoke, my fingers will strum the guitar on occasion.

After a discussion about road trip music, we agreed that accompanying music should dance around the five-minute mark and contain good riffs, catchy choruses, and breakdowns to keep the intrigue of a longer song going. Paul Weller’s song below really captured stood out to me. I agreed with Frank that The Doors “L.A. Woman” is a clutch road trip song, he agreed with my preference of blues music, but here is what we had going through the speakers:

Tears for Fears: “Head Over Heels”

Of course, after all, the beginning of a horror movie wouldn’t be complete without the main characters embarking on a road trip …

With regard to my animal whispering capabilities, some animals love me, and these animals are the more domesticated ones. In regard to the wild ones, there is an intimidation factor.  There are signs in Rudy’s that explains that seagulls are essentially rats with wings. If their red, beady eyes aren’t a tell, then their garbage eating might be. Simply: don’t feed them. Of course, there are people to inevitably ruin things for everyone else.  So the seagulls will stick around.

This is why we cannot have nice things.

Our lunch was going well. We talked about how happy we are to be living in the area that has salt potatoes. The birds were, thankfully, not intimidating. The haddock sandwich ordered wasn’t to my liking: it was essentially dry cardboard, a seasoned and larger version of a communion wafer. Seeing everyone else’s plates, more food was needed for my belly, so I went to order sides (room was needed for ice cream, save that notion). Of course, this is when hell broke loose.

In horror movies or thrillers, the person who ops to go off by themselves usually gets a machete through their torso — the least of one’s worries, to be honest. Fortunately, for me, my trip left me untainted. However, my stature must have intimidated the demon birds, and my leaving gave them an opportunity that they took full advantage of.

From what I gathered:

How the seagulls attacked was in similar fashion to the Velociraptor pack in Jurassic Park.  Poor Muldoon; our Aussie hero didn’t see it coming. (Actually he did, but he was too late to react. His getting devoured was the result of a rookie mistake … and blatant foreshadowing, mind you.) This proves some truth that the Velociraptor and bird correlation (evolution) has truth behind it.

The gulls sent out a distraction. The decoy landed near the group of five and smiled deviously at them. In case of any false moves, John was ready to punch one in the face, because sometimes force is necessary. Cats need a spritz of water; gulls need a fist. Tim was ready to protect his potatoes. (The food, folks, so get your mind out of the gutter; however, I would not put it past him since seagulls are cunning.)

Upon my returning with my fried zucchini and Byrne Dairy Chocolate Milk, the table was upturned and the top of the pavilion was on fire. Leah was missing! At first, it was thought that those bastards took her. It was reported that the birds had almost scooped her up and carried her away; John pointed her out a route as he fought the birds, so she could run to safety as she screamed. Tim’s hat was torn to shreds, but he held a fistful of feathers.  A scar from a gull claw was found in Scarface fashion on Frank’s face; he continued to eat his fried crab bits. Stef’s hair was tussled after one’s landing on her head sent her spinning. A gull did successfully take one of Stef’s fried scallops before taking off to Canada.

A video was taken of action, the Birdemic.

Also, a brave bystander took a picture of Stef’s dilemma: 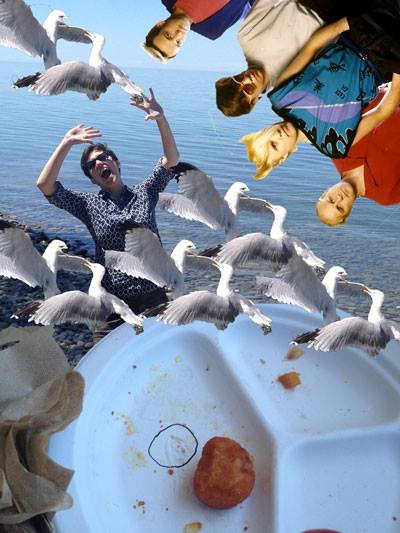 As you can see in the above picture, the seagulls went berserk. Stef’s dismay is of sheer terror as she tossed the plate with the remaining scallop in the photographer’s direction. Also, if you look closely, you can see the band, A Flock of Seagulls, in the background. Apparently, the one-hit-wonder is still up to no good, bitter after  their short span.

To celebrate the victory, we walked to Bev’s and got some ice cream.

No seagulls were harmed — or punched in the face — at the Battle of Oswego.

#takeatour of Franklin Square
Maxed Out
To Top