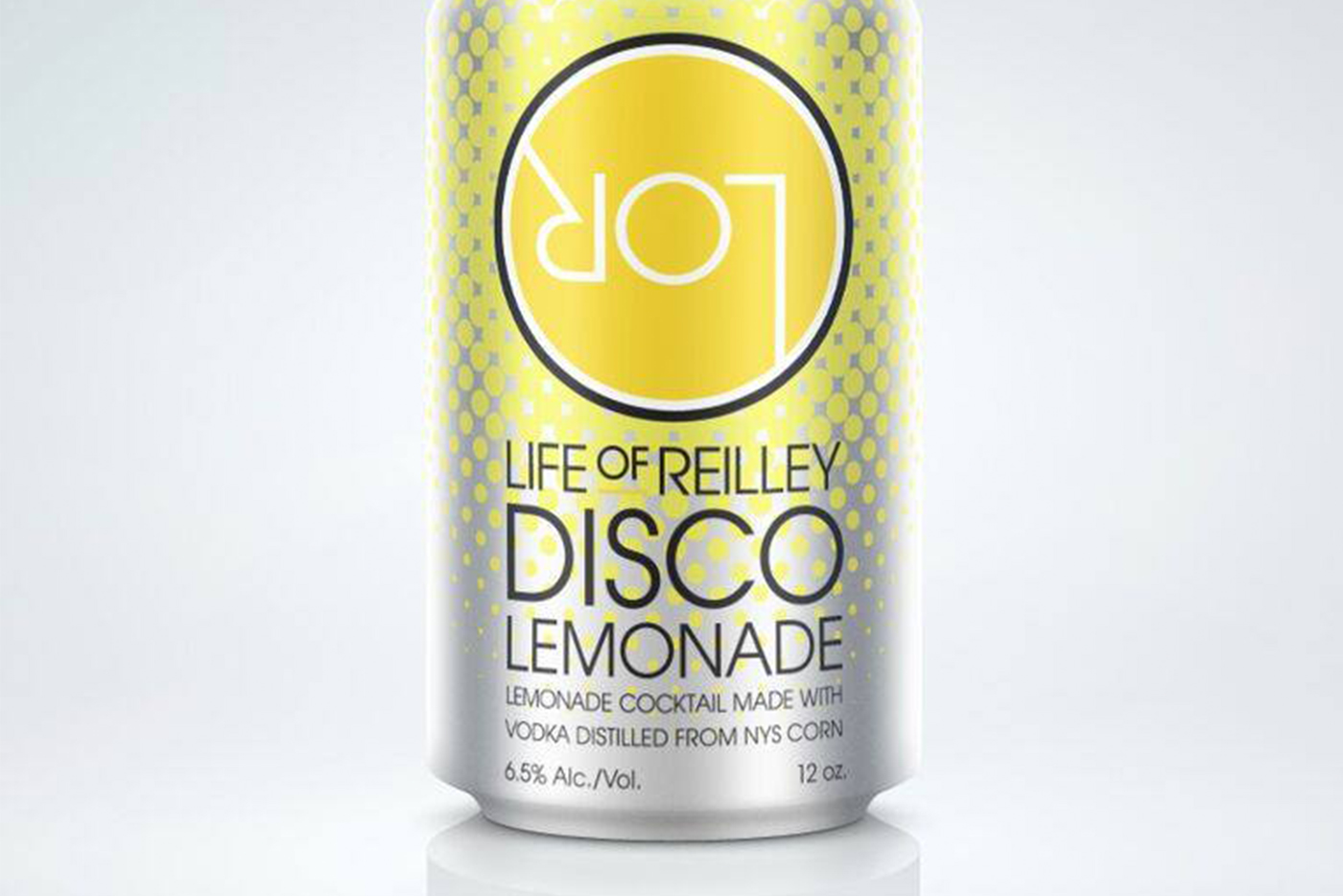 Life of Reilley’s Disco Lemonade is heading to liquor stores and bars.

Do you like the convenience of Lime-A-Rita (Margarita-flavored beer) and Mike’s Hard Lemonade (malt beverage)? Is vodka your spirit of choice? And do you like to drink local?

Then you’re going to love Disco Lemonade, a pre-mixed craft cocktail in a can produced by Cazenovia-based Life of Reilley Distilling and Wine Co.

Disco Lemonade is made with Life of Reilley’s premium raspberry vodka, fresh-squeezed lemonade and fresh organic mint, grown at Spruce Ridge Landscape and Garden Center in Nelson. It’s the first pre-mixed canned cocktail produced by a New York state farm distillery (it’s distilled from New York corn). It debuted in July and has been a hot seller on Saturdays at the Cazenovia Farmers Market during this sweltering summer.

After Sept. 1, Disco Lemonade should be available in liquor stores and bars across New York state. Because it’s made with vodka, it can’t be sold in supermarkets.

Success with the slightly tart cocktail is sweet for Ben and his wife, Shioban: It took two years for them to get the canned version of their signature party libation to market. The road was long and bumpy, and they encountered many state and federal regulatory questions and issues along the way, but the Reilleys were not deterred. They are learning as they go and thrilled with the enthusiastic response from both consumers and support from the craft beverage-making community.

Last week, they made 1,800 gallons of Disco Lemonade, or enough for about 800 cases, Ben Reilley says. The new batch was canned at 1911 Spirits in LaFayette and will reach customers quickly.

At the New York State Fair, which opens Thursday, Aug. 25, Disco Lemonade will be one of the made-in-New York bar offerings at the Empire Room, joining local beer, wine, hard cider and spirits. The Empire Room is the only full-service restaurant at the State Fair. It has a New York-focused food menu, a patio with a Bloody Mary bar and also happens to be air conditioned. Relax for a spell and cool off with a Disco Lemonade.

On Aug. 30, 3 to 6 p.m., Reilley notes that there will be a “Disco Takeover” at the Empire Room, with disc jockeys spinning boogie-fever music and Disco Lemonade flowing prior to the 8 p.m. show by The Commodores at Chevy Court. The next day, Reilley says, they will be pouring and selling at the Saratoga Raceway.

“It took so long,” Reilley says about Disco Lemonade, “but it has really caught fire.”

For more information on Life of Reilley and Disco Lemonade, call 506-5084 and visit facebook.com/LifeOfReilley and lifeofreilley.net.

1911 Spirits, the folks who take apples from the tree to the bottle for a lineup of hard ciders and premium, small-batch spirits, have several new offerings. All products are made with estate-grown apples from Beak & Skiff Apple Orchards in LaFayette.

For the hop heads: 1911 IPC Hard Cider is a “hop forward” with of East and West Coast hops. It’s available in six-packs.

Not too tart, not too sweet: Grapefruit Hard Cider is a semidry, sparkling hard cider made with Macintosh, Gala and Honeycrisp apples and infused with California grapefruit juice. The zing of grapefruit makes it a refreshing alternative for these hot summer days. It’s also available in six-packs.

The new offerings join 1911’s existing lineup of hard ciders available by the six-pack, including 1911 Original (also available in cans), 1911 Raspberry and 1911 Blueberry. Look for them in groceries and convenience stores. Four varieties of Founders Reserve hard ciders (Sweet Apple, Rose, Hopped and Heritage Dry) are available in 375-ml screw-top bottles and available in liquor stores. The Rose is a blend of apple cider and locally grown Noiret and Chancellor grapes, which give it a light blush and fruity flavor.

Meanwhile, the newest spirit from 1911 Spirits is Vanilla Chai Vodka. The vodka has subtle hints of vanilla and warming spices.

For more information, go to 1911spirits.com.