On Mikiko Suzuki MacAdams’ eye-popping set, there’s a wall, transparent to us, that cordons off a third of stage left. On one side lies the domestic, with chandeliers, pianos and babies. The door to the next room is usually locked, and beyond it is the male-directed science realm designed for the treatment of ailing women.

Often action takes place on both sides of the wall simultaneously, words from one scene conflicting with its parallel a few feet away, a reliable device as old as Roman comedy. Director May Adrales, fondly remembered for last year’s Chinglish, is especially adept at exploiting space, both narrow and wide. 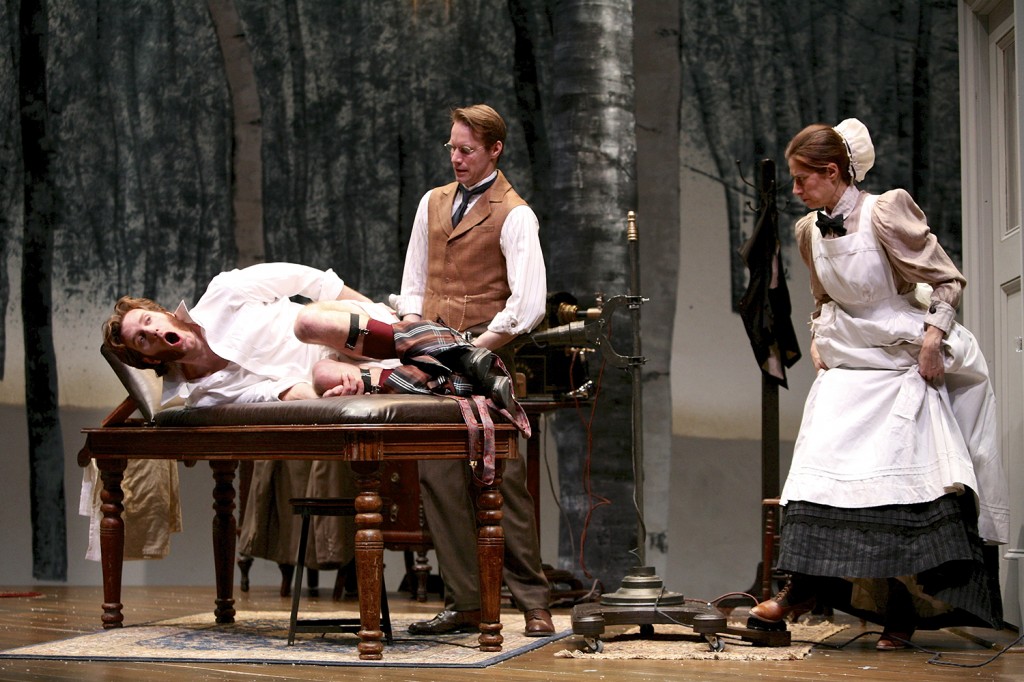 While the putative theme is female sexuality, once called “hysteria” (really), Ruhl’s ultimate goal is farther reaching. True, some of the men do talk like creatures out of vintage Virginia Slims ads, and they are laughable as well as bigoted (“Better a Negro Protestant than an Irish Catholic”). Ruhl, one of the nation’s brightest playwrights, is refuting the stale canard than feminists don’t have a sense of humor. As with David Mamet’s Oleanna, admittedly, some men will react differently to In the Next Room than women do and may even feel they’ve seen a different comedy.

The setting is the 1880s in a northern spa, perhaps Saratoga Springs, as snow falls frequently on a birch forest outside. Young mother Catherine (Marianna McClellan) is holding an infant in her arms and lamenting that her breasts to not produce enough milk to nurse. Childlike and capricious, Catherine evokes Nora Helmer of Ibsen’s A Doll’s House, a play set about the same period. Her husband, Dr. Givings (Christopher Kelly), frequently interrupts her, preoccupied with more important things. He’s not a reactionary, however, but an enlightened scientist devoted to women’s health.

We learn what he is about when his first patient arrives, a treatment Catherine is forbidden to observe. Top-hatted Mr. Daldry (Brian Keane) brings his listless, weepy wife Sabrina (Kate MacCluggage), hoping to break her out of a debilitating funk. Dr. Givings discreetly turns his back when he asks Sabrina to disrobe, down to a shift and bloomers. The presence of dour-looking assistant Annie (Lena Kaminsky) assures propriety.

Sabrina then reclines on a bed covered with an opaque sheet while Givings applies a dark, buzzing piece of equipment to the appropriate spot. The thing looks like farming equipment, but it works. Sabrina is all chirpy and rosy-cheeked now. At her entrance we did not notice that MacCluggage’s Sabrina is drop-dead gorgeous, abundantly evident now. 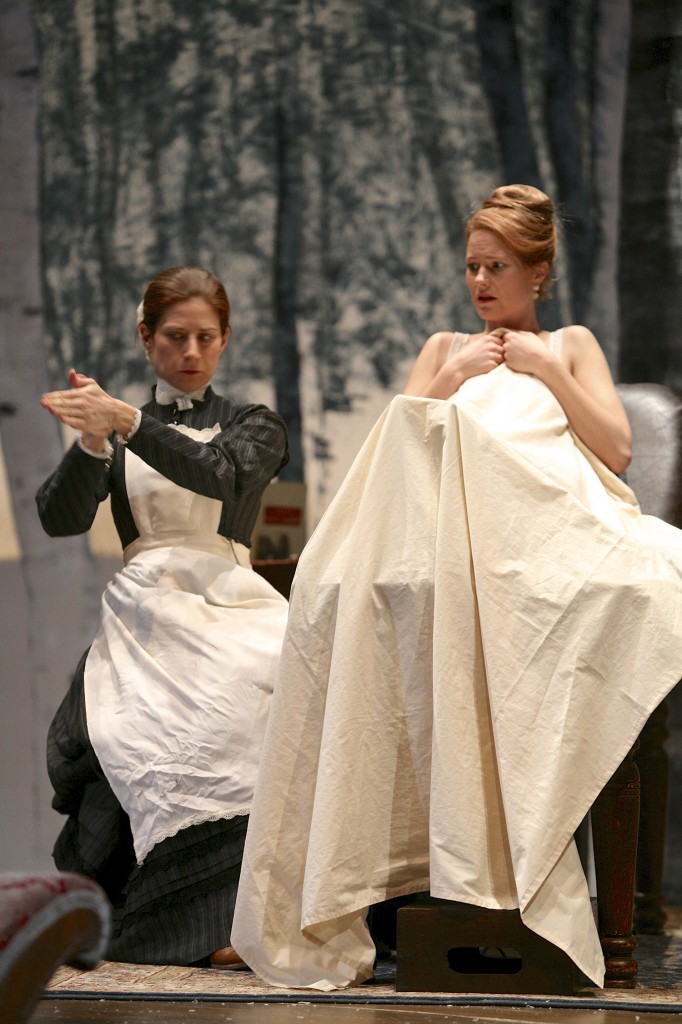 As bizarre and titillating as this may sound (think of Meg Ryan in When Harry Met Sally 110 years later), playwright Ruhl has done her homework. The impetus for In the Next Room comes from Cornell professor Rachel P. Maines’ The Technology of Orgasm (2001). Such vibrators were indeed among the first appliances to run on electricity soon after delivery lines were in place, and the move for this dubious “cure” centered on Saratoga. The female orgasm, however, once thought as chimerical as the unicorn, would not be studied scientifically for another seven decades.

Which leads to Ruhl’s most serious point: Neither female nor male orgasm exists to beat the blahs but rather as an expression of the profoundest feelings between people.

To get the answer to Prince Charles’ infamous quip, “Whatever love is,” Ruhl introduces two important supporting players. European painter Leo (Mark Junek) embodies every romantic notion from Lord Byron on. And plain-spoken African-American wet nurse Elizabeth (Krystel Lucas), who though grieving the death of her child, is happily married and, ahem, satisfied.

Every cast member is wonderfully accomplished, but Marianna McClellan as Catherine travels the longest arc when she breaks into the next room. As her husband, Christopher Kelly smashes cliché and makes a significant sacrifice for authenticity.

Sarah Cubbage’s costumes, Nathan A. Roberts and Charles Coes’ sound and music, and Seth Reiser’s lighting design produce a feast for eye and ear. They make us love onstage snow even in February.