Though the story is problematic at best, the production is something to be seen.

As the moon rose over the Central New York drumlins on Saturday, excitement mounted in Palmyra for the annual Hill Cumorah Pageant. The 75-minute theatrical spectacle, in its 77th year, tells the story of the Church of Jesus Christ of Latter-Day Saints (LDS).

Attendees assembled as early as 5 p.m. to reserve chairs or enjoy picnic dinners on the lawn. Children played tag,  and teenagers played Frisbee, while Mormon spirituals were broadcast over the loudspeakers.

Backstage, cast members in period costumes were outfitted with wigs and beards. Others put finishing touches on handmade props or practiced the dance and fighting routines they’d learned during the 12-hour daily rehearsals they’d attended since arriving last weekend in Central New York. Nearby, the 28-man work crew was harnessed and rigged to ascend the 12 light towers that framed the stage.

Shortly after 9 p.m., the crowd began to settle, and the cast members found their marks. The play, officially titled America’s Witness for Christ, begins 600 years before the birth of Jesus, when the Prophet Lehi tells the people of Jerusalem that they must repent or their city will be destroyed. Based on the Book of Mormon, the story tells of the cycles of corruption and redemption that Lehi’s descendants endured from A.D. 471 through the early 19th century. 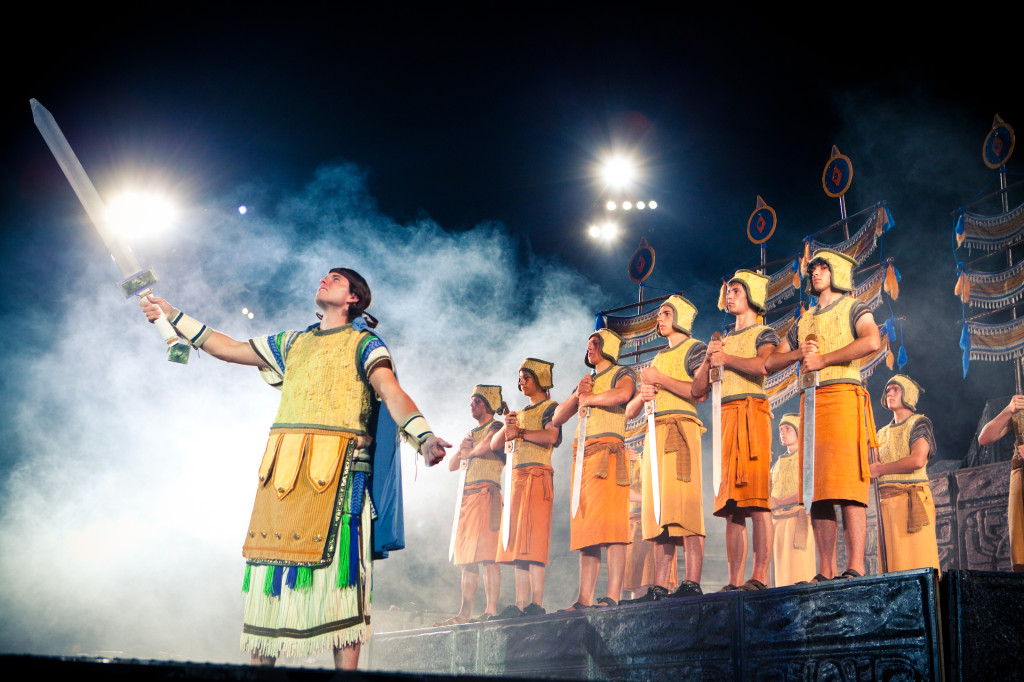 The play’s author, Orson Scott Card, is a science fiction writer (Ender’s Game) and great-great-grandson of Mormon leader Brigham Young. His script, written in the 1980s, is as trite and boring as one might expect from a work designed to proselytize. It is repetitive and flat, and sends a decidedly anti-Semitic message: “Wicked Jews” was a phrase thrown about throughout the evening.

With the help of vaguely descriptive period costuming, the show also ignores the history of the Haudenosaunee Native Americans in the area. A man in a headdress and a long, dark braided wig accepts the golden plates from the prophet, vowing to pass the truth of Jesus Christ on to future Americans. Huh?

Though the story is problematic at best, the production is something to be seen. The effect of an enormous cast pantomiming to a recorded script, underscored by a recording of the Mormon Tabernacle Choir and the Utah Symphony, is further accented by pyrotechnics and water effects. If you can set the dubious content aside, it’s easy to be taken in by the drama of it all. 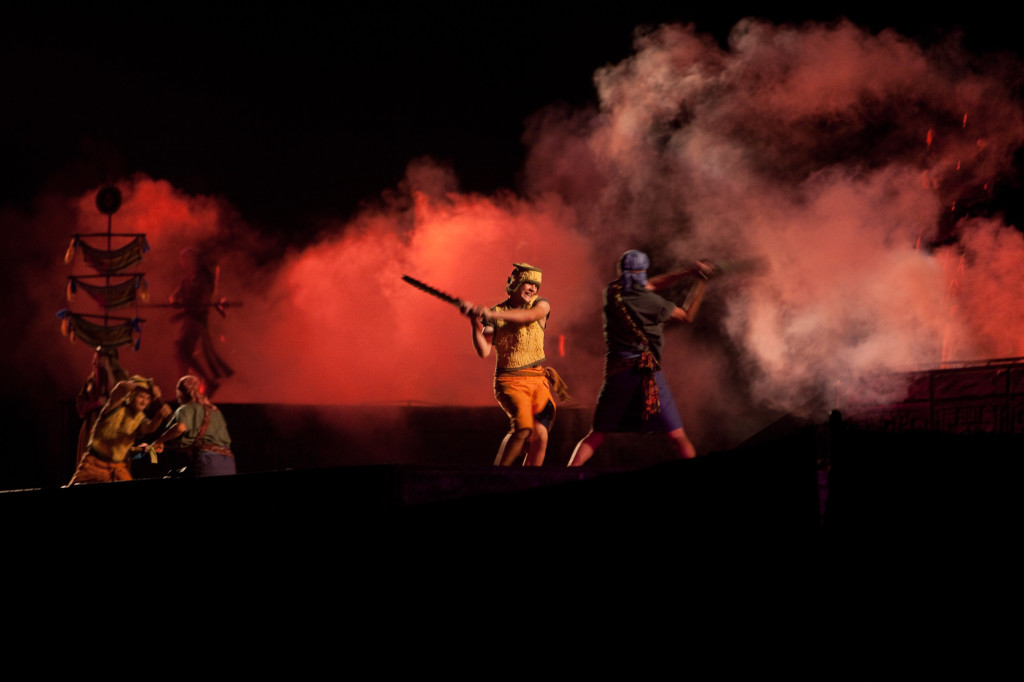 It’s clear that the LDS crew has been doing this for a long time, though that is both a strength and a crutch. The well-oiled-machine effect was tempered by a pall of stagnation.

It would have been nice to see the extraordinary Mormon Tabernacle Choir and the Utah Symphony live. Since this is the only production of this particular story performed each year, it’s hard to imagine why they don’t come to this sacred place to join the celebration. Surely the production would be more difficult to pull off with a live orchestra and voice-amplified actors, but the gain in authenticity would be worth it.

Rebecca Seehootoorah, 25, came from Kent, England to dance in the pageant.

“To think that something written in scripture took place right here, on this very hill,” she said, pausing to lay a hand on the leather-bound Book of Mormon she and other cast members carried as they mingled with the audience, “testifying” to guests throughout the early-assembled crowd. “I just knew I had to be here.”

Seehootoorah is one of 750 LDS member-performers who traveled from all over the world (mostly from the United States, many from Utah) for the pageant. Cast members pay for their own travel, accommodations and food while they are in town, in addition to paying a fee to participate, which helps offset production costs.

Overall, the sense of community, friendliness and general good will is palpable … well, unless you’re Jewish. But if you’re curious about the tenets of the Mormon faith and you’re looking for some free outdoor entertainment, you could do a lot worse than the Hill Cumorah Pageant. Bring some bug spray and a few bucks for popcorn, and take it all in. You won’t experience anything else quite like it in Central New York.