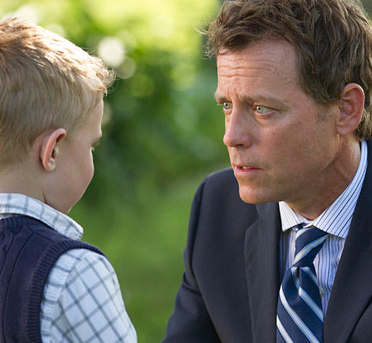 Of course a movie should not sway something as significant as whether or not you believe in an afterlife.

But “Heaven Is for Real” sure does a great job of laying out serious issues and presenting enough important complexities in the issue to keep you thinking throughout.

The movie, taken from the real-life book by Nebraska reverend Todd Burpo, was the ideal choice for a reflective Easter matinee at Destiny USA. The couple dozen patrons sat quietly and raptly as the marvelous adaptation of Burpo’s book of the same title played out.

Burpo is a hard-working pastor at a Wesleyan church in the flat, expansive Nebraska plains. Greg Kinnear should hear his named called around nomination time for his genuine portrayal of a man who wants to help his community so much that he coaches the school wrestling team and puts out fires with the volunteer department. And Burpo wants to help his family so much that he also has a business in which he installs commercial garage doors.

Times are tough economically for all, so Burpo takes trade for his services when other business owners can’t come up with the cash. We see him trucking new carpet to the firehouse.

And then the unthinkable happens. Four-year-old, cute-as-a-button Colton takes on a high fever that lasts for days. When his wife Sonja, wonderfully played as compassionate and deep by Kelly Reilly, convinces Todd that they must rush Colton to the hospital, they find that the precocious child’s appendix had burst.

The hours stretch as the stricken parents wait for news in the emergency room. Mom calls serious church leader Nancy Rawling, played by Margo Martindale at a total180 from her sitcom role in “The Millers,” and asks for her to put together a phone prayer circle. Soon the whole congregation, if not the whole town, is praying for the boy’s life.

Colton comes out of it.

And from here, the questions pile up because Colton tells his dad, story by story, about what he saw when Jesus took him for a visit to heaven while he was on the operating table.

But the congregation and town is polarized as news of the boys’ story spreads.

The ending answers some questions for these people and this story. But it leaves the big one up to every individual in the theater.