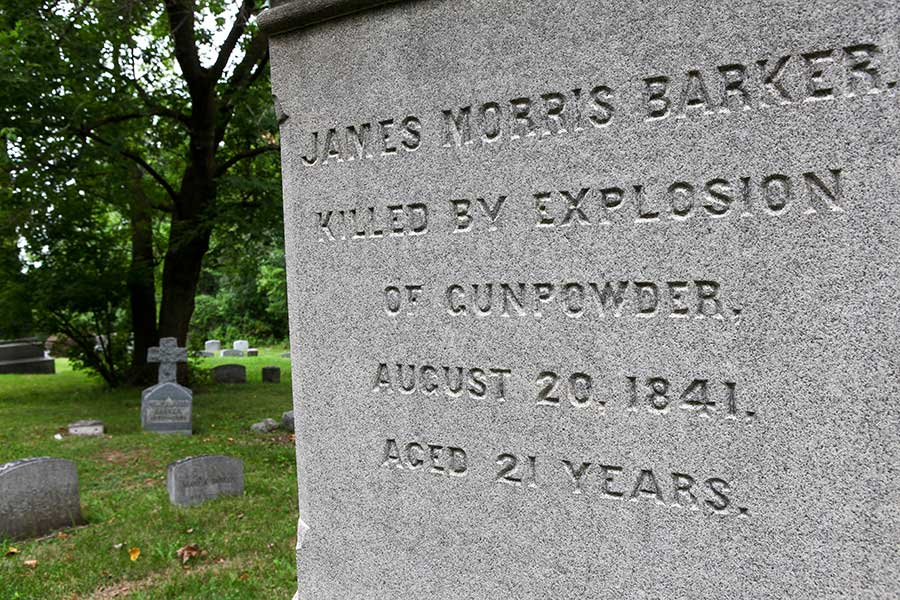 Over the past several years, I have been exploring our local history by visiting Oakwood Cemetery in an effort to find tangible connections to the stories I post on my Instagram account, @SyracuseHistory.

Years ago, when photographing the former chapel in the cemetery, I stumbled upon a flyer for a series of guided walking tours that would be held in the coming months. Shortly thereafter, I attended my first tour. But for vacations, I haven’t missed one since.

Most tours are led by local historian Sue Greenhagen. Each tour focuses on a specific section of the cemetery that sits adjacent to the campus of SUNY College of Environmental Science and Forestry and Interstate-81. Oakwood’s first burial occurred in 1859 and it remains an active cemetery today.

Greenhagen is a board member for the Historic Oakwood Cemetery Preservation Association, a group dedicated to maintaining and promoting the historic grounds. A native of the Mid-Hudson Valley area, she moved to Syracuse in 1990 and was quickly roped into helping with the cemetery by her sister, who was a board member at that time. “Who knew you could have so much fun with a cemetery,” Greenhagen says. 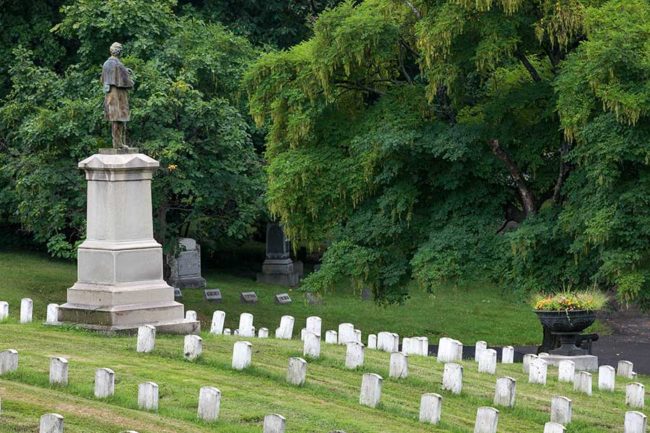 At a recent tour, Greenhagen highlighted the story of Civil War veteran Samuel Abbott. Greenhagen, also a member of the Onondaga County Civil War Round Table, learned about Abbott’s story while conducting a census of all the Civil War veterans in the cemetery. Greenhagen’s team of volunteers has counted more than 800 Civil War veterans thus far. This total includes a rare Confederate grave, several generals and a member of Glory, the 54th Massachusetts Infantry Regiment, the first African-American regiment organized in the northern states.

The title of the most famous soldier buried in Oakwood might belong to General Edwin Vose Sumner, a commanding field officer. According to the research of Rick Burton, Sumner influenced the work of former Syracuse University student Stephen Crane in his writing of The Red Badge of Courage.

The story of Abbott is one that must be told, explains Greenhagen. “I get so excited to tell these stories, and the tour provides the perfect venue.” She added that “the tour is never morbid, I make it personal, informative and provide a sense of humor.” Greenhagen recently gathered the group around Abbott’s tombstone in Section 17 and began telling the tale of what some consider “The Ghost of Albany.”

Born in Syracuse in 1833, Abbott enrolled in the 12th New York State Volunteer Infantry at the start of the Civil War. Following the war, Abbott returned home a decorated veteran and began working as the postmaster of the First Ward before the carrier service was inaugurated. For a number of years, he engaged with his father in the manufacturing of barrels and involved himself in local politics. Around 1896, Abbott decided to move to Albany after being appointed to a position at the Capitol by Archimedes Russell, also of Syracuse, who was a member of the Capitol Commission at that time.

On March 29, 1911, the 77-year-old Abbott was working at the State Library inside the Capitol as a night watchman. According to an article in the March 30, 1911, edition of The Post-Standard, Abbott told his co-workers that he was heading out to “make his rounds.”

At 2 a.m. a fire broke out inside the building. It was reported that Abbott began an effort to save countless documents, historic artifacts, books and maps. Reports state that Abbott could be seen inside the building opening windows in the smoke-filled library. During the hours that followed, Abbott was reported missing and believed to have perished. New York Gov. John Alden Dix quickly issued an order to “Find Abbott’s Body!”

Workmen, joined by Abbott’s son, George, cleared away debris and ultimately located Abbott among the ruins on the fourth floor. Abbott was the only casualty of the fire.

According to a bill honoring Abbott’s memory, “His silver-handled cane was discovered a short distance away, and in his pocket remained a key to a locked door just a few paces further, through which he might have escaped.”

Four months before his death, Abbott had returned to Syracuse to mourn the death of his wife of 45 years, Jane, who had passed away after a long illness. It was reported that after his wife had died, Abbott declared “he had nothing left to live for.” Abbott’s body was returned to Syracuse on April 2 and he was laid to rest next to his wife in Oakwood Cemetery. The Legislature provided Abbott’s family with $280.16 for a proper funeral.

Gov. Andrew Cuomo recently honored Abbott’s memory by ordering that a plaque be installed on the fourth floor of the Capitol building. “Samuel J. Abbott served his nation and died in the service of this state, and this plaque will be a fitting honor of his life and the tragic events that claimed it,” Cuomo said in a statement. “This fire was a significant part of the history of the Capitol and this measure will help ensure this story continues to be told and Samuel Abbott continues to be remembered,”

Allegedly, Abbott is somewhat of a legend at the Capitol, as there have been several ghost sightings and reports of an individual resembling Abbott. The ghost floats through the hallways, accompanied by the smell of smoke and the sound of jingling keys.

This unique story is just one example of what one might hear when attending one of the guided walking tours hosted by the Historic Oakwood Cemetery Preservation Association.

Each tour runs from 60 to 90 minutes. Follow the tour signs to get to each meeting place from the entrance of the cemetery on Comstock Avenue. All tours are free, but donations are accepted. Two tours remain for the year, on Sunday, Aug. 19, and Sept. 16, both starting at 2 p.m.

For more information, visit the association’s Facebook page or visit the cemetery yourself and start your journey into the past. As Greenhagen says, “You’ll always find something new in Oakwood Cemetery.

Behind the wheel at the Brockway Museum in Cortland (photos)
Pining For Pyrex: The craze around vintage kitchenware with a Corning connection
To Top