The Syracuse University Drama Department’s rendition of Aeschylus’ Agamemnon probably bears little resemblance to what the Athenians must have seen enacted at the Theater of Dionysius some 2,500 years ago. Yet the ancient Greeks might have enjoyed this vivid, colorful interpretation, which runs through Sunday, Nov. 15, at Syracuse Stage’s Storch Theater.

Director Rodney Hudson has pulled out all the stops in re-enacting the long-awaited return of victorious Agamemnon (the excellent Alen Ghavami) from Troy to his scheming wife Clytemnestra (O Candide-Johnson). Hudson and his talented cast take every opportunity to convert the verses chanted by the chorus into visual scenes. As the chorus, led by faculty members Leslie Noble and Kathleen Baum, describe the battle outside the walls of Troy, we witness the carnage, choreographed by Anthony Salatino. As they describe the long sea voyage home, we see a clever semblance of a ship cross the stage. As we hear about the killing of Iphigenia (Kara Cooper), the daughter Agamemnon has sacrificed to the gods, we see the girl desperately trying to escape by climbing a wall. 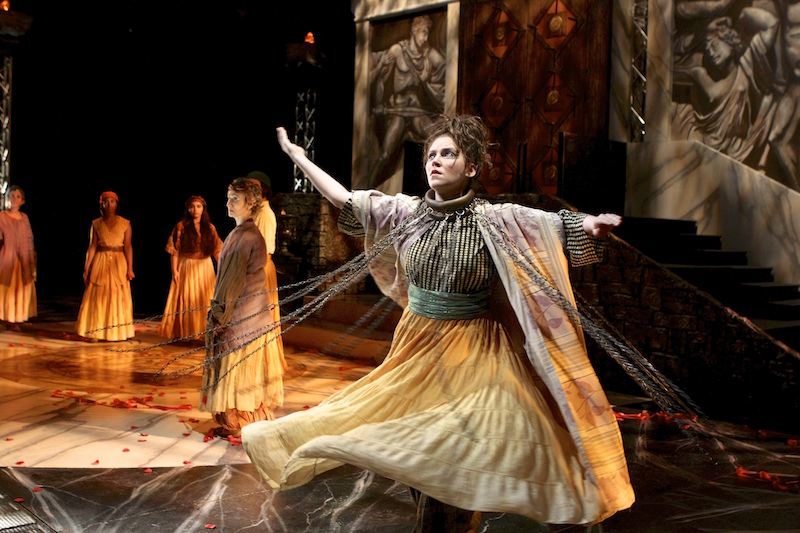 It’s not quite Agamemnon: The Musical, but this production is certainly filled with music and dance-like movement. The townspeople of Argos give their victorious king a clamorous homecoming, as they dance with joy, form a circle and beat their hands on the ground. Cassandra (Erin Christine Walsh), the captive Trojan princess Agamemnon has brought back from the wars, whirls with chains flying from the collar about her neck before going into her prophetic trance.

The galvanizing drum beat of Emmett Van Slyke’s music is performed in real time from a console at the side of the stage, synchronized with every movement made by the cast. A continual, almost subliminal low hum increases the tension.

While Medea is usually the character in Greek drama celebrated by feminists as a woman who takes control of her fate in a male-dominated world, Clytemnestra emerges in this production as an impressive woman of great strength. In ancient Greece she would have been played by a man in a mask. As played here by the regal, sultry-voiced O Candide-Johnson, it’s little wonder she has the power to lure Agamemnon into tempting the gods by walking up the much-too-elegant purple carpet — to his death.

She’s the one who heads off a revolt by hushing up her arrogant lover, Aegisthus (Jerrod Everett), and shooing him back into the palace. And once she has avenged her daughter’s murder, it is Clytemnestra who calls for an end to the cycle of vengeance that plagues the family. Her plea is in vain, but that’s the story of another play.

Diary of a Mad Housewife
Wham, Bam, Thank You Spam
To Top