August in Central New York means hot days and nights. But you can chill out on Sunday, Aug. 16, at a cool new festival of libations in the Finger Lakes.

The inaugural Summer on Ice Craft Beverage Festival celebrates ice-style wines and craft beverages made in the Finger Lakes. The event is scheduled for noon to 5 p.m. at Standing Stone Vineyards in Hector, on the east side of Seneca Lake. It’s a collaborative effort between Standing Stone, Wagner Vineyards and Finger Lakes Distilling.

Attendees can expect an afternoon of artisan food tastings, cooking and mixing demos, music, and simply kicking back and enjoying the surroundings and view. The event is a fundraiser for the Finger Lakes Culinary Bounty, a regional food network dedicated to promoting locally produced foods and beverages.

Under a tent, guests will have an opportunity to visit tasting stations spotlighting cheeses, crostini, spicy fare, charcuterie and fruits and vegetables paired with ice-style wines, craft beers, ciders and cocktails. Notice the absence of desserts at the tasting stations and in the cooking demos/pairings.

Cooking and mixology workshops will be offered from 1 to 2 p.m. and 3 to 4 p.m. At 1 p.m., chef Brud Holland of Finger Lakes Made will prepare Finger Lakes garlic beef sliders, paired with craft cocktails. At 3 p.m., chef Brittany Loughlin of Atlas Bowl in Trumansburg will demo clams with sweet Italian sausage and fennel, paired with craft cocktails.

Marti Macinski, co-owner of Standing Stone Vineyards, says that rich, flavorful and intensely sweet ice wines are known primarily as dessert wines, but they’re more versatile than that. True ice wines are made from grapes that are frozen on the vine; harvest is usually a bitter cold day in November and there is a lot of grape loss.

Vineyards like Standing Stone, Wagner and others have instead turned to ice-style wines, including Riesling ice, Gewurztraminer ice and Vidal ice, which are made from grapes harvested late in the season and frozen before pressing. “We do it our way and we get a lot more grapes,’’ Maciniski says. “The wines are very sweet and intense and concentrated.’’

Macinski sees Summer on Ice as a teaching moment. The sweet wines can be enjoyed on their own, paired with cheeses and savory and spicy foods and used in cocktails — as a flavoring agent and as a replacement for simple syrup, for example. “I think people’s eyes are going to be opened about this wine,’’ Macinski says.

Tickets are $30 in advance, $35 at the door. Standing Stone Vineyards is at 9934 Route 414, Hector. For more information, visit summeronice.com or like them on Facebook.

When Ben and Shioban Reilley of Cazenovia’s Life of Reilley Distilling and Wine Co. introduced their small-batch, artisan vodka last year, they knew they wanted to take it a step further and offer a pre-made cocktail.

They mix up a sample cocktail each week for the Cazenovia Farmers Market (and other events they participate in), because most people don’t want to sample spirits straight up, Ben says, and often they ask what to mix the vodka with. They’ve sampled about two dozen cocktails, but the one they call Disco Lemonade, a combination of their raspberry vodka and fresh-squeezed lemonade infused with fresh mint, stood out from the rest. 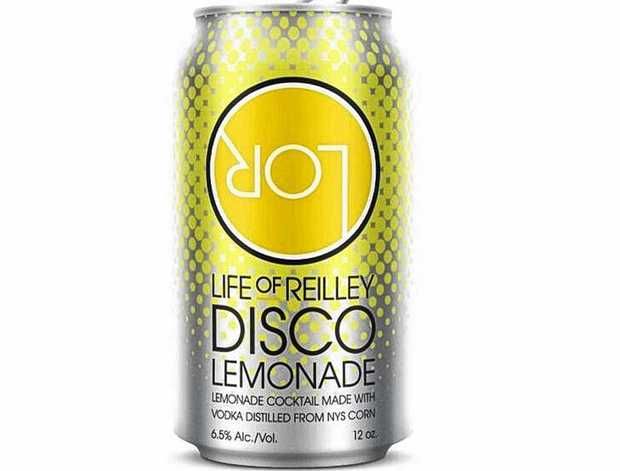 Image provided by Life of Reilley

Life of Reilley announced it will soon launch Disco Lemonade, the first pre-mixed canned cocktail produced by a farm distillery in New York state. You can try it on Friday, Aug. 14, 6 to 8 p.m., at the Sunset Grill in Sylvan Beach, as part of the Endless Summer celebration. You can also taste it on Saturdays at the Cazenovia Farmers Market.

The canned version of the cocktail contains a little bit of carbonation, Ben says, so the cans don’t get “squishy.” The Reilleys still have several steps of the government regulation and approval process to get through, with hopes that an official launch of Disco Lemonade will happen in October. It will be sold in bars, restaurants and wine shops.

“Disco in a can is a perfect brand extension for us,’’ Ben Reilley says. “It’s fun, mobile (boats, beach, golf course) and easy! Disco is an ‘on-demand’ cocktail.’’

The story behind the name: “I was simply sitting at a bonfire party and watched every woman walk in with a 12-pack of Bud Light Lime-a-Ritas. We brought a batch of lemonade (which quickly disappeared), the Lime-a-Ritas sat in the cooler, a fun time was had by all and I called it Disco Lemonade!’’