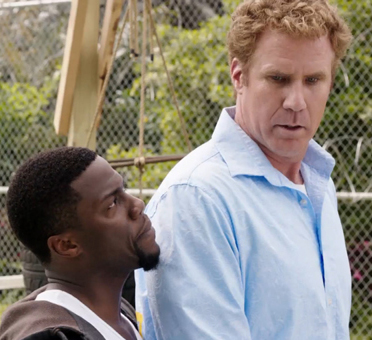 Your assumption is right.

Get Hard will offend those that take offense at any movie that broaches the subjects of male prison sex, homosexual sex of any sort, and general hate because of sexual orientation, economic strata and race.

This comedy starring Will Ferrell and Kevin Hart checks off that box with the innuendo of the title and strongly walks down that path for the next 100 minutes directed by Etan Cohen and written by Jay Martel and Ian Roberts. So, if you know that any or all of the above is too much for your comfort, skip this deserves-its-R-rating-and-then-some tale of a financial genius but real life savant played by Ferrell who falls fast and turns to the fast-talking family man car wash owner he typically misreads played by Hart.

Yeah, some of the lowest of their base humor was offensive. The scene that put Ferrell’s James to his knees in the men’s room of the toney gay restaurant at the orders of Hart’s Darnell, for instance, went more than two beats too far.

But I’m glad I went to the Friday matinee nevertheless, because if you skip the mash-up between the guy who’s 15 years into using his face and line delivery and timing to win audiences over in major movies and the guy who has eight top credits in the theater since 2013, you’ll miss a statement that surprisingly smart amid its bluster.

Hart and Ferrell slowly forge a great chemistry as Darnell and James bond to ready the poor rich guy for 10 years hard time in San Quentin. They cover all the turf that James needs to master to make it there, James assuming that Darnell’s such a great teacher because of first-hand experience. It’s a tough road, indeed, because even James realizes he’s woefully unprepared for what’s ahead, he knows even less than he thinks.

Along the way, they’re forced to tango and tangle with rich folk, family, and gang members, pleasingly played either evil or sweet by Craig T. Nelson and Alison Brie, Edwina Findley Dickerson and Ariana Neal, and T.I. and Jon Eyez.

Hart and Ferrell run full speed and head first into stereotypes, one by one and sometimes a bunch at a time, until they’ve addressed and handled all of them, to both men’s satisfaction.

And by the end of the story, lo and behold, it feels as if a comic torch may have been passed in some symbolic way from Will Ferrell to Kevin Hart, too. Now Hart must treasure the flame.