You think the Syracuse University football team was frustrated with their 17-16 loss Saturday, Nov. 23, to the University of Pittsburgh at the Carrier Dome?

Just wait and see how the SU players are going to feel if they beat Boston College on Saturday, Nov. 30, at the Dome and still don’t get picked for a bowl game.

It’s possible, which is why the loss-that-should-have-been-a-win against the Panthers might stick in SU’s craw for more than one week.

Orange senior defensive tackle Jay Bromley called the Pitt loss the team’s worst of the season. And that’s saying something, considering the Orange was throttled 48-27 by Northwestern, 49-14 by Clemson, 56-0 by Georgia Tech and 59-3 by Florida State.

“This is probably the worst loss, I feel like, personally, all season, because we were so close,” Bromley said. “We’ve had worse losses, but we had it in our hands and we let it slip away.”

Here’s how it can get worse: Let’s say the Orange defeats Boston College–and that’s no easy task–to even its record at 6-6. Even though SU will become bowl eligible with its sixth win, there’s no guarantee it will be invited to a bowl.

If it wins this week, the Orange will become the 11th bowl-eligible team from the 14-member Atlantic Coast Conference. Of the 35 bowl games, the ACC has tie-ins with eight, plus one conditional contract with the Kraft Fight Hunger Bowl. (In case you’re wondering, the ACC has tie-ins with these bowls: AdvoCare V100, Belk, Chick-fil-A, Military, Music City, Orange, Russell Athletic and Sun.)

It will help SU’s cause if likely ACC champion Florida State plays in the Bowl Championship Series national championship game at the Rose Bowl. And it will also help if a series of things happen that will allow an ACC team to be invited to the Fight Hunger Bowl, in San Francisco.

So in the best-case scenario, 10 of the 11 bowl-eligible teams from the ACC will be invited to bowls based on the tie-ins. That still leaves one team out, and the only bowl other than the big-time BCS bowls that doesn’t have a conference tie-in is the New Era Pinstripe Bowl at Yankee Stadium. Since the Orange has played in that game in two of the past three years, what are the chances it will be invited back again? 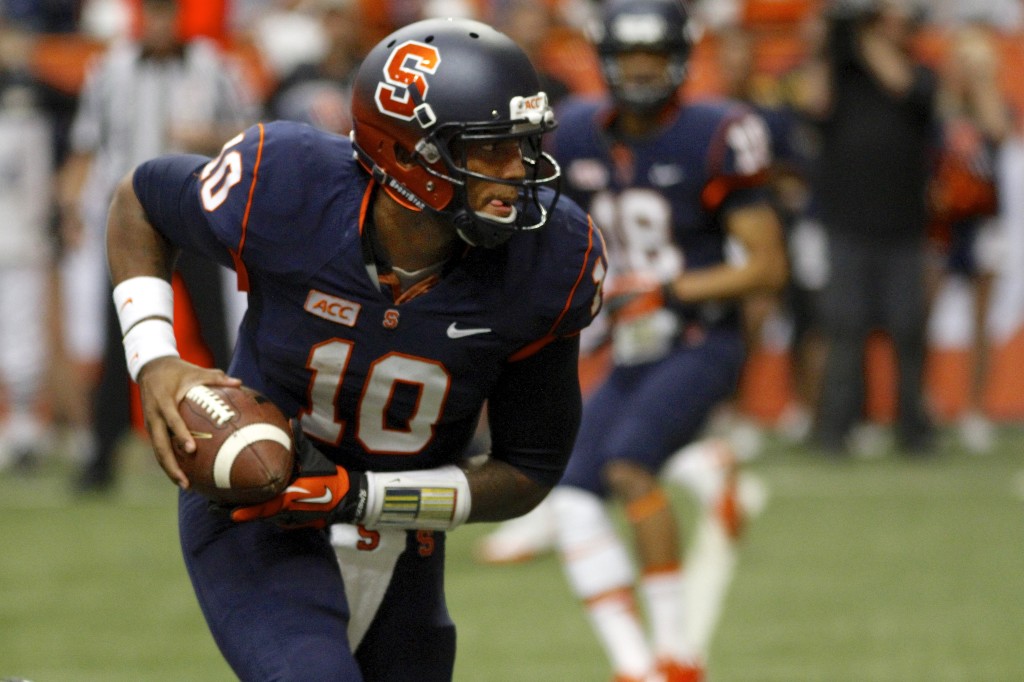 The Orange could have avoided all of these what-ifs by defeating Pittsburgh and BC in its final two games. In the one-point loss against the Panthers, SU had an extra-point attempt blocked, missed a 41-yard field goal, committed several costly penalties and failed to drive for the winning points despite moving the ball to the Pitt 36 with 1:03 remaining.

Yes, the Orange is beat up: Tailback Prince-Tyson Gulley, wide receiver Jarrod West, H-back Brisley Estime and other key players missed the Pitt game with injuries, and starting offensive tackle Sean Hickey left the game midway through the first quarter with an injury. But the way the game played out and ended made the loss harder to take than any of those blowout defeats.

“That frustration we have, the kids have it,” Coach Scott Shafer said. “We have to foster that frustration and turn it in to motivation to get this victory against Boston College back here in the Dome.

“We’d like to have everyone healthy, but hell man, that’s what it is,” Shafer added. “So let’s go after it the best we can. Man up, and see what the heck we can do.”

Boston College improved to 7-4 last weekend by defeating Maryland 29-26 on a last-second 52-yard field goal. That game was at Maryland, where the Orange manhandled the Terrapins 20-3 Nov. 9. So while BC is hot with four consecutive wins and boasts a dark horse Heisman Trophy candidate in 2,000-yard rusher Andre Williams, the Orange can win if it can muster up some offense to match its ferocious defense.

“We can’t change because of a loss. We have to go out there and have fun during practice and make sure we execute and do everything right,” senior linebacker Lewellyn Coker said. “We just need the win and don’t worry about anything else, just win.”

While the difference between 6-6 and a bowl and 5-7 might not seem like a lot, it’s extremely important to the program and the players. For the players, particularly the seniors, a bowl game is a reward for a long season of hard work. For the program, it means a few more weeks of practice, more visibility for recruiting and a destination for alumni to vacation during the holidays.

“It’s very important. Everyone knows that,” SU senior cornerback Ri’Shard Anderson said. “It’s a big-time thing that can change the program and show everyone that we can be that dominant team.”

The difference between 7-5 and 6-6 is that at 7-5, there would be no question that the Orange would go to a bowl. Now, there’s no guarantee at 6-6, but the only way SU can be in the conversation is to win Saturday.