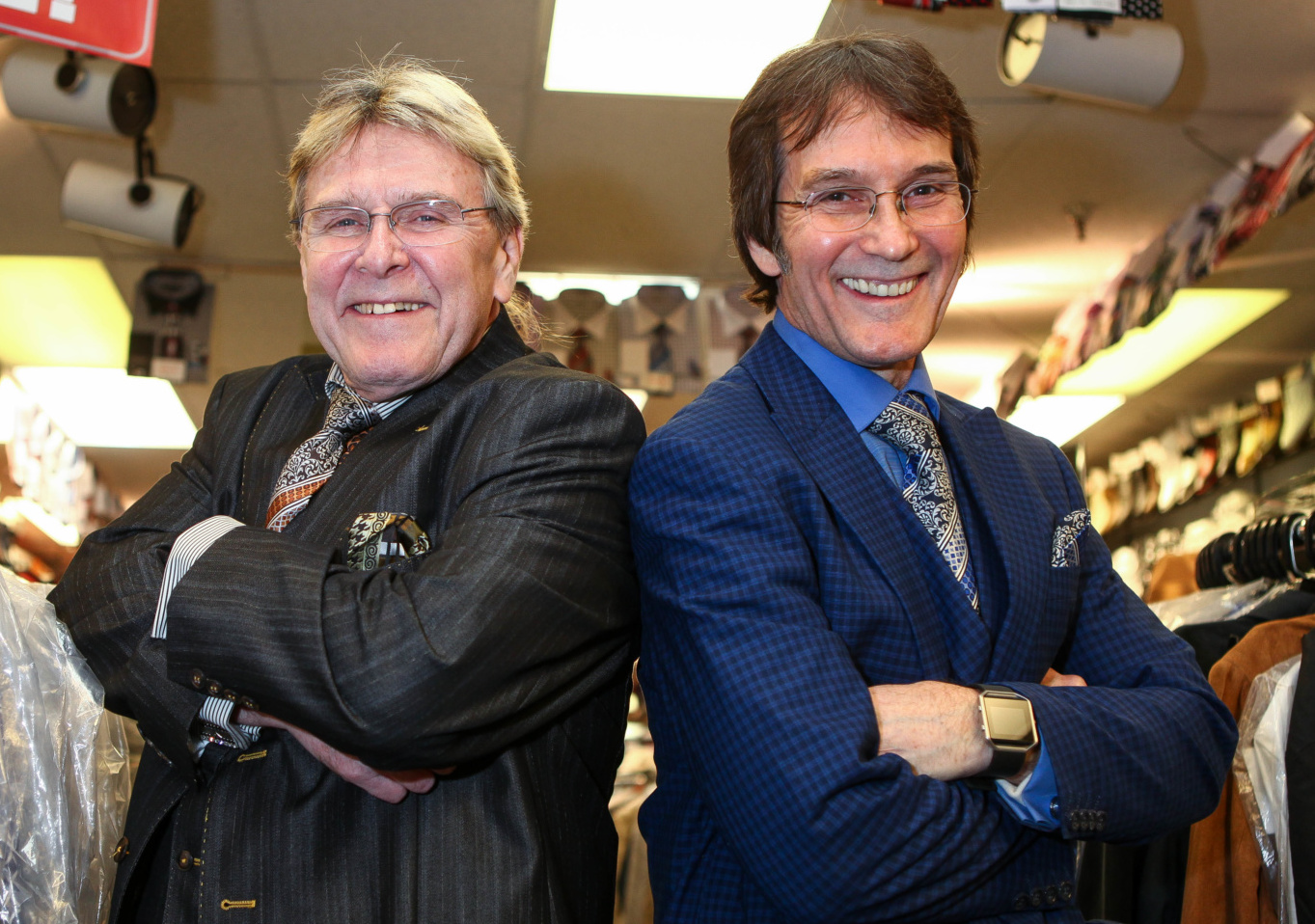 Bergan Brothers Clothing is more than your average retailer

Dave Bergan’s fashion consciousness came early. His family talked clothes at the dinner table. After all, his family was in the clothes business.

“A family of retailers,” he recalls about growing up in Fulton, where his father started a clothing store in the late 1950s. “Throughout the years everybody in the family participated in the business. Finally my brother Michael and I decided to go in as partners together in the early 1980s.”

The family tradition has settled in over the years until the point where Bergan Brothers Clothing is the longest continuous running business on South Salina Street in downtown Syracuse. The shop, 328 S. Salina St., is open Mondays through Saturdays, 10 a.m. to 6 p.m. For information, call (315) 471-9162 or visit berganbrothers.com.

Dave and Mike occasionally reflect on how tough business can be and whether they should continue. “But as good retailers, you put your feet down,” Dave observes. “You really take a look at what the reality of life is out there. We’ve decided to stay in downtown Syracuse. We want to show people across the country that this is a vibrant, active and beautiful community to do business in.”

What was your very first sense of fashion?

We grew up in the fashion business, so as a young boy that was the talk at the dinner table. We were a typical Irish Catholic family. At night all five children were queried on our daily activities, but then fashion and clothing would become the focus.

Did you ever imagine you would end up with a store of your own?

Probably not at all. In those days in Fulton, there were seven or eight small men’s clothing stores, predominantly white. As we moved our business into downtown Syracuse, we saw a very unique reason to have clothing for the Afro-American. We looked out onto Salina Street and saw the tremendous need. We actually moved the racks out on the sidewalk. I wore a change purse, similar to a carpenter’s nail bag, and we would actually do business right on the street.

Was it hard to find the clothes to stock?

In those days the garment industry wasn’t targeting the black shopper, particularly the Afro-American male. It was difficult at first. As the years went on, and with a lot of coast-to-coast traveling, we found the sources who could supply us with the merchandise.

But as the retailing developed, did you become more than just a clothes store for the communities of color?

Very, very important: The NAACP has an award, and in 2001 it was presented to myself and my brother Michael for being a participant in the community. What a great honor that was at that time.

Was one of your greatest achievements the creation of a black Santa Claus at Christmas time?

All our clientele, and certainly all the children, would come in around the Christmas season, and they would go to the malls and confront themselves with a white Santa Claus. We thought it was very important to be so special for that community, and we had a fella working for us who took great pride in doing it, (the late) Mr. Zack Odum. We put him right in the front window: We had an Afro-American Santa Claus, a very jovial man. It was a great success; it went on all three television stations.

Who knows? But what a surprise for the children when they came in for their own Christmas. It was a delight to provide that service to the community I remember working closely with Jackie Robinson, who was with WSTM-Channel 3 at the time.

You were also active downtown, such as being elected president of the Heart of Downtown Association.

In the early 1980s we had a very active merchants association. We had more locally owned merchants downtown. We didn’t have the chains. We didn’t have the development you see now. We were a very active group for about 18 years. We had the Summer in the City activity, which would block off the streets for a weekend. We had the three-on-three basketball, which actually started right here in front of the store on the 300 block of Salina Street. They voted me in 18 years in a row.

What did you learn about downtown from that experience?

I learned where downtown really is. It’s a mixing of cultures and we had to become aware of that and who the clientele really was and who we could provide our product. That’s when we really started to excel in providing fashion and fun.

One of the most fun experiences must have been Live at Bergan’s, the in-house informercial show on WNYS-Channel 43 in the mid-1990s. Was throwing clothes on the floor your signature?

It was kind of an accident that happened. I got frustrated, loaded up with clothes that were passed by one of my associates, and I decided to start throwing them in a nonsensical way out to the audience, and it became my trademark. I still have people, many years after the show, come in and say, “You’re the guy that used to throw the clothes on the floor.”

In those days we came on right after Soul Train. We had the unique experience to have Mr. Don Cornelius, who isn’t with us anymore, actually call us. And I blew him off. His assistant called one day and wanted to offer us a donut, which is a preview on Soul Train, regionally, not nationally, to advertise Live at Bergan’s. I thought it was kind of a hoax, because we would get 40 to 50 phone calls every Saturday because we called ourselves Live at Bergan’s, although we were a taped show.

So I blew him off and then Channel 43 called and said, “Why did you blow off Mr. Don Cornelius?” Then he called, and I had the beautiful opportunity to speak with him, and he was so delighted to see that there was a TV show regionally that was making a unique effort in going after the excitement of the Afro-American trade community, the dance part of it, the fashion part of it. He gave us two free donuts, and they were very expensive in those days, two previews on his show saying “Coming up next, Live at Bergan’s.”

Why is the show no longer broadcasting?

They have many times asked us to do the show again, but there is the time involved with doing a production, and Michael and I are devoting our time to really expand Bergan Brothers on a national basis. That’s with our brick-and-mortar store as well as our internet facilities. Now what we do is a lot on the internet.

How did you discover the internet?

I have to tip my hat to my brother Mike. He’s the one who, many years back, had the foresight to realize that the retail men’s clothing, and perhaps any retail situation, to sell your wares you’re going to have some sort of internet exposure. So Michael built the page, it’s all self-starting, we’ve done it all in-house. We started our internet business, and it’s flourished.

The real secret for retail going forward is a combination of brick-and-mortar as well as the online business. You see that Macy’s is closing so many stores, but they are keeping their flagship stores. People still want to touch and feel and experience the fun and excitement of shopping for clothing right in the store, but then we find that 2 o’clock in the morning people are buying suits all across the country, in Iowa, in Illinois. So we’ve become a coast-to-coast national business, which is of great pride for my brother Mike and me.

But I don’t think anything is guaranteed in the clothing business. I have a lot of students from Syracuse University that come down every year, and we try to show them that it’s an extremely risky business, but with a well-thought-out game plan you can have a nice career. But you have to be aware of the changes in the market that we confront.