For a recent college graduate, receiving a diploma in the fine arts can make it difficult to map out a career. But there are some who know exactly what they want to do with their futures.

With an edgy, contemporary aesthetic in a throwback setting, Apostrophe’ S defiantly remains in the present. Experimental art is juxtaposed with the vintage building, which in a former life was a frame shop.

A lot has happened in the time since the women first came across the old storefront. Following graduation, the pair nearly went their separate ways, with Kirsch set to return home to New Jersey and Wilson to Ohio. They threw around the idea of finding a studio space that they could also inhabit, but their search yielded no affordable results.

By a stroke of chance (or fate), Wilson’s mother spotted a Craigslist posting in April for a space that could potentially serve as a home, studio and showcase floor all rolled into one. She convinced the two to speak with the landlords.

“We both had skills to run a gallery, but that had never been the game plan,” says Kirsch. “It just fell into our laps and we’re really excited it happened this way. It’s an amazing place to work.”

Renovating the space wasn’t an easy task. After moving in as residents above the gallery in May, an exhausting, monthlong makeover was done entirely by Kirsch and Wilson in between working day jobs (which they still hold) to make ends meet.

Shag carpet was torn up to reveal a wooden floor, and a false wall was installed to separate the gallery from the personal studio. The old ceiling tiles in the showroom were removed as they began to refurbish the original tin ceiling, a process which is ongoing. By the end of June, the 22-year-olds were poised to open the doors of their new space as co-directors with a mission: to bring innovative art and events to the North Side. 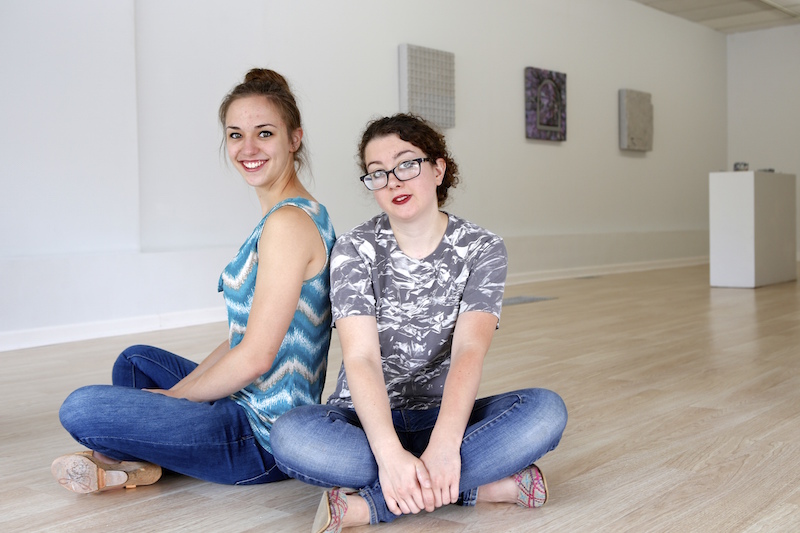 Even after the renovations, the retro charm of the frame shop remains intact. On the front windowsill looking out onto Oak Street, porcelain antiques are nestled in the company of abstract sculptures, paying homage to the space’s past and future. Wilson has a penchant for nostalgic knick-knacks, frequently perusing flea markets and estate sales in her spare time.

Wilson’s classic touch was felt in her initial video and installation exhibit that exploded across nearly half of Apostrophe’ S ground plan. Wilson’s untitled art piece included eviscerated mattresses and refrigerators (splattered with neon blues and pinks) strewn about as domestic appliances and items from the 1950s rested on top of them, while a black-and-white video showed the artist furiously cleaning a house and shaving her legs with a men’s razor that was made nearly 60 years ago. It served as a modern message about gender roles, among other topics, through an old-fashioned lens.

Yet Apostrophe’ S will not solely revolve around the sculptors who founded the gallery. For instance, Brian Giniewski’s sculptural painting show Making Certain will run at the venue through Sunday, Sept. 13. Kirsch and Wilson plan to host other artists from inside and outside the city’s limits. There have also been early talks of connecting with their alma mater and establishing a young artist program with local elementary schools.

“It’s a very versatile space,” says Kirsch, “and it’s able to change and adapt.” In the meantime, both avant-garde and traditional artists wishing to showcase their work can apply on the gallery’s website.

Looking ahead, musical evenings from regional and national talent are in the works. The intimate nature of the gallery lends itself to all kinds of performances.

With Apostrophe’ S, not only have these newly minted grads found their business, but also a place where Kirsch and Wilson’s love of installations and sculpture as creative mediums echo their ideas of what they can do with their new home, studio and show floor. “I want to transform the room so you’re not in a gallery,” says Wilson, “but entering into a whole other world.”

Andy Belt is a graduate student in the Goldring Arts Journalism program at Syracuse University.