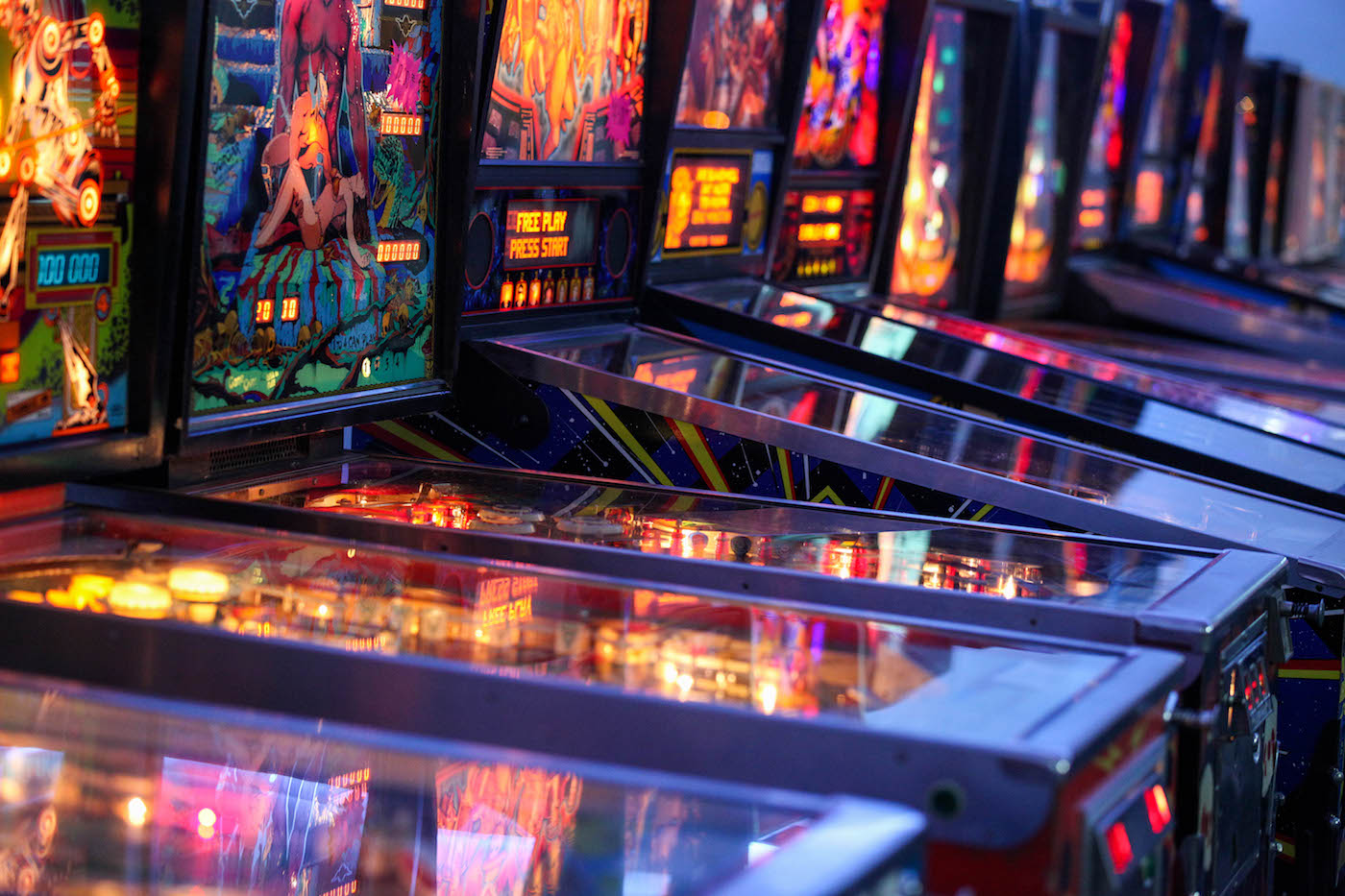 The tilts, colors and ricocheting action of pinball is back in Central New York.

Flashing lights and colors inside large, stationary machines coupled with the clamor of bells, chimes and digital sound effects have officially returned to Central New York.

This is the type of environment you’ll find at Syracuse PINheads arcade, located within Cloud City Comics and Toys at Shoppingtown Mall in DeWitt. There’s more action to be found at Wizards Pinball, 312 S. Main St., North Syracuse.

PINheads serves as a pinball arcade, the only one in Syracuse, in fact, while Wizards is a pinball-machine shop where all devices on the main floor are for sale. At Wizards, owners can also take in their machines for repair. Both locations opened in the past year, with PINheads just having commemorated its one-year anniversary with a tournament in January. 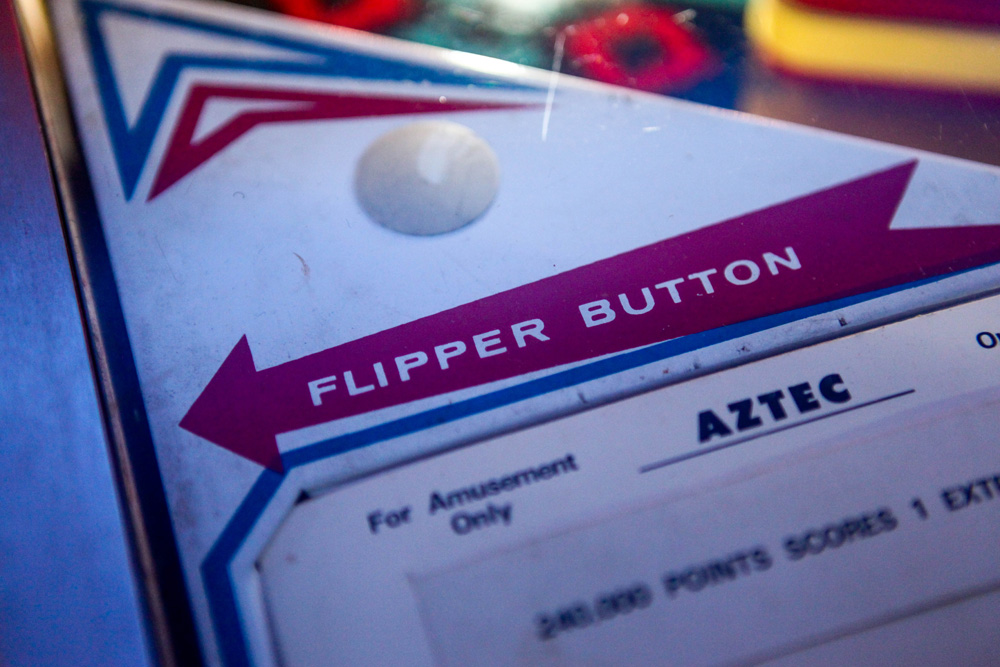 Pinball is seeing a resurgence across the country, and thanks to budding establishments like PINheads and Wizards, Syracuse is right in the thick of it. A pinball community is growing in Central New York, although it didn’t start over night.

From as early as 2014, small crowds of enthusiasts in Syracuse held tournaments in homes of people who owned machines, along with the occasional bar or Laundromat, but there were no venues in the area that contained more than two machines on location.

Tournaments are now held on a near weekly basis, thanks to a Facebook group called CNY Pinball that got the ball rolling. The public group, now with more than 170 members, continues to grow every week.

Dave Cohen, a pharmacy technician at Community General Hospital, created the CNY Pinball group after an online search for other local pinball lovers proved fruitless. He started playing pinball again in 2014 while waiting for an in-law at an airport.

As he scoured the pinball forum website pinside.com, Cohen connected with Mike Smith, the eventual owner of Wizards Pinball. The two then got together for a few small tournaments, and after several weeks, Smith helped Cohen officially launch CNY Pinball.

“From there I bought a machine, then another one after that,” Smith said. “Then the next thing you know I had like nine or 10 in my basement.”

Smith grew up in the 1980s and 1990s during the heyday of video game rooms, where he said he spent a fair amount of time growing up. “They had an arcade at Penn Can Mall (Play Palace) where I used to play a Black Knight 2000, which ended up being my first game I ever bought that worked,” Smith recalled.

After his own hiatus from playing pinball, during which he joined the military and started a family, the game found its way back to him in the form of an iPhone app called Pinball Arcade.

“Black Knight 2000 came out on the app,” Smith said. “Then I remembered the sounds and gameplay, and I wanted a real one.” 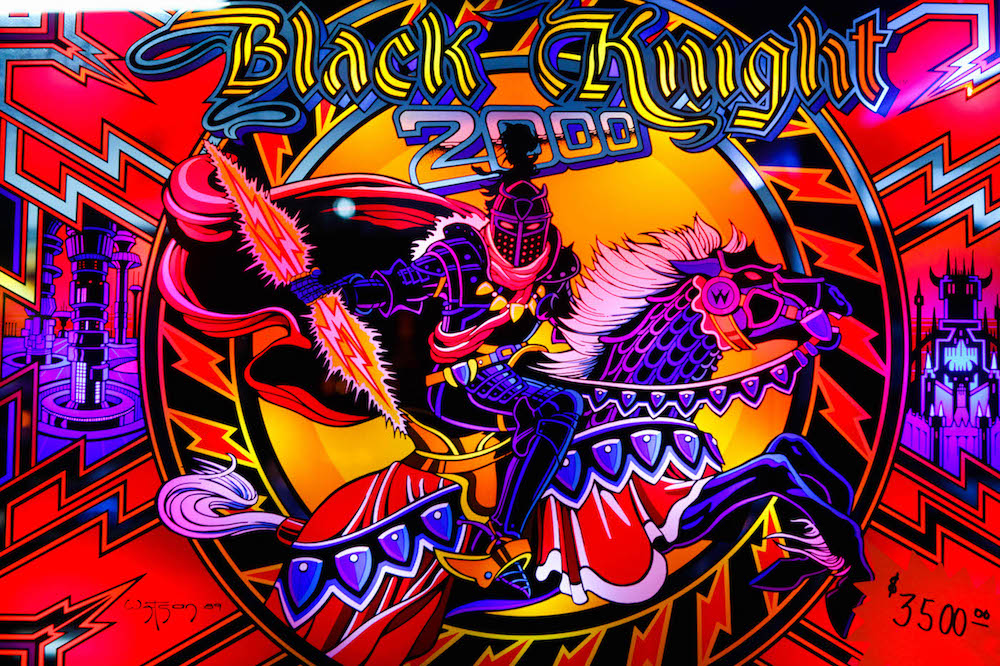 Through the CNY Pinball group, Cohen and Smith met Ryan Zlomek, subsequent owner and operator of Syracuse PINheads and a teacher of computer technology at Manlius Pebble Hill School, during a pinball league game at Al’s Wine and Whisky Lounge in Armory Square.

Zlomek’s interest in pinball dates back to when he visited a friend’s house in New Jersey as a pre-teen. He remembers two details from that trip: firing up an Atari for the first time, and playing a pinball machine his friend had in the back of his house. 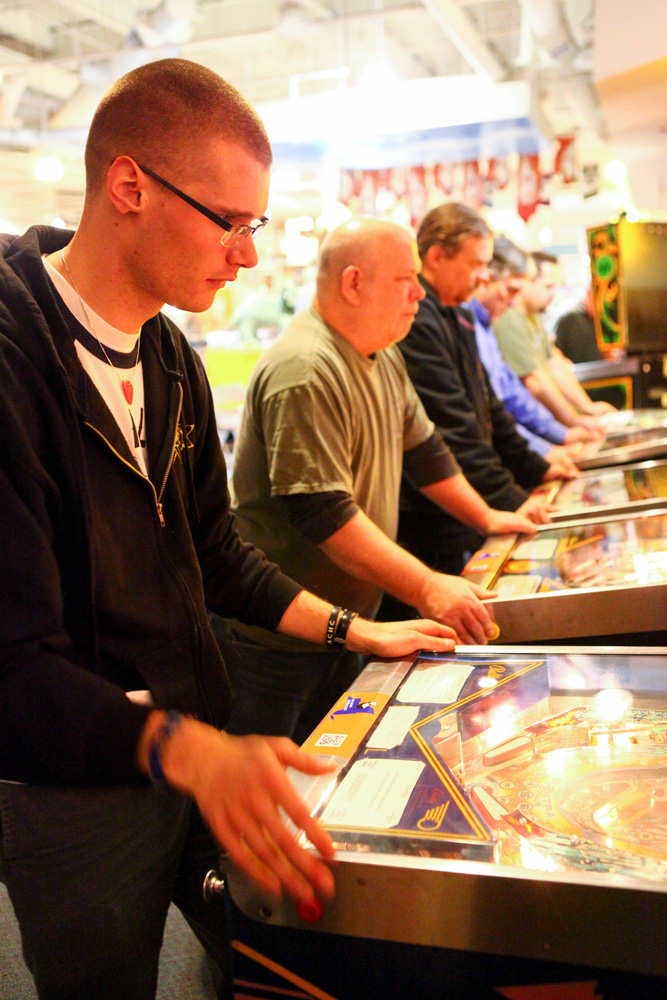 “That was sort of the first time that the genuine interest and the ‘I would like to have one of these’ came about,” Zlomek said.

He would eventually buy his first machine — Cue-T, which features billiards-themed artwork — in 2013 shortly after purchasing his house. He bought two more soon after, then in 2015 he stumbled across the CNY Pinball group on Facebook.

Zlomek then began participating in tournaments with Cohen, Smith and other members, most notably at Al’s and Trapper’s Pizza Pub on Butternut Drive in East Syracuse.

Zlomek continued to participate in Syracuse-area tournaments, but he wanted for more games to be available at once, so he got the itch to create a space himself. Luckily for him, a friend happened to own one of Shoppingtown Mall’s last remaining retail stores, Cloud City Comics and Toys.

Zlomek pitched the idea to Cloud City owner Jeff Watkins, who was on board from the start. He then continued to acquire more machines with the knowledge they’d be going to his new side project, Syracuse PINheads. The arcade now lives in the corner of Watkins’ store and houses eight of Zlomek’s own games for comic-book patrons and tournament goers to enjoy.

During the first year of PINheads’ existence, Smith was also making strides in completing his Wizards Pinball shop. After losing his job as an information technology consultant of 25 years, Smith went all in, hoping to create a new career of buying and selling pinball machines. He cashed in his savings, bought additional machines to accompany the ones he already owned, and rented a space in a small plaza in North Syracuse.

Smith completed much of the renovation in the 1,000-square-foot space by himself, with occasional help from friends and family. This included dry wall construction, painting and electrical to make the establishment fit for numerous pinball machines.

The shop, which currently contains 16 pinball machines, is surrounded by a strand of neon light around the walls that flashes colors on command to give the room a vintage arcade feel. A large mirror is also prominently featured on the back wall to make the arcade feel more spacious.

The business opened in November, and has yet to take off, but Smith is hoping that will soon change.

“So far I haven’t sold a pinball machine out of here yet,” he said. “Just recently I started pricing them out and advertising them. That will be the meat of the business: buying and selling machines to people who are interested in pinball.”

When he’s not co-hosting a tournament with Cohen, Smith’s operation is open to the public Tuesdays through Fridays, 4 to 9 p.m., and Saturdays, 2 to 9 p.m. He charges $10 at the door if customers wish to play any of the games, as all of them remain on free play to avoid the hassle of collecting coins. If someone ends up buying a machine, they receive their $10 back.

Now that the two businesses are fully operational, more competitions are hosted on a regular basis. For example, Wizards runs a tournament every other Tuesday, which typically pits two pinballers against each other in a battle of whoever gets the highest score. The loser gets a strike. If a player gets three strikes, he or she is eliminated. The last player standing with less than three strikes is declared the winner.

League nights are also popular among the group. This essentially serves as one long tournament drawn out over several months, where the top scorers receive a prize and trophy.

Tournaments hosted at Wizards, Syracuse PINheads and elsewhere are also affiliated with the International Flipper Pinball Association, which features a world ranking system for pinball players. What makes this unique is that every player who enters an IFPA-sanctioned event and places in it is automatically given a rank, which Cohen says entices some players to keep coming back.

“After I played my first tournament, which I finished tied for last place, by the way, I think it helps kind of get like a fervor,” Cohen said. “You see how good other people are performing at the same events you’re at, so the next time you show up, you don’t want to finish tied for last place. You’d like to play better.”

More than competing in the tournaments, however, the players simply enjoy each other’s company after spending time together.

“It’s very casual,” said Jess LaCelle, a pinball buff of just a couple years after she and her boyfriend entered a tournament at Al’s on a whim. “I’ve made some awesome friends doing this. I’ll keep going because I’ve gotten so close with the people who are in the group.” 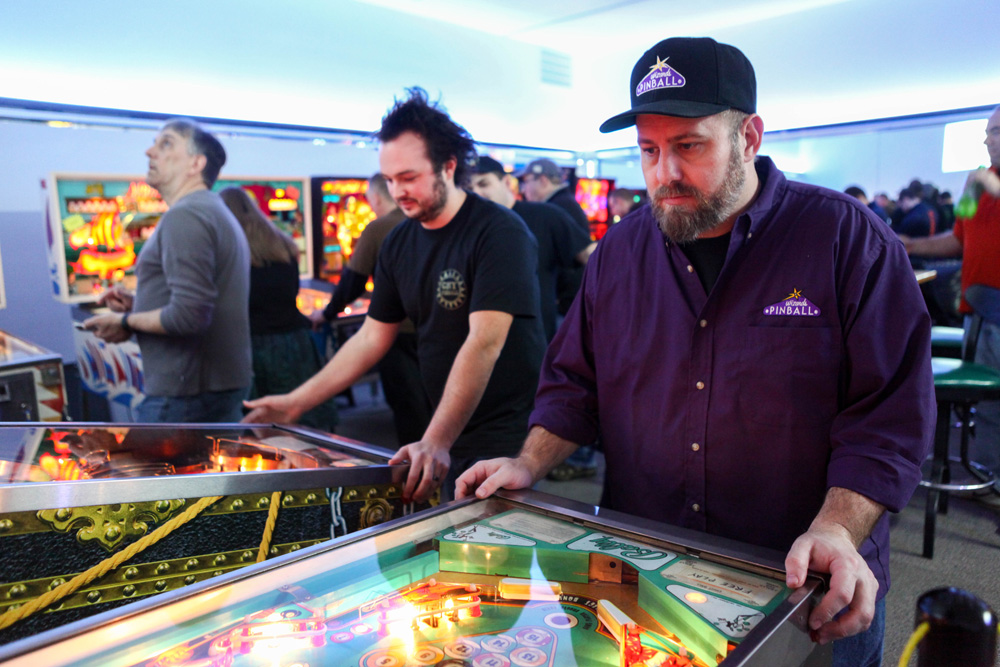 Pinball is also indeed on the rise, and not just in Syracuse. According to the IFPA’s website, in 2008 — the earliest recorded year given — just 2,585 players played in 334 tournaments worldwide. These numbers have gone up every year, with 2016 seeing 17,252 players at 3,545 tournaments.

For those curious about where all of these machines reside, there’s a website and app; Pinballmap.com presents each location that has a machine on a responsive map layout with pins pointing out where they are.

Users may also click on the pin to display what specific machines are there. Click on the machine’s name to the right of the map, and users have the option to learn what other players have said about that particular machine on pintips.com.

An iPhone app created by the same team, titled Pinball Map, mirrors the website with all the same features.

Smith hopes to use pinball’s newfound momentum to grow his business, saying he wants Wizards to blossom into a pinball hub for all to enjoy, while still maintaining his primary business model of buying and selling.

“I’d love to have a bigger place with more machines, have larger events, maybe even offer food or beverages,” Smith said.

As far as Zlomek’s PINheads project goes, expansion is in his sights as well. “I would love to get to the point where this becomes a location that people think to themselves, ‘What should I do tonight?’ And think, ‘I got five bucks, and it’s all in quarters. I should go and play some pinball,’” Zlomek said. “I think that’s a culture that’s completely possible to build, but it’s going to take time.”

For many years, pinball went through a type of prohibition period in areas of the United States, most notably New York City. Considered a game of chance and not skill by former New York City Mayor Fiorello H. La Guardia, pinball was banned from the 1940s to 1976. Then Roger Sharpe, now the co-chairman of the IFPA, went before the New York City Council to prove pinball was a game of skill. He succeeded, and continues to be a strong proponent of the game to this day.

Just as it did in the years to follow, pinball is once again experiencing a renaissance, one that Smith and company are happy to see continue. “It’s on the rise, I think. I’m hoping,” Smith said. “That’s why I’m here.”