Living Space is looking for interesting, unique apartments, lofts and residences in downtown to feature. If you would like to nominate a Living Space, please send an email with a low-res photo or two to: [email protected]

Firefighters used to play handball where Wil Szczech cooks dinner. In the late 1970s, Sting and other members of The Police hung out there, too, after performing their first North American gig in what was then the Firehouse Tavern.

“Then it went from a hip rock club to a home for pigeons,’’ said Szczech, co-owner of Pine Grove Health and Country Club.

Firehouse No. 1, 106 Montgomery St., got its name because it was the first firehouse in Syracuse  built for motorized, not horse-pulled, trucks, he said.
Built in 1914, the first floor housed the trucks; the second housed the firefighters and the third was a gym and handball court.

After the tavern closed, the brick building was vacant for 20 years until Washington St. Partners bought the building and rehabbed it from 2004-2006.
The building now has commercial space on the first floor, two condos on the second floor and Szczech’s two bedroom, one bathroom condo on the third.

“There’s not a lot of condos downtown,” Szczech said. “There’s lots of apartments, but condo are a little tougher sell…. I would never rent. There’s no equity.”

He bought the space about four years ago and ripped out the small kitchen and built a new one. The work came with some logistical problems. Some equipment was too large for the elevator, so he had to hire a crane to hoist it to the third floor.  The refrigerator fit in the elevator only once all the hardware was removed. 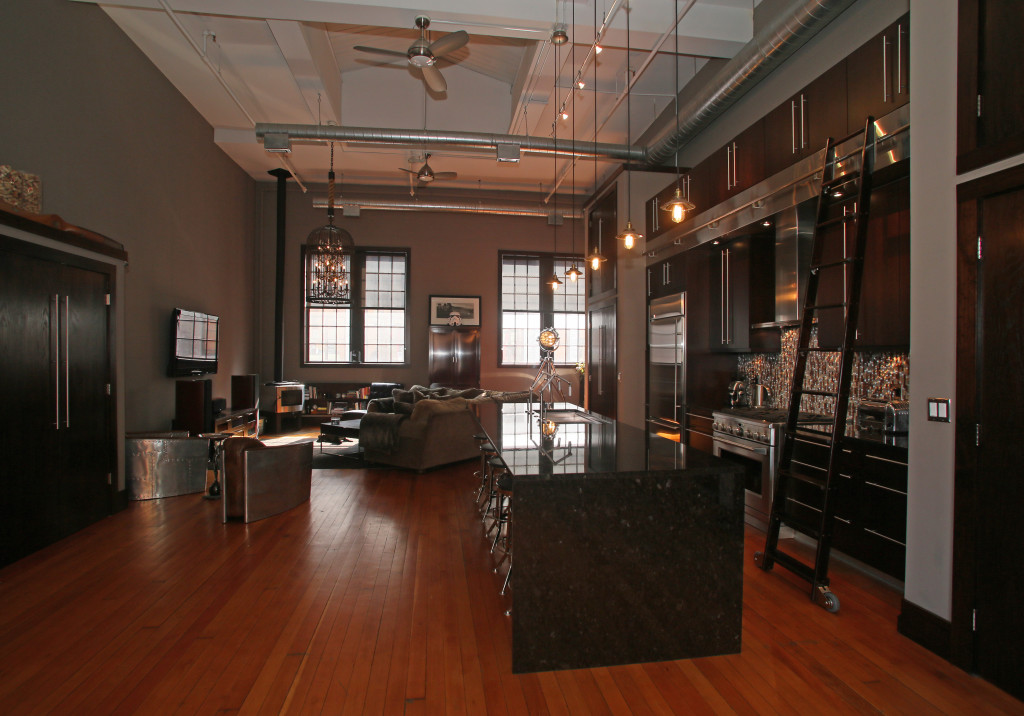 The third-floor condo in the former Firehouse No. 1 across from City Hall was once a handball court for firefighters.
Gloria Wright Photo | Syracuse New Times

The couch was hoisted onto the roof deck with ropes, he said, and then moved down a flight of stairs into the condo.

The deck has a unique feature — a hose tower.

“They used to hang the linen hoses in there to dry,” Szczech said.

The tower has a full bathroom on the first floor. The second floor loft is used to store the outdoor furniture.

Szczech said he was drawn not only to the condo’s history and character, but to the open space and large windows.

“I love the openness,” he said. “When I build a house, it will be just like this.”