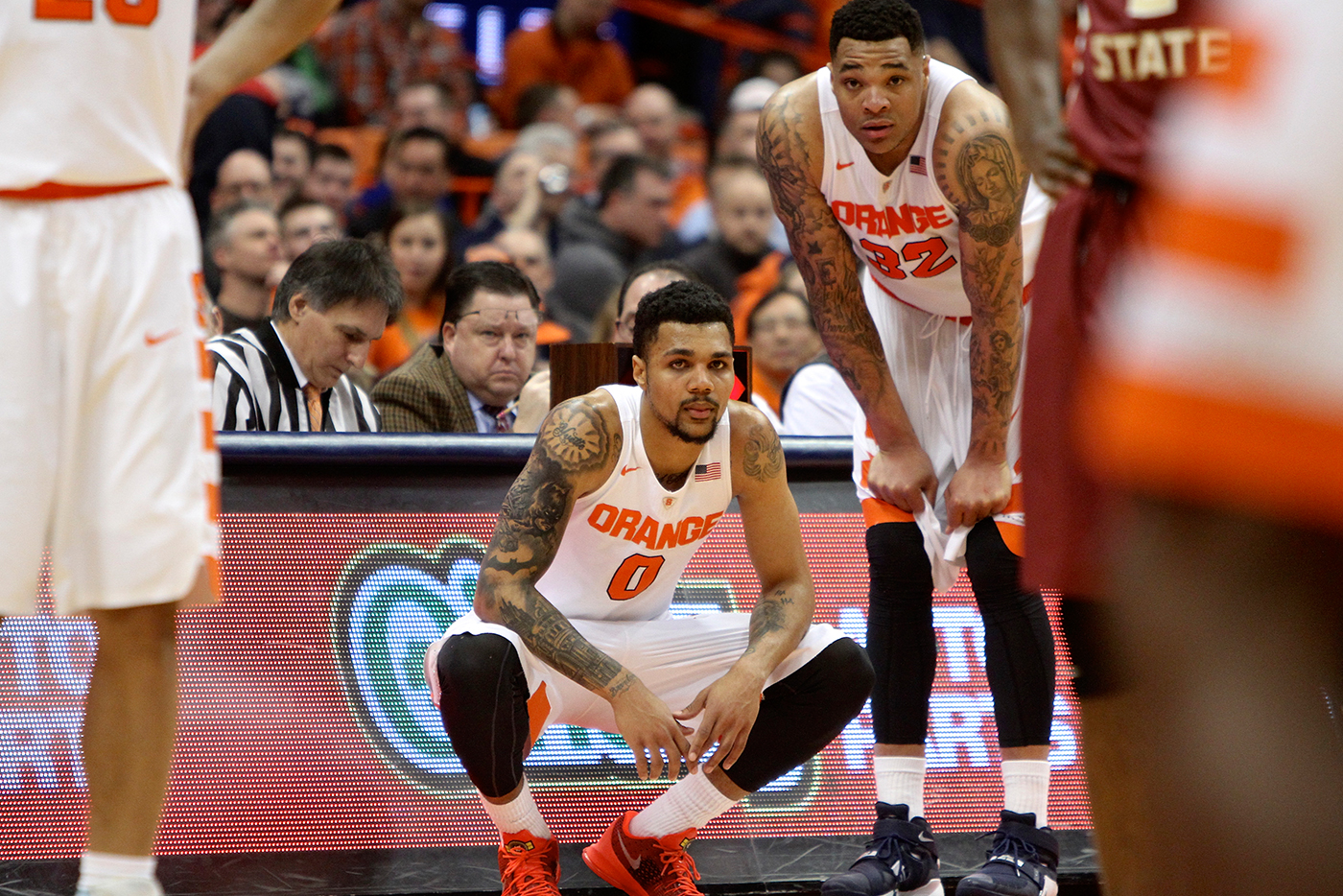 Even as the Syracuse University men’s basketball team went deeper and deeper in the NCAA Tournament, fans who endured this topsy-turvy season kept waiting for the other shoe to drop.

But even when it did, it worked out for the Orange.

Late in the first half of SU’s Elite Eight game against Atlantic Coast Conference rival Virginia on Easter Sunday, March 27, Orange freshman Tyler Lydon stumbled backward and lost one of his 13½-inch shoes. SU’s Michael Gbinije, who has the magic touch with anything and everything on a basketball court these days, calmly tossed the shoe away while dribbling and passed the ball to a wide-open Lydon, who drilled a 3-pointer.

It didn’t seem like a big deal at the time, with SU being thoroughly outplayed and trailing by nine, but the symbolism should have been obvious: Wasn’t it Cinderella who became famous for losing a shoe?

In NCAA Tournament-speak, a “Cinderella” is a low-seeded team that makes a deep run. After rallying from a 15-point deficit with 9½ minutes left to defeat No. 1 seed Virginia 68-62, the 10th-seeded Orange is officially one of the greatest Cinderellas in tournament history.

“Where you’re at isn’t important, it’s where you can get to,” said Orange coach Jim Boeheim. “You can be in a great situation or you can be in an awful situation, and you can still overcome that awful situation. It didn’t look like we would be able to (against Virginia), but these guys, they just made hard plays.” 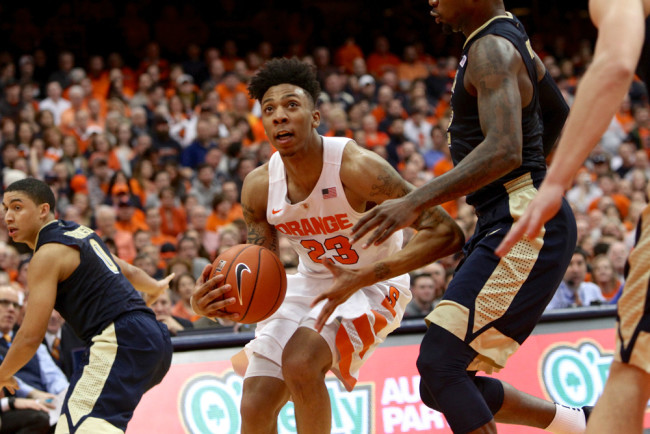 The win over Virginia propelled the Orange into the Final Four for the sixth time in school history, the fifth time under Boeheim, and the second time in four years. And it made Syracuse the center of the college basketball universe as it’s the only school with teams in the men’s and women’s Final Fours.

After shocking No. 1 seed South Carolina in its first-ever Sweet 16 game, the fourth-seeded Orange women’s team advanced to the Final Four with an 89-67 romp over No. 7 Tennessee, one of the most storied programs in women’s college basketball history. The SU women will face another No. 7 seed, Washington, on Sunday, April 3, in Indianapolis with the winner playing in the national championship game Tuesday, April 5. (The TV games will be on ESPN.)

“To be able to do this at this level is something you can never forget,” said Syracuse junior point guard Alexis Peterson. “You can’t really put the words in order because we’re so fortunate, so blessed to be one of four teams standing.”

The men’s team will face another familiar opponent as it plays ACC regular-season and tournament champion North Carolina at about 8:50 p.m. Saturday, April 2, in Houston. The winner will face either Villanova or Oklahoma in the national title game Monday, April 4. (Cable’s TBS has Final Four broadcast rights this year.)

“Man, this is a dream come true for me,” said Orange freshman guard Malachi Richardson, who sparked the second-half comeback against Virginia. “This is something I’ve always wanted to do, and I’m glad I’m able to do it.”

Three weeks ago, when the Orange lost to Pitt in its only ACC Tournament game, it appeared that buying a ticket was the only way an SU player would make the Final Four. Even Boeheim, who said he thought the Orange deserved to be in, admitted that he was “90 percent sure” the 19-13 Orange was out.

But the NCAA Tournament Selection Committee thought otherwise and placed SU as a No. 10 seed in the Midwest Region. Given new life, SU used strong second halves to defeat No. 7 seed Dayton, No. 15 Middle Tennessee (which shocked No. 2 Michigan State), No. 11 Gonzaga and No. 1 Virginia to become the first 10th-seed and fourth double-digit seed to reach the Final Four in the tournament’s 64-team era.

“I mean, I thought we deserved to be in the tournament, but I certainly wasn’t planning on getting to the Final Four,” Boeheim said. “We tell the players, ‘It’s one game. You play one game, and if you can just win one game, you get another chance.’ They’ve done that.”

It was also one game at a time during the regular season, but that didn’t work out as well. The Orange suffered embarrassing losses to St. John’s and Georgetown during Boeheim’s NCAA-imposed nine-game suspension, started 0-4 in the ACC, and lost five of its final six games before the NCAA Tournament. Three weeks ago, the Las Vegas odds of SU winning the NCAA Tournament were 300 to 1. 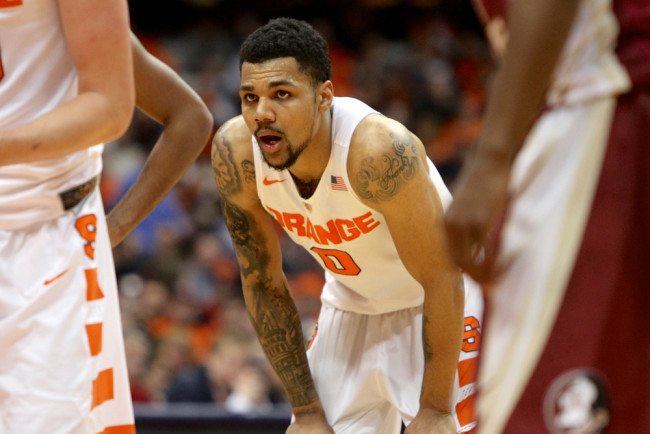 But through it all, the players didn’t turn on each other, continued to play hard, and, while it didn’t always show on the court, they learned from their mistakes. Boeheim credited his two fifth-year seniors, Gbinije and Trevor Cooney, with keeping the team together through the difficult times.

“We had stretches through the season where we couldn’t buy a win, and through that whole session, no one was really getting on each other,” Gbinije said. “Everybody was positive, and just as a teammate, when you have especially me and Trevor doing things like that, it spreads on everybody. I think we did a great job of staying positive, and now everybody is happy and rolling.”

When SU made the tournament, Boeheim said he was never happier on a Selection Sunday because he didn’t think they were going to get in. Now that his team has made the most improbable Final Four run in school history, Boeheim said he has never been prouder.

“They just didn’t give up, they never gave up, they just kept making plays (against Virginia) and Malachi stepped up for a freshman, and then Mike, and then Trevor, then the whole team,” Boeheim said. “It was a whole team effort, and these guys really deserve it. We beat a great basketball team. And I’ve never been prouder in all my 40 years of a basketball team than I am of this team.”

One of former Syracuse University athletic director Daryl Gross’ favorite sayings was “Be Extraordinary,” and it’s something SU women’s coach Quentin Hillsman has repeated often to his teams over the years. Hillsman, now in his 10th year at SU, has engineered the steady climb from a 9-20 record in his first season in 2006-2007 to SU’s first appearances in the Sweet 16, Elite 8 and Final Four this year.

“There’s nobody that plays basketball or coaches basketball that can say the Final Four is not their dream and not what they work for,” Hillsman told ESPN after the Tennessee game. “And to just look back and think, from Day One where we are to this point, Dr. Gross had a lot of faith in me and gave me the head coaching job at Syracuse when nobody would give me a (major college) job.”

In the 80-72 win over South Carolina, which was ranked No. 2 in the nation, the Orange trailed by as many as 13 points late in the second quarter. But led by Peterson’s 26 points, SU set a program record with its fifth win of the season over a ranked opponent and matched the highest-ranked team it has ever defeated. (The Orange beat No. 2 Connecticut in 1996.)

Following the game, Hillsman sounded a lot like his counterpart with the men’s team. “I don’t get confused about it; I don’t think it’s my scheme, it’s them,” he said of his players. “Once they stop playing hard for you and once they’ve had enough and they lay down on you, you’re done. And they’ve never done that, and the kids continued to fight and play hard and let me push them to get to this level.”

To get to the ultimate level, Syracuse will have to defeat Washington for the second time this season. SU tripped the Huskies 66-62 in late November at the South Point Shootout tournament in Las Vegas. Like the SU men, the women will go as far as their hustle and heart will take them.

“Our toughness determines our destiny,” SU senior guard Brianna Butler said. “And so far our toughness has gotten us here.”

All Four One: Syracuse is the ninth different school to have its men’s and women’s basketball teams in the Final Four in the same year. Connecticut is the only school to do it multiple times, with four.