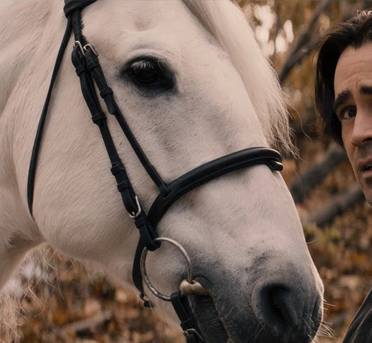 Colin Farrell, Jessica Brown Findlay scurry from the evil and creepy Russell Crowe. My favorite character was that white horse.

As in, time and again during the supernatural tale that writer and director Akiva Goldsman interpreted from the novel by Mark Helprin, I sat in the fairly crowded theater and shook my head.

And although I hadn’t read Helprin’s book, I knew full well that time travel was a huge part of the plot and suspend-belief was the required frame of mind.

The movie starts in 1895, with European parents turned away by the gatekeepers of New York on Ellis Island because dad doesn’t pass his physical placing their baby into the dangerous waters in a makeshift sailboat.

Young Peter mounts a white horse and escapes a dressed-in-black gang led by Pearly, played with scars of the face and spirit by a snarly Russell Crowe.

The horse leads Peter to a mansion, which he interprets as a sign that he must break in. Instead of treasure from the safe, he steals the heart of Beverly Penn, played with beauty and grace by Jessica Brown Findlay.

Beverly is 21 and dying of the fever.

Peter loves her, but Pearly knows it, and attempts to harm her to find Peter and kill him to end their feud. Again, the white horse saves the day.

What follows is a winding, confusing tale of dancing light, bright constellations, anticipated miracles and evil darker than night. Throw amnesia into the obvious symbolism as Peter finds himself wandering in the same New York City. He’s the same age but it’s 100 years later.

And a new cast of women enter his life. Jennifer Connelly is a reporter who sees proof with her own eyes and attempts to bridge Peter’s two worlds.

But Pearly’s back, too, also the same age, and surlier than ever. He’s still conferring with his mentor, too, a secluded guy named Lucifer played with big mean by Will Smith.

The battle is big, truly good vs. evil.

When I walk out, shaking my head, my favorite character was that white horse.

OPENING FILMS: A Valentine’s weekend smorgasbord
OPENING FILM: Go back to Rome, stay up with the Agency
To Top