Craig Duncan, who has been featured on more than 90 record albums, will be among the performers at the North American Fiddlers’ Hall of Fame and Museum’s 42nd annual Fiddlers’ Picnic in Osceola Thursday, July 24, through Sunday, July 27.

Although Duncan, who has written 12 instructional books on fiddling, also performs bluegrass and classical music, his specialty is fiddling.

“He’s the most versatile fiddler we’ve ever had here,” said Keith Hunt, president of the New York State Old Tyme Fiddlers’ Association. “But he considers fiddling to be his bread and butter.” 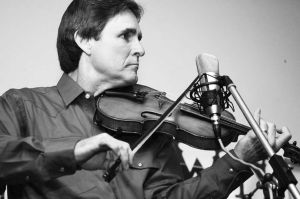 Duncan is one of three featured performers at the event. Gretchen Koehler and Donald Woodcock will also perform and teach at the workshops the morning of Friday, July 25.

Participants and performers play a variety of instruments, including the piano, accordion and an instrument unique to fiddling known as the five-string fiddle, which has one extra string that is lower in pitch.  It commonly substitutes for the viola which, says Hunt, “doesn’t fit into fiddle music very well.”

The event is open to people of all ages and skill levels. Instructors will divide participants into three skill groups. The groups rotate so that every participant can work with each of the artists.

In addition to the concerts and teaching workshops, one popular feature of the festival is “The Fiddle Experience,” designed for those who have never played fiddle but want to try. Judy Hunt, the association’s publicity chair, said this was one of her favorite parts of last year’s festival.

Keith Hunt expressed his desire to attract a younger audience this year.

“Our dilemma right now is that almost our entire audience is from 60 to 90 years old. The biggest question is how to get younger people interested in this art.  We’re going to have a lot of new young players who are very good in the coming years, but who’s going to be their audience? We want to attract people who are between 20 and 60.”

A large portion of the festival is devoted to dancing, which is as integral to the fiddling tradition as fiddling itself.

“One of the reasons we have so many older members is because there was a big upsurge in interest after World War II. Those people grew up playing old time fiddle tunes and doing round dances and square dances,” Keith Hunt said. “The dancing really emerged then. Some of them went out every Saturday night to dance. But after rock ’n’ roll came along, square dancing sort of petered out.”

The organization has had some success attracting children. Many of them, after a couple of years, form their own chapter within the organization.